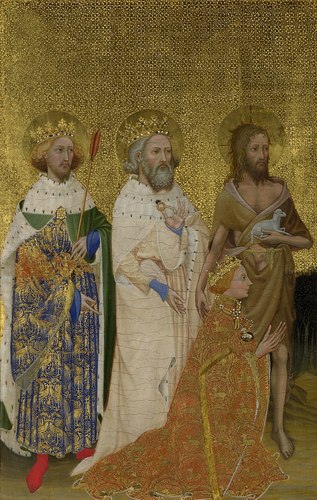 It is important to see the Alliterative Morte Arthure - the fourteenth century poem we now know as King Arthur's Death - as not so much an Arthurian romance but as a reflection on kingship. This is why it was written: a statement of the conflict between religious or spiritual duty and martial or "chivalric" state politics. It is a mirror on the dichotomy of kingship in the late fourteenth century.

In this magnificent poem, we are shown an Arthur whose kingdom is seen by some of his more warlike lords (in particular Sir Cador of Cornwall) as being decadent and in decline. We are shown Arthur's right to rule as being challenged by a Roman emperor far away (who may or may not be seen as one of the two popes of the Papal Schism). When his rule is threatened, we are shown an Arthur who becomes at first bellicose and then almost maniacal in his pursuit of the ultimate victory.

It is in Arthur's curious transition from decadent monarch to semi-despotic overlord, framed within the authorial and contextual legitimacy of Geoffrey of Monmouth's own version of the Arthur story, that the poet cuts to the core of the inherent conflict in mediaeval kingship. A king is placed where he is by God. His position is supported by the church. Yet his power is dependent on arms. The beauty of the spriitual watches over the folly of men, almost speechless at what it sees. 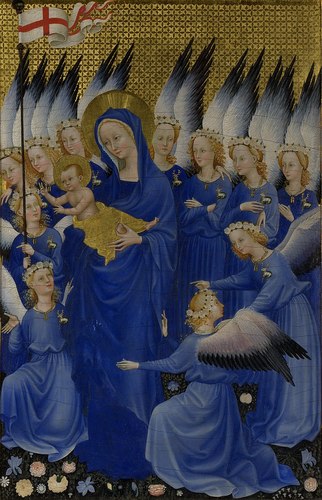 In his manual of chivalry, Geoffrey de Charny observes that a knight's duty is to be the best at what he does, calling on the soldier to reflect on how he is called to war. But, as John Wyclif observed, war in itself cannot be legitimate; in particular, war and killing being driven by revenge. Wyclif maintained that animals do not kill each other out of spite; men have no God-given right to do so either.

Yet King Arthur's Death highlights time and again the failings of his actions and those of his Round Table, an organisation defined by implication as being self-serving and self righteous. The Round Table appears almost as a secular court which takes advice from others but asserts itself through its own morality; in particular the chivalric code. It appears, in this telling at least, to be above God.

In the poem, while Arthur's forces ride riot over Europe, defeating the Roman emperor Lucius and arriving at the gates of Rome, we are left with haunting images far beyond the bloodshed, destruction and devastation he causes. The images which haunt us most are his two dreams (the bear fighting the dragon and Arthur's fate at the hands of Lady Fortune), his betrayal by Guinevere, and the loss of all those knights he holds dear.

The poem, while expressly written to evoke the martial ethos in its readership, nonetheless works in the way of all great literature. It presents an everlasting memory which does not at a first reading appear to be there at all.

In mediaeval imagery and the iconography of kingship, the role of kings is often shown in the same way. Illuminated manuscripts chapter great deeds and chroniclers describe them in manly ways. Yet if we look at church architecture, at more thoughtful art, at the illuminations in books of hours, we see a greater vulnerability and acceptance that God, not man, holds sway. 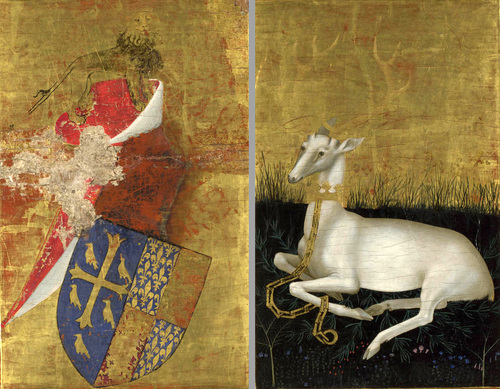 In the Wilton Diptych, which I have used to illustrate this article, I think we come closest to an understanding of the theme which is most fundamental in King Arthur's Death.

We see Richard II kneeling in prayer before the baby Christ, the Holy Virgin and the angels, a devout Christian who dutifully serves Our Lady. We see saintly figures who combine the religious (Saints Edmund, Edmund the Confessor and John the Baptist) with the secular (putative representations of Edward III, the Black Prince and John of Gaunt). We see the exquisite beauty of nature, highlighted by Richard's White Hart in a meadow we might see as Paradise. And we see a great battle helm, symbols of ancestral legitimacy but also of kingly power.

Richard kneels because for all his earthly vanity and later despotism, he quakes before the whim of God. Arthur, in this poem, acts out the vanity of man but is punished by the will of God. He loses everything.

In the writing of this astonishing poem, so rich in symbolism and meaning, which English king of the fourteenth century did our poet have in mind?

PS - one of the pledge options available for King Arthur's Death features Richard's White Hart; two have been sold but three more are still available, if you have not yet pledged and would like to pledge at that level (or existing pledgers can upgrade, or add to, your current pledge). The book is now only 13% away from being fully funded - do please help spread the message so that once more this magnificent tale of the folly of kings (or indeed political leaders) can be told anew! 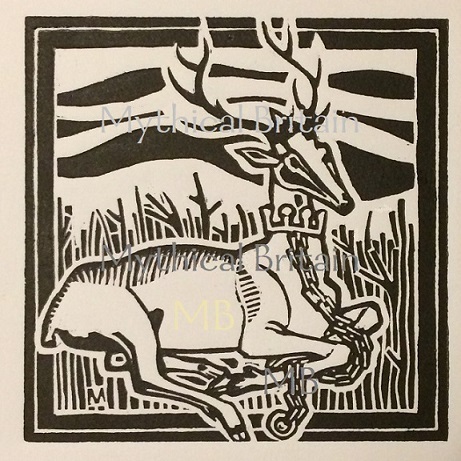 Images of the Wilton Diptych:

Source - Wikipedia; images are in the public domain. The original of this astonishing portable altarpiece is to be found at the National Gallery in London. It is a work of exquisite beauty and spritual depth.