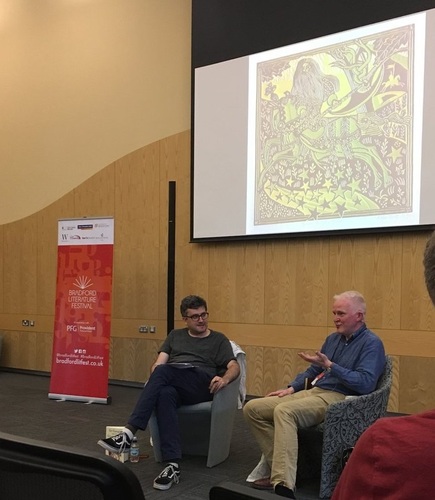 Recently, I appeared in a discussion at the Bradford Literature Festival with Daniel Hahn discussing my new translation of Sir Gawain and the Green Knight (also published by Unbound). In just one afternoon, I realised that the work I had been involved with for the last five years had suddenly become something - a serious translation. My next project, King Arthur's Death, has taken on a new responsibility...

Up until this point, I had often felt that my work translating Middle English alliterative poetry was simply some form of "calling"; something I had stumbled upon. It was something I was drawn to do and, by dedication and ruthless attention to detail, had to deliver to the best of my ability. However, this is only part of the story.

Three key moments stand out from that day in Bradford. One was Daniel's assertion that you can't just be a translator, you also have to be a writer. The second was an audience question asking about what makes a translation "authentic". The third point is that every translation has a validity and relevance of its own.

All three points made me appreciate that in my work I had actually done something signficant: I had taken a piece of historical literature and re-written it, re-presented it and tried to make it sing its song afresh. In my own voice. An interpretation, so to speak.

Daniel's point about a translator being a writer is crucial. A writer brings their own flavour and voice to interpretation. While, until now, I was not a published "writer", I had in fact written a great deal. The bulk of my professional life had been spent as a copywriter - interpreting the value of things and making them relevant to customers (books, legal documents, museums, galleries, you name it).

This is not an easy skill. A good friend of mine from America, Alan, wrote the immortal line "In Space No-one Can Hear You Scream" for the film Alien. In one sentence, he had created the horror on board the space ship Nostromo. That is the skill of the copywriter.

None of my work ever reached that level but, as fellow copywriters, Alan and I shared our successes and failures joyously - and we still do; he never stopped encouraging me in my work. He believed in the power of the writer and recently emailed me some heartwarming words about Gawain (with just a little of the ribbing we like to give each other):

I am honoured by Alan's comment - because not only are we both copywriters but are, by our nature, interpreters, and this is important. The writer/translator point is complex: if all you do is translate something without knowing its context, its original form, its own cultural references, then it becomes very hard to make it relevant to the reader in the language it is being translated into.

To translate without somehow conveying the sense of the piece leaves the end result somewhat dry (akin to those translations from the Victorian period when we try to read them now - translators then were also trying to relate, somehow, to their own cultural times). So a challenge for the translator is indeed to interpret and to write - and that is not easy.

I didn't answer well but, having spent days thinking about it, I've realised that this ties into the point discussed above. With Gawain, part of the authenticity is about coming from the same part of Britain as the Gawain-poet; with King Arthur's Death, I can no longer make such a simple claim.

The authenticity of the translation, in the case of the Alliterative Revival of the fourteenth century (of which both Arthur and Gawain form key parts), must draw on multiple elements: the alliterative technique; the sentence structure (with half-line caesura); a detailed knowledge of the fourteenth century; an awareness that nationality today differs from that back then; that there were four regional writing dialects; a knowledge of references (saints, military methods,).

The technique is then to feed these into the work so that the sense of the original is conveyed to the reader even though the world today has moved on. But also, behind this, must a lie a belief - a belief in the original work; a passion for its voice and message. A real belief in its continued relevance to us today.

The validity of each and every translation

Finally, I come to the issue of validity of all translations. Sometimes, when you are incredibly wrapped up in your work, it is very difficult to appreciate the work of others. Often, the challenge is NOT to be the same; to be wilfully different. In Gawain, I referenced many translations of the poem in testing my own method of writing. All these translations were helpful (and are mentioned in the bibiliography at the back).

My method of translating with Gawain, and now with King Arthur, has been to write in a style such that if the poet came back today he would be able to understand the poem if speaking today's English but applying it to his own reading conventions. This was the voice I wanted to bring to it.

Hence, I follow the tense of each line, irrespective of whether it is past or present. I use original words where they are relevant (e.g. the schiltron - a formation of spearmen - in King Arthur's Death). I incorporate a metrical caesura. I read each line aloud to myself to test its rhythm and to see where the alliteration falls. I test the rigour of the translation against the original (which often may be missing verb or sentence structures we use today).

And I also add that little something extra - I produce linocut prints designed to reflect what I see as the overarching voice of the poem. In Gawain, there is a certain whimsy to the work. In King Arthur, there will be a new style of linocut work; what I am calling a Kathe Kollwitz-inspired Art of Darkness. The artwork, in some way, symbolises my thinking behind the way in which I have translated the poems.

My approach is not the pursuit of purity; it is a reflection of how I feel about the original writers and their world. It is my own angle on this type of work, out of which comes forth a voice.

Thank you once again for your support with this journey into the fourteenth century. If you know of others who would like to support my new translation of King Arthur's Death, please do let them know. It will be a distinctive work and one which I hope will bring alive this magnificent epic of battle and betrayal alive again for our own troubled times.

Translator, Printmaker and Champion of the Alliterative Revival