King Arthur's Round Table Celebrates Christmas - but then, strangers arrive...

In the English literary tradition of the Middle Ages, Christmas is a time of huge significance and symbolism. With King Arthur’s Death, as with Sir Gawain and the Green Knight, the warmth of the holiday period is beautifully conveyed; a time when lordly households drew in on themselves in the midst of winter, and maybe hear of strange tales and magical stories…

Following an introduction to the life of the great king, making us fully aware of King Arthur’s status in the pantheon of British kings, the poet of the Alliterative Morte Arthure (King Arthur’s Death) begins his epic tale of the fall of kings with the Round Table celebrating Christmas. Why is the relevant?

Both the Arthur-poet and the Gawain-poet were both masters of their craft. They blended deep knowledge, literary craft and a substantial sprinkling of political allegory into their work.

By beginning King Arthur’s Death at Christmas, the Arthur-poet firstly follows in literary tradition. Here, we are numbed into thinking that what is about to be related is a conventional romance in the Arthurian tradition. We see Arthur as we expect to see him: powerful, generous, a man who has built a Great Britain of his own and who is loyally served by kings of all his domains. This is a munificent Christmas: good kings are generous to a fault, and well loved.

The Arthur-poet also plays along with social convention. Lords and kings were peripatetic, holding court in different parts of their kingdom. This particular Christmas time, we join Arthur at Carlisle, a city long associated with the Arthurian canon (and with many Arthurian links even today with local monuments and stone circles). He is not an isolated king sitting aloof in the south of Britain but is very much at its centre, commanding respect wherever he goes. So we are seeing Arthur as a king of good governance.

From a literary perspective, the poet also sets his poem at Christmas because this is a period of quiet, also of jollity and happiness. This is a crucial literary device to enable the shock of what is to happen next. In the case of Sir Gawain, the Green Knight arrives after the first course of a magnificent dinner; in the case of King Arthur, Roman emissaries arrive to demand the king pays homage and tribute to a much greater earthly lord.

This latter element brings us into a much deeper understanding of the Christmas setting and its purpose in making the poem so powerful. As an allegorical work, in this case one with significant anti-war credentials, King Arthur’s Death sets itself at Christmas also to remind us that a much greater king than any born on earth is born at Christmas time. As the poem progresses, and Arthur’s overweening pride and quest for dominance over-rides his Christian ethics, he is destined to fall as he chooses earthly magnificence over religious observation and spiritual guidance.

In conclusion, the Arthur-poet, like the Gawain-poet, has a greater mission than just telling a tale. He writes from a Christian standpoint at a time (during the Hundred Years War) when western Europe was in turmoil. He reminds us of a need for greater humility and warns us to steer clear of worldly desires. This is King Arthur, a magnficent King Arthur, but this is also a King Arthur as warning: beware the traps of self delusion, for in them lie disaster.

Happy Christmas from me! 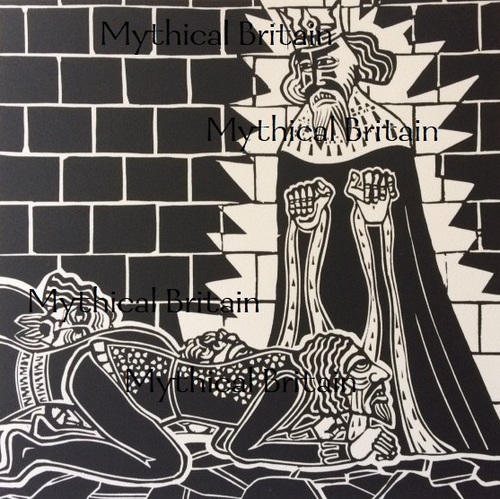 (above, Arthur is angered by the Roman emissaries who disrupt his Christmas - one of the illustrations from my forthcoming translation)

Thank you for supporting my work on King Arthur’s Death. My work on this stunning poem is progressing and funding for the project is now at 62% with 198 backers (every patron appears as a supporter in the back of every copy of the book - including the standard editions later sold in bookshops and online).

I have already produced 10 of the 32 linocuts I will be using to illustrate the book (not forgetting the linocut illuminated letters as per my translation of Sir Gawain and the Green Knight), and I am currently about 78% the way through my first draft of the translation itself. I’ve also been creating some new pledge options as well (including personalised illuminated letters) so do take a look at those if you would like to make a more personalised pledge or to upgrade.

In the meantime, may I thank you for all your support for my work over the last year (including those of you who have also supported my translation of Sir Gawain and the Green Knight ; without the support of every patron, the book would never have been able it reach the much wider audience it is now enjoying via the standard edition available in the shops).

I would like to wish you all a very peaceful and Happy Christmas.

PS – I hope you enjoy the short film accompanying this update. This is the moment in King Arthur’s Death when the Roman emissaries arrive with their demands to spoil Arthur’s Christmas. A translation of this passage (from my first draft) appears below which you can read as the film plays. I hope your Christmas dinner passes more smoothly, whether you are in Carlisle, Camelot or wherever!

Then after, at Carlisle,    Christmas he keeps,

This self-same conqueror,    where they held him as lord,

With his dukes and best Dozen Peers    of diverse realms,

Earls and archbishops,    and others enough,

Bishops and bachelors    and noble baronets,

Who bow to his banner    and do his bidding:

But on Christmas day,    when they were assembled,

That comely conqueror    himself he commands

That each lord should linger    and not take his leave,

Till the tenth day was taken    in full to its end.

Thus in royal array    he held his Round Table,

With spectacle and splendour    and sumptuous meats;

There was never such grandeur    in no man’s time

As made in midwinter    in the West March!

But on New Year’s Day,    at noon precisely,

As the boldest at the board    were served of their bread,

So suddenly entered    a Senator of Rome,

With sixteen knights in harness,    attending to him.

He saluted the sovereign,    and also that hall,

As king to a king,    and made bows inclining;

Guinevere in her degree    he greeted as he pleased

And bowed again to the King    to deliver his message:

Salutes you as subject,    under his great seal;

Here are its credentials, Sir King,    with its fierce words,

In truth it’s no trifle,    as his shield here shows!

Now on this New Year,    as signed here by notables,

I summon you in this hall    to sue for your lands,

That on Lammas day    and with no hindrance

You be ready at Rome    with all your Round Table,

And appear in his presence    with all your prized knights

At the Prime of the day,    on pain of your lives…