King Arthur's Death - was its writer a mediaeval Quentin Tarantino? 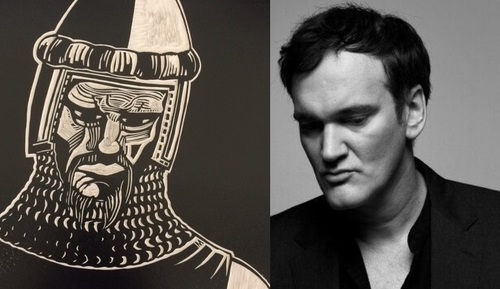 King Arthur's Death - the Alliterative Morte Arthure (the AMA) - is a 14th Century poem unlike any other. Its contrast between the banal and the heroic, the violent and the natural, gives this anonymous poet the style of a mediaeval Quentin Tarantino. His work is truly groundbreaking and utterly astonishing...

For me, the appeal of King Arthur's Death is that it is hugely divorced from the Arthurian canon we see in our imaginations. It isn't courtly in the way of Sir Gawain and the Green Knight. It isn't the stereotypical tale we might imagine from the grail stories of Chretien de Troyes or Wolfram von Eschenbach.It isn't written like any of the stories on which it is based.

So, when I was talking with a friend about this and he mentioned that it made him think of some of Tarantino's films, I started to think a little more about the man who penned this magnificent poem some six hundred years ago. His unconventional approach, dark sense of humour and his implied rejection of the chivalric idea were all certainly different. If he was a mediaeval Tarantino, he was a poet many years ahead of his time.

A poet who pleases himself.

The poet - let us call him the AMA-poet - was a man who worked an independent line. Like many poets of the Alliterative Revival, he was regional, and had roughened edges.

He borrowed from other stories and adapted them to his own ends. He doesn't appear to be part of the establishment and he had dim views about the way kings behaved. He seems at times to be contemptuous of life; we might even consider him to be cynical. His characters show genuine traits and also play with language. Occasionally there is spiritual magic; there is also self doubt and fragility.

Certainly, he wasn't trying to please some lordly patron; he doesn't seem interested in that. Arguably, instead, the AMA-poet chooses to please himself.

A director who knows the value of words

If we look at Tarantino's canon of work, we see similar traits. Chracters are close to reality, not full of cliche. The dialogue is interesting, even when the subject matter is banal. He uses humorous undertones (violent deaths or brutal medical procedures). His characters are highly stylised. He borrows from B-movie culture. There are elements of absurdity. His films exist as a dark parallel to the nonsense and vanity of a Hollywood grown decadent  with its own excess.

Some say that, above all, Tarantino is a writer rather than a director. Irrespective of the methods he used in making his films, his output is remarkable, different and highly influential.

As my work on King Arthur's Death has progressed, I have become transfixed by what I see as the AMA-poet's skills in portraying the Art of Darkness. This darkness goes deep into the human soul and the depravity of man.

This is not unusual for its time (the contemporary Siege of Jerusalem, for example, has a particularly obnoxious reputation for being both sadistic and anti-semitic). However, in King Arthur's Death the focus is on war and the failings of leadership. We are shown all that is horrific in war while also seeing it draped in a sophisticated dark humour, not unlike Tarantino today.

The poet's work is almost surreal in the way it contrasts a sudden violent act with deeds of pure noncholence. For example, when Sir Lancelot strikes Sir Lucius, his brutal attack is notable by his casual lack of remorse: :

He pierces the paunce      and the plate and the mail

Such that his proud pennon     plunged through his paunch!

The head hailed out behind,     more than half a foot,

That hard weapon had cut     through hauberk and haunch;

He strikes to the ground     that strong man from his steed,

Struck down a standard     and strolls back to his men.

It is almost as if Sir Lancelot is saying, in that great Midlands put-down, "have some of that". We are reminded of a casual shooting or some other scene in a Tarantino film where the villains then simply carry on with what they were doing before.

Written somewhere in Yorkshire or Lincolnshire around 1400, King Arthur's Death also has a pithy language which is immediately accessible to provincial audiences. It is also designed to excite. While the poem, at 4500 lines, might appear daunting in length, the dialogue is written with pace and always wakens us up and growls from within. Here, for example, the Roman Sir Gayous is furious with the British:

“These Britons were always     just braggarts of old!

Lo! How he blurts     for all his bright clothes,

That he might slay us all     with his spangled sword!

Ha! He just barks to boast     that boy who stands there!”

Here, we can see the poet not only captures the rage of the Romans but also immediately excites in the (then English) listener the need for revenge. His simple language carries the story ever onwards in a manner which appears simple but is in effect highly sophisticated in the way it plays with emotion without us necessarily being aware of what he is doing.

Although we might not care for Sir Gayous, he draws us into the next scene, and - humourously for the intended audience - his own immediate demise.

Gawain, in quick response to Gayous, pulls no punches:

Sir Gawain was most grieved     at these arrogant words

And goes to that knight     with a growling heart;

With his steely sword     he strikes off his head,

Then leaps on to his steed     and sets off with his men.

The poet, as we saw with Sir Lancelot, lets Gawain commit a brutal deed and then, in an almost surreal manner, gallop off. Such cameos have great dramatic effect in our mind: life is short and not particularly sweet. We are asked to consider it as almost inconsequential.

If we reflect on actions like this as a statement of the banal, rather than the deeds of a literary hero, then we can begin to see that behind the poem is a much greater message. There is a tiredness in all that is destructive.

We know from our own times that bloodshed and violence in films - let alone the depraved horror of world events - have often inured us to the brutality of war. Hence, we can see this magnificent poem as a pastiche of the Arthurian romance, almost a pastiche of war itself.

A Tarantino of his time?

Of course, it would be misleading to suggest that in the fourteenth century there was a group of poetic or artistic glitterati wandering about England demanding attention and grabbing the limelight. Yet, even though most of the poets of the Alliterative Revival remain anonymous, it cannot be said that these poets were actually anonymous.

They had friends and circles and they were clearly well known - if only by their output (as we know via Chaucer). The Alliterative Morte Arthure itself carries the name of Robert Thornton, although this is the name of the poem's 15th Century transcriber who added it for his own reasons.

So it is that we must consider the poems of the Alliterative Revivial as not simply works which somehow have survived the centuries. We mustn't see them simply as attributes of an age with aesthetic cues, like we might see a jewel or a crown. Instead, we must view them as the products of real people with real views and aims.

What makes the AMA-poet interesting to us - and his telling of this Arthurian tale most intriguing - is that he has a distinctive voice. He is critical, ascerbic, reflective and challenging. He borrows from others and dumps it in our face in a new and pithy form. His dialogue is blunt and amusing yet manipulative and utterly credible. He dredges the dirt from the darkness of our minds and shows us human frailty for all that it is. His voice is truly unique.

Like Tarantino today, he shows what  it's like to live right on the edge of what we deem morality to be. Unlike Tarantino, he was writing 600 years ago - when even his own life might have been on the line for being critical of the establishment.

The AMA -poet's work can be taken at face value, as some form of epic tale of bloodshed and betrayal. However, to do so alone would be a mistake. This magnificent poem is in fact deeply sophisticated. Without us knowing it, this poet has shown us how uncultured and base we truly are. He had specific aims and a message for his time which still resounds today.

Translator, Printmaker and Champion of the Alliterative Revival

PS - This new telling of King Arthur's Death can only happen with your support. If you've yet to pledge to bring this new telling of King Arthur's Death alive and would like to do so - and have your name in the back as a patron (as well as receiving the Unique Collector's First Edition when it is published) - please pledge your support on this page (there are lots of great pledge rewards to choose from too!)