King Arthur - did he let pride get the better of him? 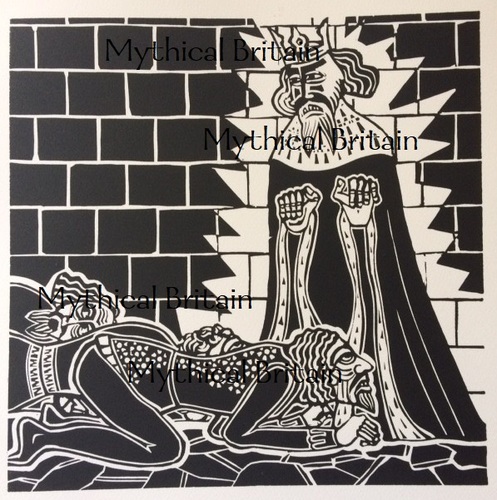 King Arthur's Death is an alliterative poem which at once celebrates the triumphs of King Arthur while also demanding of the reader they address their views of war, ethics and morality. If the first half celebrates the former, the second half is when we are left questioning our own moral compass. At what point does Arthur the King become Arthur the flawed man?

This magnificent poem of 4000 plus lines, written c.1400, can justifiably be structured around the theme of just war, and unjust horrors of war. While there are deeper contemporary themes, which I will discuss in the introduction to my book when it appears, we can see that the poem pivots almost at its centre, with the issue of the justice of war being critical.

In the first part, we see Arthur's legitimacy questioned by the Roman Emperor, Lucius. Lucius claims that Arthur has no personal rights to his lands and that he only rules them out of fealty to him. So, Arthur - referred to often as "The Conqueror" in the poem - seeks the advice of lords, lawyers, prelates and others in a manner not dissimilar to the "legal advice" sought to justify today's wars. The poet portrays Arthur as having legitimate grievance and is therefore justified in fighting his aggressor, whom he subsequently defeats and kills at a point half way through the poem.

In the second half, things start to go wrong for Arthur. He campaigns against the Lord of Lorraine who he claims is a traitor. Through more brutal acts, he finally defeats his enemies and appears to be at the apogee of his triumph. Yet this half is broken by two mystical incidents: the first, a curiously brutal, yet spritual encounter between Sir Gawain and the strange Sir Priamus; the second, the great dream of Arthur, where the king encounters Lady Fortune who tells him of his demise. Sure enough, at the height of his powers, Arthur is told that Mordred has taken over his kingdom. A return to Britain and his epic final battle awaits.

The poem pivots majestically at a key moment. When he defeats the Romans at the end of the first half, Arthur takes the decision to send the bodies of the Emperor and sixty of his kings back to Rome, fully preserved. This is a humiliating act: The coffins are transported across Europe led by shorn, unarmoured and penitent Roman senators, each coffin carrying its own heraldic bearings and banners. In the language of international heraldry (and diplomacy), Arthur is telling the world that its greatest lords have been annihilated.

While we might see this as a demonstration of victory, to the mediaeval reader this is made worse: the captives have not been ransomed (as was normal chivalric practice), they have been slaughtered. And Arthur wants the world to know it. From this point on, his campaign has become unjust. We only need to read of the reaction to the killing of the prisoners at Agincourt in 1415 to understand how this would be seen in contemporary circles.

This crucial moment, when the Arthurian worm turns, is created with great tension, in this excerpt (from my translation) when the senators return to Rome with their grisly "tribute" (the "tax" Arthur deems his payment);

Now they ride to Rome     by diverse quick ways;

Bells clang in the Capitol     to summon the Commons

And sovereigns and senators     who rule that city.

They committed their carriages,      caskets and more,

As the Conqueror had commanded,     repeating his cruel words:

“We have trustfully travelled     to fetch here these takings,

The tax and the tribute     of ten score winters,

Of England and Ireland     and their outer isles,

Occupied as we speak     in the west by King Arthur.

To battle for Britain     nor in his broad lands,

Nor seek tax nor no tribute     nor no kind of title

Save such treasure as this     while his time lasts.

We have fought in France     and foul things have hurt us,

And many of our fair folk     are believed fallen dead;

No chieftain or chivalry       achieved an escape

But were chopped down in the chase     as chance so befalls!

We say ready your stone stores,     strengthen your walls;

It's war, Arthur, but not as we know it

At the beginning of the poem, King Arthur condemned Sir Cador when he himself argued for war, using a similar phrase ("Now wakens the war") to lift Britain out of its complacency. Now, with Arthur proud almost beyond hubris (what the Gawain-poet called "surquedry"), he burns fire and fury. He seeks war for killing, not by any rights commonly accorded to kings by Pope or priest.

King Arthur's ultimate demise, then, rests on his rejection of Just War and his projection of personal power. In recent times we have seen similar excesses; and, sadly, similar unbounded hubris dressed up as righteousness in order to justify them. Plus ca change...

I am hugely enjoying working on King Arthur's Death. The poem itself is stunning and original, with great power and presence. When the book appears, it will also be embellished with detailed notes and a historical insight into the themes which lie behind it (not unlike the way I approached my translation of Sir Gawain and the Green Knight - now available in Foyles, Heffers, Blackwells, the British Library and myriad other places if you've yet to see it). Like Gawain, it will also be illustrated throughout with my linocut prints and illuminated letters.

But the book can only happen with the help of the pledges of backers and patrons. If you've already pledged, please do spread the word to others who might be interested (don't forget, you can also upgrade your pledge too if you wish). If you're coming across this update for the first time and have yet to pledge - there's a whole range of different pledge rewards to choose from (including original prints, greetings cards, giclee prints and much more). Someone of lordly largesse can even be the Main Patron (with their name at the FRONT of the book) if they wish - the Arthur Crown pledge!

But whichever level you choose, I am immensely grateful for your support. This great poem, fabulously illustrated if I say so myself, cannot happen without you.

In the meantime, as they say on the battlefield, "Banners Advance!"

(Image: King Arthur's initial rage when the Roman senators first arrive in Britain at the beginning of the poem - one of 32 linocut illustrations I shall be preparing for the work).