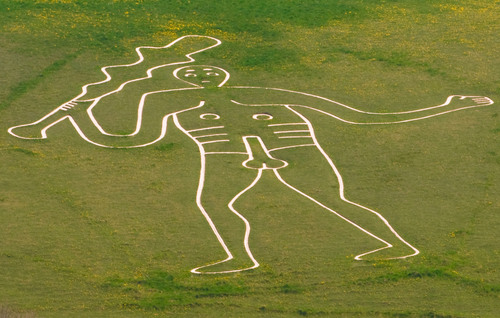 Above: The Cerne Abbas Giant in Dorset -  the basis of, or a model for, the predatory rapine giant in King Arthur's Death?

Giants and ogres are a common feature in mediaeval literature and in King Arthur’s Death (the Alliterative Morte Arthure) we are shown one who is surely one of the most gruesome to have been created. How did the poet manage to create such a vile beast, and one who remains forever in the minds of those who read about him?

When Arthur lands in the Cotentin, he is approached by a Templar who tells him of a monstrous creature who lives atop Mont Saint Michel. This creature has no morality and no amount of money can pay him off. He gorges on the children of noble families and is content to rape all the women thereabouts in satisfaction of his filth (sin). He has recently stolen a local duchess. As the Templar relates,

“Sire, do you see that far headland     with those two fires?

There dwells that fiend,     unbound in his doings,

Which carpets the cliffs     with its cascading waters;

There you will find folk     left dead without number…”

The description is magnificent: the giant is shown as unassailable, vile, living in a smoke-filled landscape with bodies strewn all over the place. It is a dreadful place and, with magnificent drama, the poet has it set by a spring which gushes pure water. The poet sets horror high in the sky, surrounded by the purity of the watery springs. This is a place where virgins are despoiled and every depravity of the human condition can take place. It is a hell on earth.

When Arthur hears of this, he is horrified that such monstrous deeds have occurred in his lands and is determined to put things right. With a great irony, for which this magnificent poem is well known, Arthur decides to go on a secret “pilgrimage” to surprise the “saint” (the giant) and takes with him only two of his knights, Sir Kay and Sir Bedevere, his sword-bearer.

Before he scales the heights alone (again building the drama), Arthur passes through a beautiful forest where birds flash and cuckoos sing. This is a classic mediaeval technique: showing exquisite beauty before describing horror. We experienced this in Sir Gawain and the Green Knight and we do so here too:

Then they rode by that river     which ran so swiftly,

The roe and the reindeer     ran freely there

And bushes and roses     grew rich in a riot…

Why does he do this? It is to place the beauty of God’s creation before the horrors wrought by man. It shows us peace, beauty and the boundless joy of creation which will be shattered by what happens next; a magnificent build-up of tension.

Next, Arthur climbs alone to the top of the clough and meets an old widow there who tells him to approach the giant from downwind because he can smell people from six miles away. We are slowly but surely made aware of just how horrific this creature is. As the widow says:

To cross yourself for safety     on account of his size…”

As he approaches the giant’s lair – a hairy, naked monster 30 feet high with skin like that of a frog and hound-fish, and who enjoys warming his buttocks against the flames while gnawing of the flesh of freshly-spitted boys – he is repulsed by the sight in front of him:

There were roasts full rude,     and rueful turned flesh

Of boys and beasts     being braised on a spit,

And a cauldron crammed full     with christened children,

This dark place is indeed the stuff of nightmares: body parts strewn about, maidens forced to roast the meat only to be raped later, cauldrons full of bodies, smoke all around. 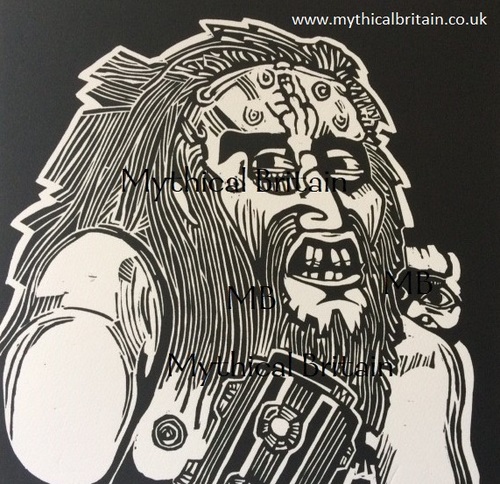 Then Arthur challenges him and a fight ensues, the description of which pulls no punches as swords plunge into intestines and Arthur slices with his sword right down to the giant’s genitals. Eventually, the club-wielding giant (whom we might imagine as that at Cerne Abbas in the county of Dorset) is slain, and Arthur survives his first test.

This whole scene, lasting several hundred lines, is a masterpiece of the Poet’s art. He finds countless ways to express the action using his own alliterative lexicon yet this does not at any point become arcane or abstract.

He evokes atmosphere, horror, revulsion, beauty and drama; at the same time, his own ironic twist – including his evident contempt for the miraculous deeds described in the Arthurian canon – make his storytelling compelling yet wonderfully ambiguous in its aims.

While the poem is an embellishment of the stories in those of Geoffrey of Monmouth, there is no escaping the fact that this anonymous poet, with his ironic, distant standpoint, created a new, distinctive and more vibrant poetry.

This is one of the main reasons why, after Sir Gawain and the Green Knight, King Arthur’s Death (the Alliterative Morte Arthure) is widely acknowledged as a masterpiece of the alliterative canon. If only we knew who the original poet was, and why he wrote the way he did.

How tired was the mind that knew of war and all its many horrors?

Be a patron of this major new translation, illustrated throughout with linocut prints

King Arthur's Death is one of the great poems of the Alliterative Revival of the fourteenth century. This new crowd-funded translation follows on the back of my translation of Sir Gawain and the Green Knight (Unbound, 2018) and, like Sir Gawain, will be richly illustrated throughout with linocut prints I have specially produced for the book (like the one shown above).

If you would like to support the book, and have your name printed in the back as a patron, please do pledge support. Every pledger receives a de luxe copy of the book (different to that sold in the shops) and there is a range of pledge rewards for higher donations to the project.