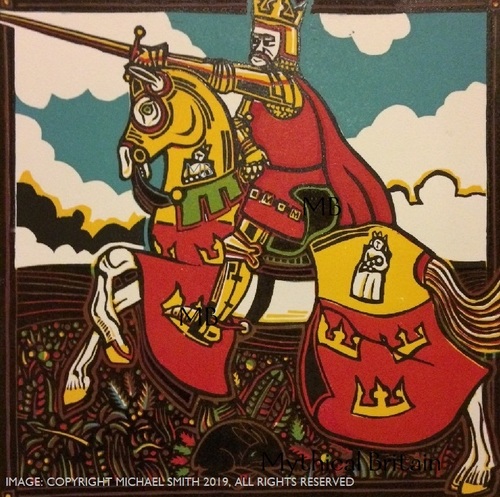 Most writing, whether wilfully or otherwise, often paints a picture of its own time that, as the years go by, begins to lose its context and therefore its original meaning. Thus, with King Arthur's Death (the Alliterative Morte Arthure), it is the duty of the translator not only to tell the story as originally written but also to reveal the context behind the story which confronts us today.

Readers of my translation of Sir Gawain and the Green Knight will know that I am as much interested in the history as I am in the poetry; with my translation of the Alliterative Morte Arthure, I have gone to even greater depths to unravel the messages which talk to us from six centuries ago.

Here is a poem unpicked from the primitive Arthurian cloth patched together from earlier components by Geoffrey of Monmouth in the twelfth century. On its structural warp and weft, our Arthur-poet has knitted in strands of Wace and Layamon, stitched in a touch (but just a touch) of the romantic Arthurian canon, and then woven it all together into a glorious fourteenth century tapestry, richly decorated with astonishing attention to contemporary detail.

This King Arthur is a fourteenth century hero, recognisable to its own audience, with knights and lords, castles and courts, as a contemporary would have expected them to be. This was not a retelling of an old story but the application of an old story to the circumstances of the time.

The devil is in the detail

The detail, innocent in its display, serves now to tell us of its writer and its times. The poem’s references to international travel, to methods of warfare, all help to place it in the second half of the fourteenth century. Yet other clues allude to Milanese politics under the Visconti, to John Wyclif, to Lollardy, to anti-war and Just War theory and even the alleged infidelity of Joan of Kent, wife of the Black Prince and mother of Richard II. Richard’s vainglorious pursuit of the seat of the Holy Roman Empire is also referenced indirectly.

By skilful interpretation of the poem’s many allusions, it has been possible in recent years to date it to between 1375 and 1402. Depending on how the detail is interrogated, it is possible even to narrow the writing period to between 1400 and 1402. In essence, this is a poem most likely to have been written in the reign of Richard II or, crucially, during the early years of Henry Bolingbroke, the Usurper King, Henry IV.

What was the poet trying to do?

Why re-write a strand of the Arthurian canon, knit into it a rich fabric of contemporary detail, and then tell it anew as part of the alliterative revival of the fourteenth century?

Here is, potentially, protest poetry. This is not Latin or French but English. This is not Chaucer and courtly but Lincolnshire. This is a reflection on a time, a time of political uncertainty, of the horrors of war, of a vain and tyrannical Richard or, if actually written in the early years of the fifteenth century, of an uncertain Henry.

This was a time too when England was tired of war and its cost, a time when chivalry itself had come to be seen as an extravagance and almost an irrelevance. Certainty of monarchy is seen as essential, justice and balance viewed as critical. Overweening pride – what the alliterative poets called surquedry – is the enemy of kingship and of justice.

The poet has not written an allegorical work but created a work of reflection, disguised as an interpretation of the stories of Geoffrey. In a poem where Britain wakes from its slumber, confronts the power of Rome and then through victory turns ultimately against itself, the Alliterative Morte Arthure acts as a magnifying glass on a society in self-doubt and inner turmoil.

Strangely, its setting and commentary seem vaguely familiar. In highlighting the calamitous consequences of kingship driven by hubris, of politics driven by nationalist fervour, King Arthur’s Death, the anonymous Alliterative Morte Arthure, is as relevant today as it ever was.

PS. At the time of writing, I have now returned the copyedit to Unbound which means the next step in the life of this book – a book which can only have happened with your help – is the page proofs. I hope to have news of these in the new year. When the once and future king comes to life once more in this major retailing of one of the fourteenth century’s finest alliterative works.

PPS if you know of others who would be interested in this new translation and would like to have their name printed in the back as a patron, please do share this update with them. Alternatively, why not pledge on behalf of a friend or a loved one as a special gift? There are still some lovely pledge options waiting to be claimed - including a number of original linocut prints!

Thank you for all your incredible work on this book Michael. I'm thrilled to be a supporter and eagerly await its publication.

Thank you Peter - and thank you for your support along the way. We did some test readings of segments of the book at our recent show in Hertfordshire and it certainly reads with some pace. Indeed, I have laid the text out to enable readers to enjoy reading it aloud to themselves too. I'm hoping that this, plus the notes and the illustration, will combine to make the book a pleasure to own, to refer back to, and to read!