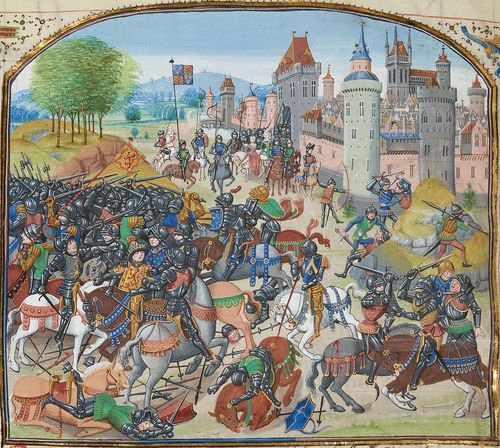 In King Arthur's Death, when the king besieges the city of Metz, we are given a detailed insight into the ways in which sieges were fought in this period. What this reveals, as do other elements of the poem, is that its anonymous fourteenth century writer had detailed knowledge of military matters. We are left tantalised as to who the poet really was, and to whom he was connected.

The options in siege warfare

Siege warfare in the mediaeval period was a brutal affair. Often, the choices facing a town or castle were stark: immediate surrender (thereby risking condemnation from one's own king and potential slaughter by the enemy) or holding out, waiting for relief to come (and risking immediate death and devastation should relief not arrive in time). Sometimes, when defenders stood in the way of a campaigining army, it was possible to buy off the attackers (as happened when King David of Scotland passed by Carlisle in 1346).

In King Arthur's Death, following the defeat of the Roman emperor Lucius, Arthur determines to defeat the Duke of Lorraine and besieges the city of Metz. The detail is fascinating; in one instance Arthur is shown circling the city to discover its weakest places. Outrageously, he chooses to do so in full sight of his enemies:

Yet the king shunned no shot,     no shield he sought,

But shows up all shining     in shimmering clothes,

Longs there at his leisure     and looks at the walls,

To seek the lowest place    where his lords could attack.

We are reminded here of the fate of Richard the Lionheart at Chalus in 1199 who, in contrast to Arthur, was picked off by the crossbow of one Bertrand de Gurdon, who was later flayed alive for his efforts. The poet chooses to position Arthur as king invincible; he is almost akin to Nelson at Trafalgar except he is not wounded. 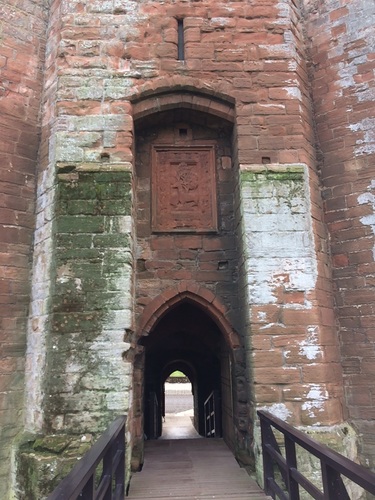 Conducting a siege was a complex process of testing defences and probing the enemy's willingness. In the early stages of the siege, King Arthur's forces skirmish in the suburbs and even venture into the city itself before deciding to withdraw lest their forces be split "in sondre". As the poet says, they

Break down their barricades     with their bright weapons,

Beat down a barbican     and win the bridge;

Had not the garrison     been good at the gates

Our men would have won it     by sheer strength alone!

Then our men withdraw     to dispose themselves better,

For dread that the drawbridge     should trap them inside

(the original Middle English of the above is attempted by me in the short film here, taken at Caerlaverock in Scotland, scene of a famous and well-document siege undertaken by Edward I in 1300):

The problems of siege warfare

But a siege was not always quick; preparing for a long term siege relies on substantial organisation. A particularly famous siege in this period, and one perhaps known by the anonymous Arthur-poet, is the siege of Calais, which lasted for 11 months between September 1346 and August 1347.

Just as Arthur constructs camps and builds siege engines, so at Calais Edward constructed a wooden "village" - a temporary town known as Villeneuve-la-Hardie around the church of St Peter's. Just as at Calais, where the besiegers ran short of food and needed to acquire reserves lest the army deserted, so too Arthur realises his own army needs guaranteed victualling (which leads to Gawain being sent to lead a foraging party whereby he meets with Sir Priamus). As Arthur says,

Our Frenchmen grow feeble,     me thinks no fair wonder!

These folk find life hard     in these fair marches;

They cannot find here     the food and flesh they prefer.

The problems with a lengthy siege included not only morale but also popular support. At Calais, Edward was able to maintain support at home and within his own army, despite some desertion when supplies ran low or illness struck. In the case of the defenders, supplies of food was critical. Edward's capture of the Rysbank, a narrow strip of land which guarded the entrance from the sea into the port of Calais was critical to his eventual success. The inability of the French king either to send supplies or raise a relief force signalled the doom of the defenders.

The outcomes of siege warfare 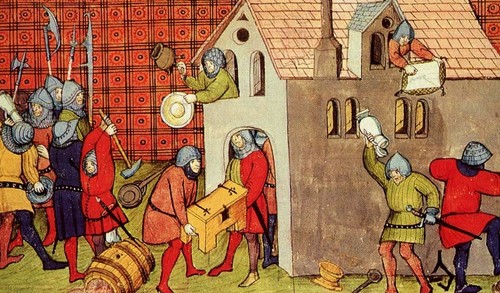 The siege of Calais is known for the harrowing treatment meted out on the defending forces. In particular, when things inside the town reached a critical point, those felt to be a drain on the defence were marched out of the town, where they in turn were left to fend for themselves between the English army and the closed gates of Calais.

Eventually, as is now well-known, the lives of the remaining defenders were to be spared by Edward III provided that 6 leading townsmen were surrendered to the king for him to punish as he wished. The Burghers of Calais, as they have been immortalised by Rodin, were eventually spared - reportedly upon the intervention of Edward's own wife, Queen Philippa. The fate of the goods and chattels of Calais was that of many such besieged towns and cities - fair game for the victor.

In King Arthur's Death, Arthur submits Metz to a massive bombardment which brings down houses, hospitals and churches in a destruction so savage that eventually the Duchess of Lorraine is compelled to surrender. Arthur grants the Duchess her freedom but her husband is subjected to a life of imprisonment in England, a fate which reminds us of that faced by Marshal Boucicaut who was to die in Yorkshire, six years after his capture at Agincourt in 1415. Indeed, had not circumstances changed, Charles, Duc d'Orleans would have suffered a similar fate; he eventually returned to France some 24 years after Agincourt.

The mystery of the poet

The descriptions of mediaeval siege warfare revealed in King Arthur's Death are simultaneously as astonishing as they are intriguing. The levels of detail as shown in this remarkable Yorkshire/Lincolnshire poem tell us that here we have someone who was signficantly familiar with methods and techniques of an army at war. We have seen this in his description of armour, of heraldry and of battle.

But who was he? Did he travel with the English kings during the Hundred Years War? Was he a senior cleric, a herald, a poet-mentor or even a member of the aristocracy? We shall probably never know the answer, but what he has left behind continues to tantalise and excite us in equal measure.

Be part of making this book happen! 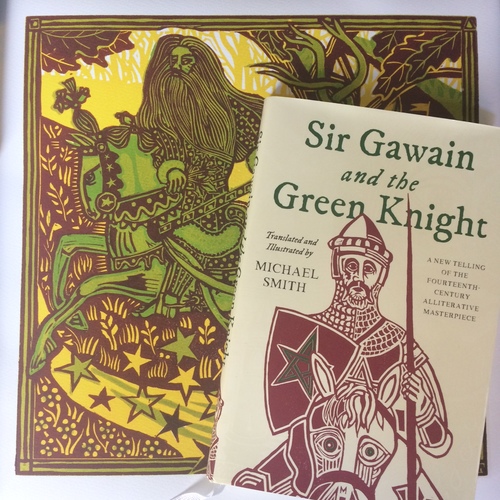 This update provides a tiny fragment of the insight and commentary I shall be providing in support of my new illustrated translation of King Arthur's Death. If you would like to support the book, there are a number of supporter rewards and all include having your name printed in the back of every copy as a supporter (in the manner of 18th Century books).

My focus with this (and my earlier translation of Sir Gawain and the Green Knight with Unbound), is to provide a modern translation with supportive contextual notes to bring the poem alive in its true historical context. In this case, I will provide background history, notes on mediaeval warfare and a detailed glossary.

If you have already pledged and would like to upgrade your pledge to include one of the many unique pledge rewards (cards, orginal prints etc) you can do so at any time.

Images in this post are from Wikipedia Commons, my own collection (Caerlaverock photograph) and via a page in the History Notes blog page.