Enter the Dark Side of Chivalry - Meet the other Sir Gawain. 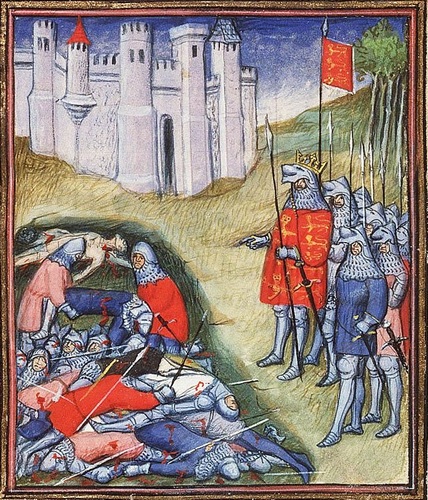 Battle plays a major part in the vivid writing of the fourteenth century masterpiece which is King Arthur’s Death (the Alliterative Morte Arthure; one of the key sources for Malory's Le Morte d'Arthur). Yet its anonymous poet chooses to tell us a tale not so much of chivalric romance but of the brutal horror of war. This is particularly true when we consider Sir Gawain, a leading character in the story.

Sir Gawain is one of the key figures in the Arthurian canon, identified as King Arthur’s nephew and with influence and renown far beyond the shores of Albion. He has a reputation as a brave knight but also, in Sir Gawain and the Green Knight, as a practitioner of the chivalric art of luf-talking. He is knight as refined gentleman. Almost the chivalric ideal…

But what makes a brave knight? In courtly romance, he is seen as a rescuer of maidens (a role undertaken, for example, by King Arthur himself when he attempts to rescue the Duchess of Brittany from the monster of Mont Saint Michel), a jouster, a person bound by rules of chivalric conduct.

These emblems of knightly honour were sufficient in the Middle Ages to lead to the creation of the chivalric Orders, in England, France and across Europe. In many ways these Orders became the physical embodiment of the characters so enlivened and embellished by Chretien de Troyes and further developed by writers such as Wolfram von Eschenbach.

Enter the Dark Side...

Yet in King Arthur’s Death, we see a darker side of the canon, where the knights, while notionally chivalric, are actually killers. In this magnificent poem, we are shown a side of warfare much more true to form: that all warfare, no matter how glamourous, is a debasement of humanity.

Thus, Sir Gawain in this poem is transformed into not so much a knight, but a ruffian in the king’s service able to act on a whim, despite the needs of diplomacy. For example, when he travels to negotiate with the Roman Emperor, he rashly kills Sir Gayous, the emperor’s uncle when he takes a dislike to his words:

Sir Gawain was most grieved     at these arrogant words

And goes to that knight     with a growling heart;

With his steely sword     he strikes off his head,

Then leaps on to his steed     and sets off with his men.

While the Gawain we met in Sir Gawain and the Green Knight was at times impetuous, he was nonetheless thoughtful and reflective. Not here; he is almost worn down by war, a depraved military servant and pirate. When they are chased from the Roman camp, a knight attacks Gawain, but…

Then Sir Gawain the good,     upon a grey steed,

Grips to him a great spear     and eagerly strikes him

Through the guts, to the gore      he gouges him such

That all the ground steel     glides straight to his heart!

The knight on his great horse     lies on the ground,

Full grisly and groaning     for grief at his wounds.

We notice the poet’s decorum in describing Gawain as “good”; we then note how this goodness metes itself out in the field. We are spared no detail: the blade penetrates intestines and offal and, still groaning, the knight bleeds to death.

There is a stark reality; in real mediaeval battle, nothing can be done to save a man wounded in this way. We do not grieve for him. The poet, in brevity, paints the matter-of-fact brutality which many of his readers will have seen for themselves. Post battle, bodies were stripped; many took hours to die a slow and agonising death.

War dressed up as Chivalry...

Yet all the while, the poet reminds us this is a work in the Arthurian canon; amidst the slaughter, the audience is still reminded of the poetic conceit by the inclusion of Gawain’s sword, Galuth, wielded by its most gracious master:

Sir Gawain the gracious,     how grandly he works;

He greets the greatest     with grisly wounds;

With Galuth, be brings down     the most gallant knights,

For grief of the great lord     he strikes so grimly…

King Arthur’s Death, while notionally an Arthurian romance, is more than what it seems. Although it draws from Geoffrey of Monmouth for its core plot, it seems to be doing something else: commenting on a society wearied by war. Arthur is a cover for a deeper commentary on contemporary events.

Like many poems of the Alliterative Revival of the fourteenth century, King Arthur’s Death offers us a fascinating insight into society beyond London at this time. Written largely (though not exclusively) in the north of England, as well as Scotland, and often in a blunter language than the more “refined” southern dialect, these poems appear to echo a voice perhaps ignored by those in charge.

The regal Gawain, the Knights of the Round Table, have somehow lost their charm to the poet. With its sumptuous vocabulary, northern brevity and rattling metre, King Arthur’s Death sings eloquently of a society grown tired of the vanity of its leaders and the consequence of rash decisions.

It is so much a poem for the Britain of today.

Thank you for supporting my forthcoming translation of King Arthur's Death, one of the great poems of the Alliterative Revival of the fourteenth century.

If you know of others who enjoy great literature and would like to be a patron of the book, please let them know – every supporter has their name in the back in recognition, not to mention receiving one of the de luxe, patron only limited first editions.(new pledgers, please see the pledge options listed on the right of this page)

In the meantime, please look out for future updates from me on this great poem. With every page I turn, new vistas open. I hope to bring forth all this excitement in my final work – with illustrations specially drawn to capture the drama and suspense.

​(PS - all words in this quotations, are from my translation of the Middle English poem and are representative of what pledgers will receive in the final edition when it is published. The caesura in the middle of each line reflects the metre of the poems of the Allitrative Revival, a metre extending back to Beowulf and beyond; for maximum enjoyment of this poem it well repays reading alound!)