Dragons and Dreams – the Uncertainty of Mediaeval Kings 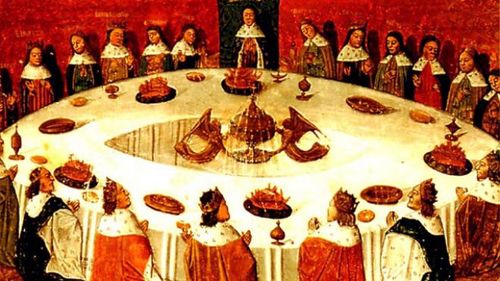 When kings in the past were faced with aggression from abroad, how did they react – and why? In the Alliterative Morte Arthure (King Arthur’s Death) we are given significant insights into the diplomacy and thinking of mediaeval kings. It makes for gripping reading, far beyond what we might expect from such a poem.

Mediaeval life was dominated by religion, war and the whim of God. If calamity was to be avoided, the Almighty must be placated yet, in a feudal society organised for war, there was a stark contrast between religious devotion and royal prerogative. But no king, no matter how strong, could afford to rouse the wrath of God.

In King Arthur’s Death, Arthur is confronted with demands from Rome which he finds unacceptable. Despite his initial fury at the demands made upon him by the Roman messenger, Arthur knows that he must react in a considered way. As he says (lines 144-149):

But I shall take counsel    from my kings anointed,

From my dukes and top lords    and well-read theologians,

From the peers of my parliament,    from prelates and others,

And the most regal ranks    of the Round Table;

Then I shall take advice    of valiant nobles,

Why does he do this? Mediaeval warfare was predicated on the importance of justifiable war, defined in particular by Saint Thomas Aquinas in the thirteenth century. What we might call the Just War depended on three key factors, somewhat simplified here:

With this in mind, we learn in the opening verses of King Arthur’s Death not only of his need to take advice but also we hear some of the advice given, including Arthur’s response. For example, when Sir Cador of Cornwall celebrates the potential of war as being the answer to national decadence (as highlighted in my film for the book), Arthur replies (lines 259-264):

And, man, you’re magnificent     with your merry words!”

Yet you heed not the context     nor consider the consequence,

And let your hot head speak     as so ruled by your heart!

So I treat you to stay calm     touching what you say

And first talk through these tidings     which torment my mind..."

The purpose of this passage is two-fold; it shows that a king must take measured advice under Aquinas’ doctrine; it also shows that Arthur is a good king in reflecting on advice rather than be subjected to rash decisions. It is crucial that the king's decision is seen as rational and just in the mind of the reader.

Here, we might reflect upon the arcane and exquisitely crafted claims made against France by Edward III in the 1340s or even those made in the same cause 70 years later by Henry V, himself somewhat tarnished by the perceived sins of his father in the usurpation of Richard II.

Such kingly torment was not unusual; we see this in detail in Arthur’s first dream when sailing across the channel at the beginning of his campaign. Here a dragon – or “schrympe” of the west battles with (and subsequently defeats) a fierce bear of the east.

Arthur is immensely troubled by this and, reflecting on Aquinas perhaps, he seeks the advice of philosophers. These, we are told, are scholars educated in the "seven sciences", the mediaeval liberal arts of grammar, logic, rhetoric (the Trivium) and arithmetic, astronomy, geometry and music (the Quadrivium).

Again we are shown that kingship demands consideration. With their measured thinking the philisophers are able to reassure him that the dragon represents the king and the bear is the Roman emperor, and that all will be well (lines 819-821):

… Of this dreadful dream     have no more dread,

And be not concerned, king,     but comfort yourself

And they that sail on the sea     with your trusty knights.

In the Middle Ages, the weight of war weighed heavily on the shoulders of kings, as did the lives of those under their command. In these delicately observed moments, we are made to realise that King Arthur’s Death, the Alliterative Morte Arthure, is touching more of a vein than we might imagine.

In today’s troubled times we can be sure that the dreams and self-doubt that gripped King Arthur are but a second away when night draws in for our leaders in the field.

It is a strong person indeed who can cope with the loneliness of command.

Thank you everyone for supporting my forthcoming translation of King Arthur's Death, one of the great poems of the Alliterative Revival of the fourteenth century. It's a fascinating work and, at twice the length of my translation of Sir Gawain and the Green Knight, is a signficant undertaking. If you know of others who would be interested in pledging support to help this book become reality, please do pass on this update to them - I would be eternally grateful.

In the meantime, please look out for future updates from me on this great poem. There is much more to it than meets the eye, believe me!