My new translation of the Alliterative Morte Arthure (King Arthur’s Death) begins a new journey for me: translating a vibrant poem of the late fourteenth century (which, incidentally, has a number of hidden meanings) and illustrating it in pen-and-ink. For this post, I want to show you the process I use in my illustrative work, focusing on an illustration of King Arthur himself. 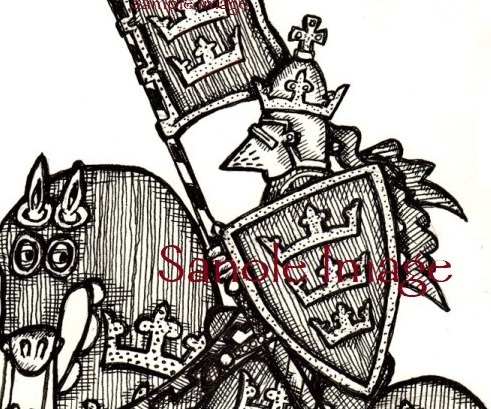 ​Of course, the myths and legends of King Arthur stretch way back into distant times but crucially in the case of my work, the Alliterative Morte Arthure was written at the very end of the fourteenth century (although the surviving manuscript in Lincoln dates from the mid-fifteenth century).

This is a favourite period of mine, so my illustrations are based on illuminated manuscripts from that time.

As with my translation of Sir Gawain, my approach is to “borrow” figures from different illuminated manuscripts and then combine them with others, in scenes appropriate to the story.

In producing the image of Arthur, I borrowed from a number of different sources. Arthur's heraldry - the three crowns - is taken from a grafitti drawing/doodle in the orginal Lincoln manuscript which was added some time in the fifteenth century.

Each illustration is produced in the same way as follows: 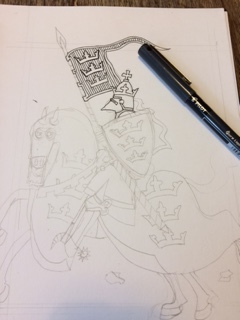 This initial stage is in pencil to create the composition and to test for fit on the page. 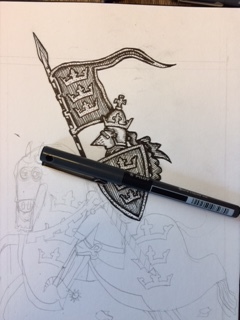 Now we can see the banner taking shape and detail being completed on the king's bascinet and shield. 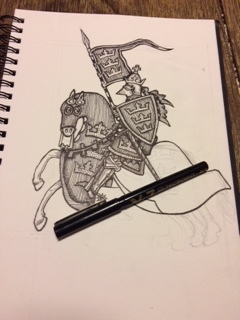 Here, I've moved on to the horse, having completed Arthur's body and armour; I am just about to work on the rear caparison of the horse. 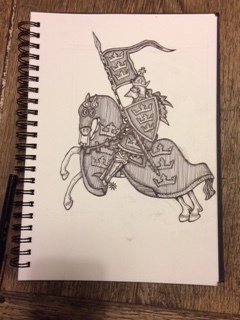 Now the horse and rider are complete and ready for the illustrative framework and the notional ground on which the king is riding. 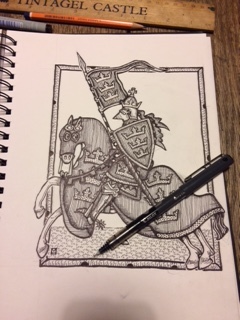 Pledge for your copy of King Arthur's Death!

​This book cannot exist without the support of individual patrons who can pledge support at different reward levels; every supporter has their name printed in the back for all time as a supporter.

When the book is published, each supporter (pledging at  hardback level and above) receives a limited edition version of the book which is completely different to the version sold later in bookshops (it will include special paper, spot-varnished dust jacket, decorated end-papers, silk bookmark and much more).

There are lots of different pledge options and rewards available. The print shown in this article is just one of the pledge reward options (King Arthur Print, printed using archival quality, Fine Art Trade Guild approved printers, inks and papers to last for more than 100 years.) but there are many others to choose from. Whichever option you choose, I will be honoured by your support.

PS I cannot show you at this stage what the final version of King Arthur's Death will look like but I have no doubt it will be as handsome as my translation of Gawain, for which Unbound did a tremendous job (see image below).