As well as being an historian, I am also a printmaker. The combination of both these areas comes to play in my forthcoming translation of King Arthur's Death (as indeed it did in my translation of Sir Gawain and the Green Knight, also via Unbound, published July 2018), for which I am producing at least 32 linocut prints. In this brief update, I provide a short film showing how I print the linocut blocks.

In the film above (please click the arrow on the image), I am printing off one of the illustrations; in this case, a complex print featuring the Siege of Metz undertaken by a vengeful King Arthur in the second half of this magnificent alliterative poem. In this instance, I have drawn inspiration from mediaeval illuminated manuscripts of sieges and then used my knowledge of 14th century arms and armour to adjust each of the figures to reflect armour used at the time the poem was written (some time around 1390-1415). 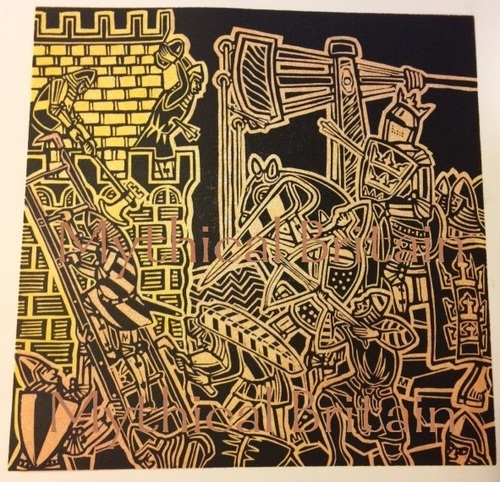 The print in question, at least the black and white part of it, took around 12 hours to prepare, cut and finesse prior to printing itself. It features King Arthur himself (on his horse) as well as different kinds of beseiging warrior (sappers, crossbowmen, shield bearers etc). The Trebuchet, a  form of mediaeval siege weapon for slinging rocks and, sometimes, rotten corpses and other horrors, dominates the background while, if you look carefully, you will see a sapper using his pick to mine the walls and, elsewhere, see a "sow" or covered shelter beneath which miners could work without being showered with rocks.

News Flash! This actual print, of which only one exists (due to complexities with the colour masking), is also now available as a pledge option for one lucky pledger. Scroll down the pledge options accompanyin this article - the one you see in the film could be yours!

As many of my followers will know, I use a nineteenth century Albion Press (the type shown in the film). This is my preferred press as, with experience, it gives you a great "feel" for what is happening with the block and the paper. Often you know just by the way the press behaves whether a print will be succesful or not. There is no greater feeling than when press, ink and the action of printmaker all come together in harmony!

I am honoured by the all the support I am receiving for my work, and the many comments on Twitter and elsewhere. If you know of others who would like to support my illustrated translation of this magnificent fourteenth century alliterative poem, please do spread the word.

Also, please note the new pledge option uploaded today (which you can upgrade your pledge to if you wish) - 8 lucky pledgers can have a hand-printed mediaeval initial letter which I will cut and print specially for them! Depending on the letter chosen (Unbound will contact you nearer publication date), the letter may also appear in the book as one of the illuminated letters (in the same way as in my work on Gawain). 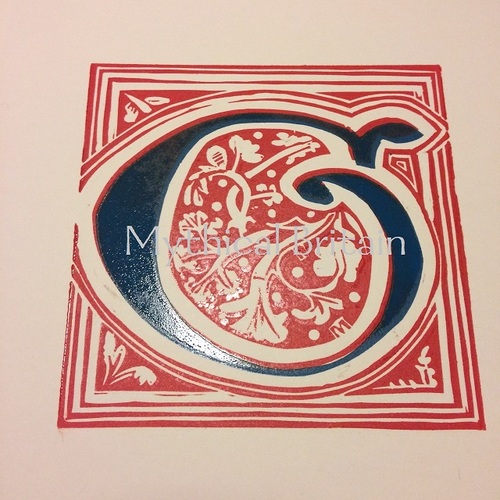 Thank you everyone for all your support.

I am grateful to Sue Jones of the Stoneman Press, whose facilities I use and has taught me all I know about printmaking (which is a mere fraction of what she knows, I have to say!). Sue is a great friend and runs a number of different printmaking courses - you can check out her website here.

The film itself was taken by another of my fellow printmakers, and good friend Anna Pye. Anna produces delightful and extremely successful prints of her own and details are here.