A brand new biography of the legendary broadcaster, Huw Wheldon

On the occasion of England's humiliating exit from the World Cup, I offer this extract from Dad's Dimbleby Lecture, delivered live to air in January 1976.  It concerns the very invention of one-day cricket.

"There are in the BBC, as there are in the IBA, advisory committees and advisory councils on every conceivable subject; and they include a Central Religious Advisory Council, known - I am sorry to say - as CRAC.  I was Controller of programmes at the time and I was asked to attend CRAC to see whether they would agree to cricket extending into the period on a Sunday reserved for religious programmes on the new network [BBC2].  I had never been to a meeting of that particular council before.  I expected everything to be full of sweetness and light.  As a matter of fact, as usual with councils, it was full of earnest human endeavour: that is to say there were people from one branch of Christianity trying to do down people from another bramch of Christianity.  Everyone was anxious that the truth should prevail.  I listened to all this with the utmost enjoyment.  they agreed on nothing.

In due course I was able to put my problem before thm.  I had been well briefed by the Head of Sport.  I explained to them that it was largely an academic matter.  Most games would, of course, already be won or lost by six o'clock.  And those that had not been won or lost by then, statistics showed, would have been rained off.  What with one thing and another, they need not be too bothered.

I got the impression that I wasn't doing too well.  They were long-headed men; they listened courteously but not in an accomodating fashion.  Someone asked me who were these teams; I said one of the teams would be a county side = Kent, Lancashire, Sussex, and so on.  And the other is called the International Cavaliers.  Oh, they said, who plays for them?  Why old sweats I saud, Sobers, Bedser. ('Bedeer?' they murmured.) Edrich. ('Edrich!' They murmured further.) Godfrey Evans, Compton.  By the time I'd named six or seven of the players, I might have been talking about the Twelve Apostles.  they were entirely happy that this particular minority programme series should at once be started.  It was the only thing they agreed upon during the entire afternoon.  I got the impression they rather welcomed the thing as an ecumenical project." 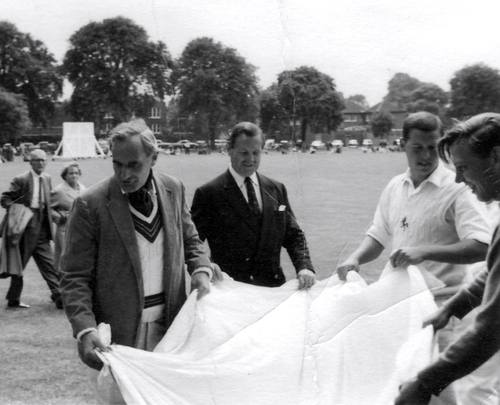 Sorry to reproduce this photo again, but it is the only Dad & Crciket picture I have.  Dad, Tom S;oan, Jack Hampshire and David Attenborough folding up something or other following a celebrity cricket atch on Kew Green.  I remember Dad being told off for lying down at fine leg (or was it long on?)