A brand new biography of the legendary broadcaster, Huw Wheldon 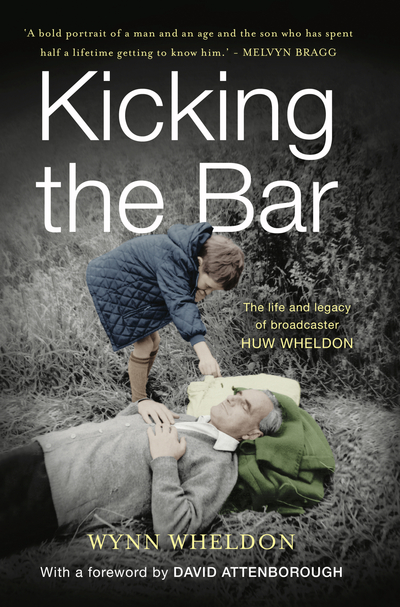 Biography
You made Kicking The Bar a reality. It's available in all good book stores now.
$8
38 pledges

Two copies of the 1st edition hardback and the ebook.

WITH A FOREWORD BY SIR DAVID ATTENBOROUGH

“Huw Wheldon was a most remarkable man, and his son Wynn has written a remarkable book about him in the great tradition of books by sons about their fathers. Huw’s impact at the BBC and the Arts in the country in the 20th Century was immense. He was a brilliant man, serious and funny at the same time, and able to interview on television some of the greatest artists of the 20th century. This is a bold portrait of a man and an age and the son who has spent half a lifetime getting to know him.” Melvyn Bragg

“I don’t think I have ever known anyone who gave so much pleasure and reassurance, marvelous feeling, to his friends.” Kingsley Amis on Huw

Huw Wheldon was one of the most important and influential media figures of the last century. He ran BBC television from 1968 to 1976, a period described by many as the Golden Age of television, with programmes such as Civilization, Alistair Cooke’s America and The Ascent of Man, Steptoe and Son, Till Death Us Do Part and Dad’s Army. He was an extremely visible and articulate evangelist for the BBC as “one of the major institutions of the Western world”. As a highly regarded presenter, his interviews with figures such as Orson Welles, Alfred Hitchcock and Robert Graves have been recognized as exemplary.

Kicking The Bar is a portrait, not a history. It begins in 19th century Wales, examining Wheldon’s forebears, specifically his father, mother and grandfather, describing the strong protestant ethic that would inform his career.

The book examines Wheldon’s childhood, grammar school education and time at the London School of Economics, before tackling his service and experience in the Second World War.

Using Wheldon’s war letters the book uncovers the major influence his experiences during the war played in the development of his personality. He landed by glider in Normandy and was awarded the Military Cross on D-Day, his first day of combat. He was wounded at the crossing of the Rhine and passed through Belsen days after its liberation. The book traces Wheldon's work from his time with the Arts Council, working on the Festival of Britain, until he joined the BBC.

At that stage BBC Television was still living in the shadow of BBC Radio, but society was changing and a new generation of television makers was seeing the opportunities of this extraordinary new medium. Wheldon was their champion.

Wheldon, initially a Press Officer, was keen to make programmes. He presented the children’s talent show All Your Own. Ground-breaking programmes such as Men in Battle (with General Sir Brian Horrocks), Orson Welles’ Sketchbook and Portraits of Power (with Bob McKenzie) followed. It is, however, the arts magazine programme Monitor, in which he gathered around him a team of all the talents, including John Schlesinger, Ken Russell and Melvyn Bragg, that has fixed his reputation.

The 1960s, in broadcasting, as in the culture as a whole, saw tumultuous change. The author was a child, the father was overseeing the liberalisation of BBC Television, burying Auntie.

“Monitor was and still remains the one and only experimental film school and Huw Wheldon was its presiding genius.” Ken Russell

1st edition hardback and the ebook edition
View all 3 rewards