Keanu Reeves Is Not In Love With You

My Encounters With Online Romance Scammers

'Keanu Reeves is Not in Love With You' follows my journey through the world of online romance fraud. So yes there are my tweets, yes there are stories from victims, yes there are conversations with scammers, yes there are interviews with fraud experts, but there are also times when I go off on a tangent about something that has happened to me along the way. Here is an excerpt from what I have written this morning.

Eve invited me to stay with her for a couple of days so, like Nellie the elephant, I packed my trunk and headed off. Not to the circus but to Suffolk.

When I arrived I bent down to get the bottle of prosecco (I know, so posh) I’d brought with me out of my bag and felt a sinister presence. I slowly and nervously looked up to find the most enormous Maine Coon cat staring at me at eye level. Having never come across a Maine Coon before I was unaware that they are the size of a small bear. The terrifying bear advanced and pushed me out of the way for absolutely no reason - there was plenty of room to walk past me nicely!

This was the first of many encounters with Norris. On the afternoon that I arrived Eve and I decided to brush him, and believe me when I say that Norris was not happy with this turn of events. To cut a long story short he ended up remaining unbrushed and won the battle.

From that point on Norris implemented a systematic campaign of persecution against me. He insisted on opening the door to my bedroom and sleeping either on or in my possessions, sarcastically leaving a trail of black hair on whatever I had brought with me - including my can of deodorant, which I thought must have taken a considerable amount of determination and skill to achieve. He also coughed up a hairball onto my pyjamas.

The first night that I spent at Eve’s I woke up for my regular 4am wee, blearily eyed looked around the room and nearly jumped out of my fucking skin when next to the bed was a sinister black shape the height of a small adult. I did what I normally do when confronted with something terrifying and completely froze (how come in films people always manage to immediately scream for help?) As my eyes adjusted to the blackness I saw that, in fact, it was not the ghost of a murdered Victorian house boy hell bent on violent revenge against the living, but bloody Norris having a massive stretch against the wall.

The next day we set ourselves up in Eve’s living room so we could talk about her experience with romance fraud. I had my dictaphone, notepad, pen and a coffee. Perfect. Until Norris appeared… Leaping onto the back of the chair he startled me so successfully that I spilt freshly made, i.e. boiling bloody hot, coffee down my front. Having cleaned scalding brown liquid off my clothes and wiped down the chair we were ready to start. I was aware of Norris glaring at me but I ignored him and let my guard down. This was a foolish move as he sensed my weakness and leapt, panther-like, at my notebook while I was writing in it, savaging the corner. The furry prick.

hehe I am sorry but I love Norris :) He sounds ace

Just imagine - the book funds, I get a move on and finish writing it, your copy arrives in the post, you open the front cover and… gasp… I’ve scrawled with a black marker pen on the inside! What could possibly be better than that? Actually there are a lot of things much better than that but for heaven’s sake work with me here. Anyway, for this pledge you’ll get a signed, first-edition paperback copy of the book, the ebook and your name in the back of the book among the list of patrons.

The first thing I do in the morning is have a coffee from my Mentally Dating Greg Davies mug (yes I do own that). The only thing I can think of that would be better than that is drinking my coffee from a mug that reminds me that one of the sexiest and apparently loveliest men in Hollywood doesn’t love me. Oh no, wait. That’s a horrible thought. Oh well, buy one anyway. Those of you with ladies in your life could always buy one for her to remind her that she may as well stay with you as she’s never going to get Keanu.

You’ll receive the mug plus a signed, first-edition paperback copy of the book, the ebook, and your name in the back among the list of patrons. 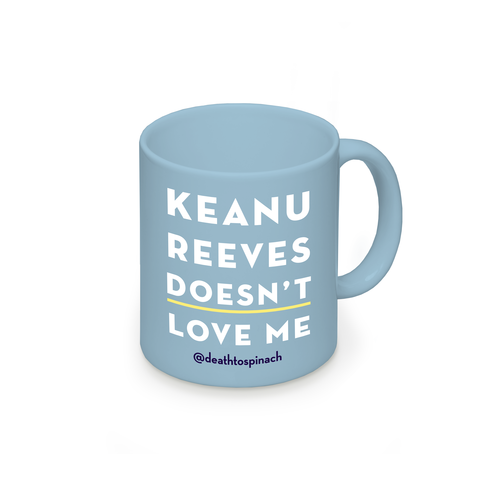