Time for the edit!

It's been a long while since my last update, apologies for that. Life here in Madagascar has been very hectic: I spent June and July traveling around Angola for the first time in two years and have then been buried in work since returning to my home in Antananarivo on 5 August.

I understand that everyone received an email last week explaining that we had started the developmental edit. What this means is that Unbound sent my book manuscript off to an editor, who wrote a load of notes all over it with suggested edits. Some of them were small changes, others were quite large. I now have 300 pages of comments in Microsoft Word to go through and address (see image below). Once I have done that, my work is done and I hand it back to Unbound to bring to print. My hope is to have this editing done by the end of October. I will then be able to send you a more accurate update on when you will get your copy.

Thanks again for all the support! 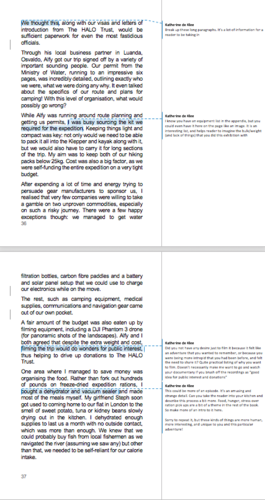