Just Where You Left It . . . and Other Poems

How to Survive School, Parents and Everything Else That’s Unfair in Life

The poetry recital poem that started it all off...

Hi and thank you again to those of you who have pledged to help make this book happen and get your copy. If you are interested in finding out more and pledging to get involved with have your name in the back of a limited hardback edition then find out more here. We're currently at 73% and have raised over £7,000 with around £2,300 to go. Given that we are over 2/3rds of the way there, I thought that I would release another extract. Ths time it's the poem that kicked the whole thing off - the one that I wrote for my eldest son when he asked me which poem he should do for the school poetry competition. 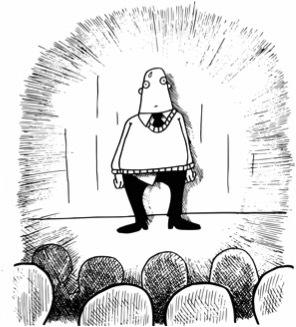 My palms are sweaty, my mouth is dry.

There is the stage. I ask myself why

Do I have to do this? It's not fair

To force scared boys to read up there.

Up all alone, when it's your turn.

No text to read, they make you learn.

The first boy up is a nervous wreck,

Just stood there on the burning deck.

It's all too much and the room starts to spin.

The next boy comes on. Will he be all right?

'That's much more like it' the audience is thinking.

The poor boy spots that his Father is winking.

His Mum starts smiling and nudges his brother.

'I did this at school' says the amnesiac mother.

'In fact I'm sure that I won first prize'.

The next one's modern and nobody knows it.

They can't comprehend but nobody shows it.

They prefer the ones they learnt as a child:

The old ones really are the best.

There's parents and teachers and sisters and brothers.

The judge seems quite nice but then so did the others.

And they didn't seem to be condescending;

They liked your beginning but preferred your ending.

(I'm desperate for the loo-oo-oo).

I can't even remember the poem or poet.

I can't even start - my mind is just hollow.

Was it Kipling (Rudyard) or Byron (George Gordon)?

"I must go down to the seas again, to the lonely sea and the sky"?

Or anywhere that is not here to just curl up and die.

"In Xanadu did Kubla Khan a stately pleasure-dome decree"?

I'd rather be there than standing here or be anyone other than me.

I'd take being a cat, a spayed one at that, anywhere but in this hall.

"The curfew tolls the knell of parting day,

I can' t believe that I don't know line three…

I struggle on and get through somehow,

My parents grin and stick thumbs in the air.

Do they know nothing or do they not care?

The judge will know and will give me worse.

'Nul points' is not a score for verse.

He says the standard was quite high.

"Horatio At the Bridge" he rated second.

The judge thought not and chose a child

Who delivered with style his Oscar Wilde.

It's all over. Home seems not far.

The parents chat and won't come to the car.

"I thought you were great" my friend's mum utters,

My Dad just says he preferred the stutters.

He also thinks I deserved a prize.

So just twelve months 'til we go again.

The stage will be set for mice and men.

I do believe I'll get it right,

"I must try harder" 's what I'll recite.

I'll work so much - I'll even rehearse

To ensure I change from bad to verse.