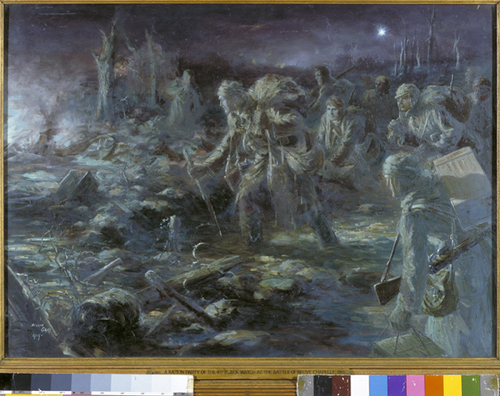 'A Ration Party of the 4th Black Watch at the Battle of Neuve Chapelle, 1915'
Collection: Imperial War Museum

Thank you, all of you, for pledging so far. I am already 80% funded, which is is amazing. Please do keep sharing the link with anyone who might be interested. To anyone who knows me, please think of this as a fantastic opportunity: if I am fully funded, I may finally stop talking about camouflage!

When I first set out to write Joe’s story it all seemed perfectly simple. I just wanted to pin him down, straighten the facts, locate all the pictures and make a proper list of works. But it became something else, something more, very quickly.

Where did it start? Probably in a basement – a museum store to be exact – and probably with one painting. The Ration Party. It’s a strange picture, it's actually quite ghoullish, and the reproduction I have doesn’t do it justice. It shows the night after a battle: a group of bedraggled mud-soaked soldiers, struggling back in the darkness through No Man's Land.

I remember very clearly the first time I saw this painting. I remember leaning forward, focusing on the angry choppy brushwork, tracing the ragged outlines of each soldier, their dirty bandaged faces and the shadows they were lost in. These were the men of the Fourth Black Watch as my great grandfather saw them, and he was there. He was one of them.

How do I know?

Because it turns out he made his own lists.

The Ration Party was commissioned by the Imperial War Museum in 1919. Joe had already sold them a series of sketches but Martin Conway, the director, wanted something bigger.

Like all Joe’s war works The Ration Party is based on a real event, this incident following the Battle of Neuve Chapelle.

‘On the night of the 11 March the artist was one of a party that left the trenches to bring up rations. The night was wet and stormy and the dark ground was flooded. The only light was provided by bursting starshells. The picture shows the return of the ration party. A star shell has dropped near to the men – their position, now exposed, is swept by machine gun fire and they make a wild dash forwards towards cover.’

The disheveled soldiers crouch low and rush forward, but they can’t escape the blinding light that picks out every outline. It's interesting that what makes a perfect picture also puts them in the most danger. As I said, they were real soldiers:  ‘C.S. McCririck, G. Edwards, D. Kinnoch, W. Adams, Joseph Gray, C. Shepperd, A. Murray, H. Fraser, D. Chapman.’ And Joe didn't just name his subjects: he also liked to make a skeleton diagram so you can check the name and find the likeness in the finished composition, a bit of show and tell. When I check a few likenesses against photographs I'm impressed. But Joe is ‘number 5’, which sadly means very little. He is the tiny figure in the distant right, a face hooded and hidden in the shadows, almost a shadow himself.

So I have found him but can't recognise him; and it leaves me frustrated, even annoyed.

Then, a short while after this, my aunt went on a tour of the First World War battlefields and memorials in France. As she was shown around a workshop where they were making headstones, she explained to the guide that her grandfather had been at Neuve Chapelle.

‘No,’ she replied. ‘You don’t understand. He survived.’

The guide looked up, genuinely shocked. ‘Oh! Well, he was one of the very few...’

‘It is amazing,’ she said to me later on. 'I wonder how anyone survived...'

I think again of the shadowy figure in The Ration Party, the man who's so well hidden.

To see without being seen might just be its own art form.