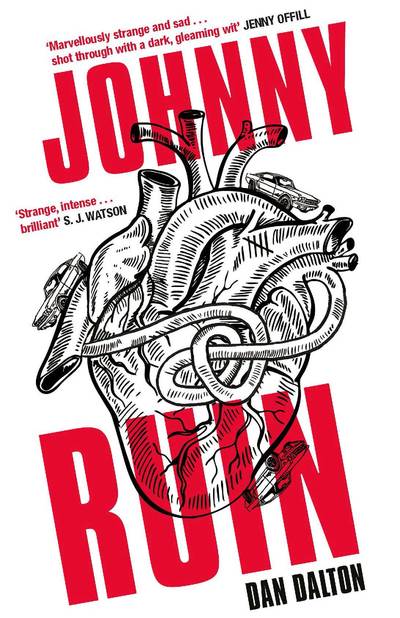 Fiction
You made Johnny Ruin a reality. It's available in all good book stores now.
$8
86 pledges

A first edition hardback, plus a pack of three postcards feat. Johnny Ruin inspired art by Dan Dalton and Finchfight plus ebook edition, and your name in the back of the book
Only 25 available 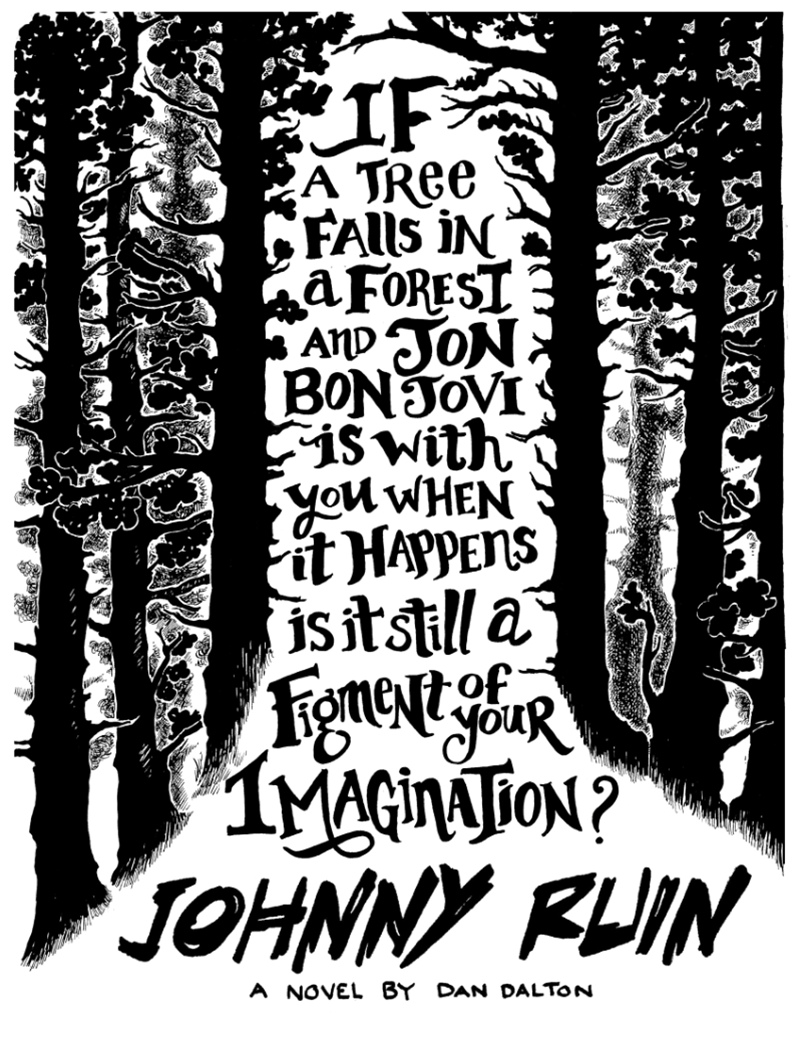 A signed first edition hardback, ebook edition, and your name in the back of the book
Only 25 available
$60  + shipping
15 pledges

For fans of Dan's weekly mix tape newsletter, Dan will create a bespoke Spotify playlist for you based on your favourite songs, plus a signed first edition hardback, and ebook edition
Only 10 available
$90  + shipping
9 pledges 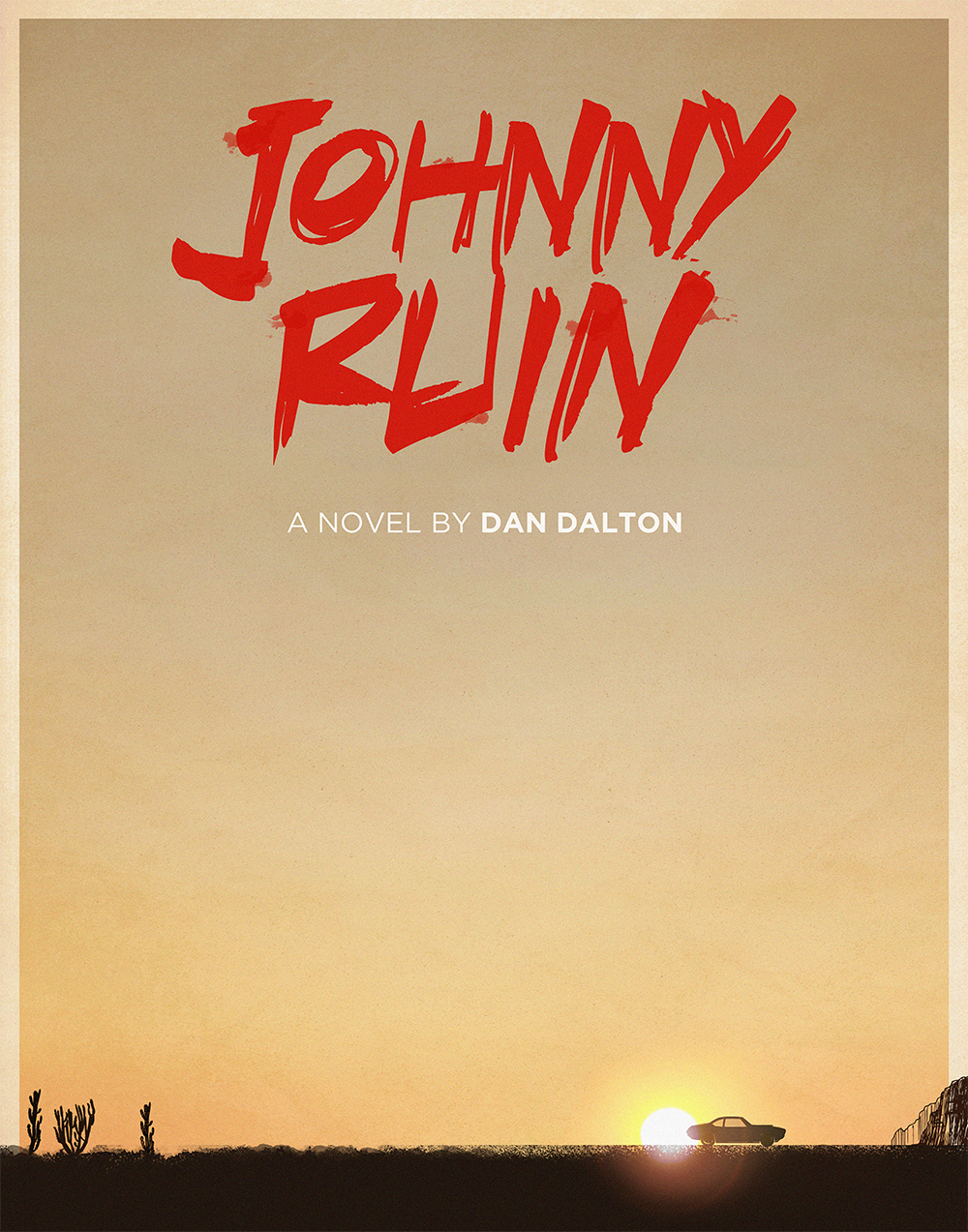 An art print and a bespoke Spotify playlist plus a first edition signed hardback, and ebook edition
Only 10 available
$190  + shipping
3 pledges

Two tickets to the launch party plus a first edition hardback, and ebook edition
Only 10 available
$265  + shipping
2 pledges

A ticket to the launch party, then join Dan and co for karaoke afterwards (there will be Bon Jovi songs aplenty). Plus a first edition hardback, and ebook edition
Numbers limited
$525  + shipping
1 pledge

Author and Head of the Fiction Programme at Faber Academy Richard Skinner Richard Skinner will edit your manuscript (up to 10,000 words) Plus a first edition hardback, ebook edition
Only one available
$4,500  + shipping

Your name printed in the front of every book thanking you for your contribution, plus a first edition hardback, ebook edition, and your name in the back of the book
Only one available

"If a tree falls in a forest and Jon Bon Jovi is with you when it happens, is it still a figment of your imagination?"

Johnny Ruin is a literary novel that explores themes of heartbreak and mental health. The novel is set in the mind of the narrator, a surreal United States where each state is a new state of mind: lust; anger, jealousy.

Haunted by the idea that he is somehow broken, the narrator, a depressed 30-something writer, embarks on a trip through his own mind with his spirit guide, Jon Bon Jovi, for company. As they explore his memories, fantasies, and imagination, we learn he attempted suicide after a recent heartbreak.

From the redwoods of California to a crumbling New York City, the road trip travels the highways of the narrator’s memory, an ever shifting landscape where fact and fiction rewrite each other. When his ex-girlfriend turns up demanding she be allowed to leave his mind, he has to decide whether to fix himself, or engineer an escape for the one memory he’s clinging to.


Wait, who are you again?

I’m a writer and journalist, originally from Yorkshire and currently living in London. I have a BA in Creative Writing from the University of Leeds and I’ve spent the past three years working at BuzzFeed, writing about mental health, books, and pop culture.

Why did you write this book?

I had the idea for Johnny Ruin way back in 2005. I was living in LA. and had an idea for a man on a quest to fix himself by taking a road trip back east. At some point the road trip became a trip through his own mind. Then I added Jon Bon Jovi, and everything fell into place. I finally sat down to write it in August 2015, and here we are. Books take a long time!

If the book is any good, why not just publish it?

Unbound are a new kind of publisher, who believe readers should have a say in what books are published. By contracting the book in the first place, Unbound have shown they believe in it. The crowd funding campaign gives readers a chance to vote with their money for a book they believe in. So pledge away!

What do you need the money for?

The campaign covers the costs of producing the book: Editing, designing, printing, publicity, distribution, etc. The money isn’t pocketed by me, and since the novel is already written, there’s no chance it won’t be delivered!

What do I get in return?

1. A copy of the book, in either digital or print, depending on the pledge level. 2. Your name the back of said book, thanking you for your patronage. 3. A super cool reward, depending on your pledge level – check out the list of levels on the right of the page. 4. The warm, fluffy knowledge that you are helping support an emerging writing career!

Jon and his music were very formative for me. Bon Jovi were the first band I loved, and Jon was my childhood idol. I’ve seen the band play 8 times on three continents – it’s safe to say I’m a fan! When it came to writing the book, I realised I needed a spirit guide, a Virgil to the narrator’s Dante, someone who would help him find himself again. I immediately thought of Jon.

Of course, I’ve never met Jon, and the character in the book isn’t meant to represent him. He’s a figment of the narrator’s mind, drawn from an early 90s album cover. It’s a sympathetic, heroic portrayal, but it’s entirely fiction.

When will I get the book?

We’re aiming to deliver the book in Spring 2018. Good things come to those who wait!

Read the pledge levels on the right, find the one you want, and hit the green pledge button! Thank you for your support!