That was my faltering, (twittering) voice the day he died. Usually, when someone you don’t actually know, but admire (greatly), leaves for good, that unfamiliar weird, empty feeling ‘gets better’, i. e. diminishes, as the days go on. But it’s ten days now and that feeling is getting emptier. Did David have (much) more of an effect on me than I imagined? Are those songs and that voice much more in my blood and guts than I thought? Must be, ‘cos things ain’t getting any ‘better’.

Due to the event coinciding date-wise with my crowdfunding ‘The Story of John Nightly’, people ask if the novel is influenced by either the man, or his work. The answer is no. I didn’t want any overpowering presence coming into disrupt my 1000 pages. In that respect, David would be ‘too present’. If you put him - even surreptitiously - into anything, he’s gonna mess it up for you.

My thoughts about him are ‘deep', but at the same time short and sweet. From that first (dissonant) chord of ‘Space Oddity' on the school canteen radio to the shocking early morning news in the deadest of months, it was respect, fascination or maybe just ‘wonder’ I felt more than anything else. ‘Space Oddity’s’ orchestral strum lifted my fatso arse right off the suburban settee and into an other-worldly atmos which inspired my cul-de-sac existence. ‘Soul Love’ was the next talisman. ‘Drive in Saturday’, first experienced in the listening booths in Millers Music in Cambridge, the next. Then there were loads of magikal charms, landmark story-songs and productions (depending in which order you bought the cut-outs…).

Ziggy at Norwich Regal, was just that - ‘regal’. A much noisier racket than my ears had registered thus far. There were several further live sightings, but by then I was a practitioner myself so of course pre-occupied with my own delusions. The later records, more ‘limousines of sound’ than mere songs, seemed to be designed for a collective or communal audience. I didn’t relate to them quite so much. For me, it was the intimacy of the actor whispering to me, in a sense, consoling me (in music), which will linger on.

Poor David. Everyone is ‘on’ him now. They always will be. It won’t fade. It won’t rot. There is no smooth fader movement and as ever, the media pundits get it wrong - wasting their time 'listening to the image’. He was no ‘rock star’ (BBC inadequacy) or ‘Picasso of Pop’ (uh...BBC again…) or ‘pop genius’ (Mr Cameron - oh...).

He was something else. Really was… 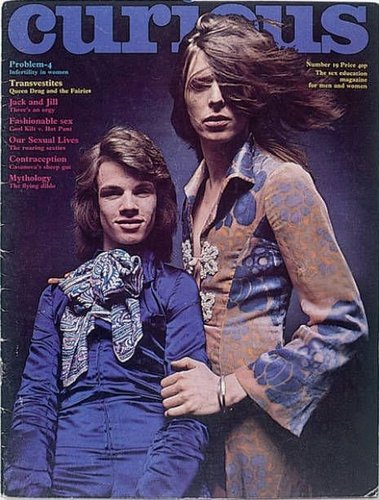 Get ahead in the neck department with this chocolate and pink bespoke saxony wool scarf from Ryder & Amies - scarfmakers to the some of the best brains in Cambridge, England - as worn by John Nightly circa 1968. Includes the ebook edition.