Design sample and other book news

Hi all! Sorry for the radio silence since this project completed, but honestly, there hasn't been a whole lot to update, as the text has been completed as of the summer and the design and editing process has begun. The tentative release date is October 3, 2019, though all backers should get their copies about a month before hand.

I've attached one of the design samples as an early preview - please note that this is definitely not final, as I've already suggested changing the color scheme, but should give a rough idea of how it will look when it's completed. I also requested that some larger versions of the cover art be used, especially for the games that I bought and scanned myself. 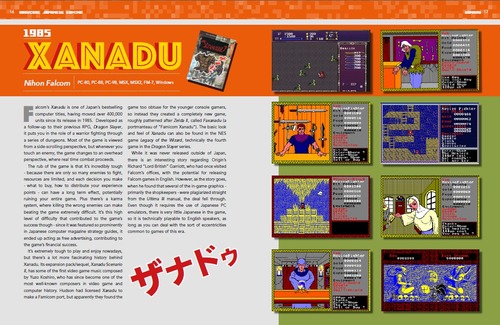 When the book was still crowdfunding, I'd also started up a "Japanese Video Game Obscurity" column to provide some samples and help promote the project. Since then, I've kept the column going on an irregular basis, with a few more entries on weird and unknown games, mostly PC titles at this point. I'd set a Patreon goal that if the pledges reaches $2,250 monthly, then it would return on a regular basis along with some other regular pieces (500 Word Indies, Your Weekly Kusoge), and while it's not quite there yet, I'll still be doing these sporadically. These are all catalogued here, with the most recent one being the charming adventure (and RPG) PC game Hurry Fox:

FInally, some news on our other projects: In October we released HG101 Digest Vol. 3: The Guide to Retro Horror, covering all sorts of horror games from the 8- and 16-bit eras (and a few 32-bit games). The cover features include Splatterhouse, Ghosts 'n Goblins, and Zombies Ate My Neighbors, but other lesser known games are covered from across genres and platforms, including the grotesque arcade light gun shooter Chiller and the gruesome Elvira series of adventure-RPGs for Amiga and IBM PC platforms. You can find more info here:

Within the next couple of weeks, I'll also be unveiling HG101 Digest Vol. 4: Star Fox and F-Zero, which covers Nintendo's space shooter and sci-fi racing game franchises, as well as other rail shooters like Vanark and Gamera 2000, and a look at other projects by Argonaut Software, one of the original developers of the SNES Star Fox. This will probably be out early 2019, either January or February. Upcoming projects include digests covering the developers Treasure and Namco, as well as our long-awaited guide to Shin Megami Tensei and Persona!

Awesome, thanks for the update! It's looking great!