One of the chapters in the book is an overview of Jaki's highly specialised collection of drums and other equipment - and an important piece was his cassette machine. Here's an extract from the text: 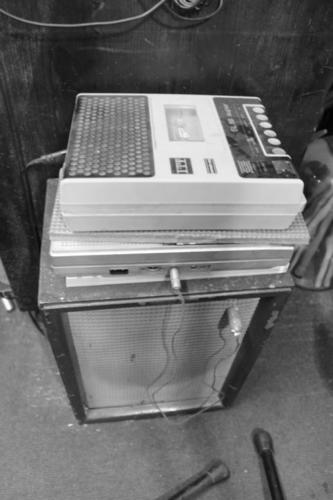 "The essential Jaki studio. Real low tech. A mono cassette recorder connected to a speaker Jaki had made himself at some point back in the 60s or even earlier.

Jaki used cassettes as a notepad – a rehearsal tool, recording not just himself for reference but also the groups who would play together in his room.

He enjoyed the simplicity of one button each for record and playback and that there was no complex set up with microphones.

He also experimented with the auto record levelling system of cheap recorders. Maf recalls one night Jaki playing gongs miked up through the cassette player and played back through the speaker. As the sound naturally diminished after a gong was struck the cassette player would build up the gain and then when the gongs were struck again it would duck, producing a “pumping” effect, emphasising the sustain of the instruments."

Consequently there are many cassettes waiting to be explored. I've uploaded 2 extracts here on soundcloud.

You can hear Jaki exploring 2 rhythms: one in 7, another in 4 - shifting the emphasis and changing the sound pallette as he goes along, whilst all the time maintaining his characteristic consitency of tempo and intensity, supported gently by the noise of his old mono cassette recorder.

The email for this update has an error in it I think - the link to this page doesn’t work.
I’m so excited by this book!! I can’t wait for it to come out. I shall listen to the Cassette recordings on SoundCloud shortly. How wonderful to be able to hear them.

Hi David - I don't get the emails so I can't check that link issue for you. I hope you managed to get to soundcloud OK and have a listen. There's plenty more where that came from! Cheers Jono

As a drummer, and pledger to see this book in print as soon as possible, the opportunity to listen to the cassette is, for me, superb. Polyrythmic, absorbing and hypnotic would be a fairly close description of what I hear. I'm always learning more from various drummers coming up with new ways to express that inner sonic energy. Listening to the pieces on the tape has me excited and enables me to now go into my home studio and slow my playing down which relates to both tempo and emotion which might be the same energy. Looking forward to the book.