I thought I'd just let you all know how it's going. I'm not far off 70% and someone I know has promised a big contribution, so I can see the end of this phase. After that, I'll be keeping you in touch with progress on the actual production of the book!

It's heavenly weather here at the moment. My pal Joanna Kennedy flew out to Greece with her daughter, my goddaughter, Eleanor, and they are both working in refugee camps there. Initially, they were both in Athens (where it's windy, according to Joanna), but Eleanor, being highly qualified and bursting with energy, has gone off to Chios, an island close to Turkey, where the situation in the camp is much more in need of professionals. I admire them both enormously and also I admire Norway, which is the home of this particular charity. Interestingly, I was in Strokestown for the poetry festival a short while ago and a group of young Syrians arrived from Ballaghadereen, which is where Ireland has homed a small group of refugees. The ones I spoke to had good English and all spoke of being received with friendliness and kindness, so I'm proud of the Irish people. But I think this country, that has sent out so many of its own people as economic migrants over the centuries, should be prepared to take in many more refugees, who have fled war and terror in their own countries. I've always been struck by how generous Irish people are, in the main.

And that goes for all of you reading this. I'm very aware of brilliant it is of you to put money into a venture, knowing you'll have to wait for the results. All I can say is that it'll be worth it! 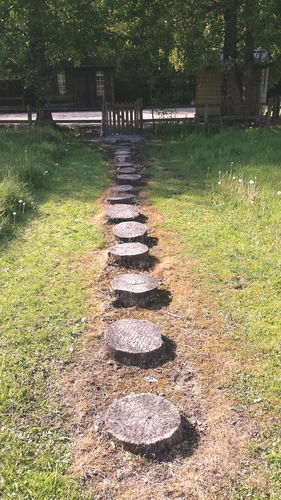 One step at a time! And here's a pic of Meg. 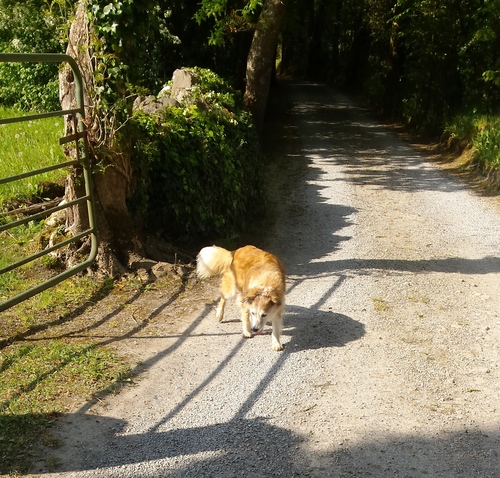 She's long been obsessed with that Beatles Abbey Road LP cover and this is her best attempt yet at a rural recreation.

Enjoy this lovely month of May, won't you?