Spring coming for sure.

Hello, my shedders! I love the Irish tradition that spring begins on 1st February, making the spring months February, March and April. Others reckon spring begins on 1st March. Yet others put it beginning on 21st March.Although winter is a season I wouldn't be without, I'm always glad when the days draw out. Would anyone care to march with me up to Leinster House to petition the government to keep the clock the same all year round? The change in the hour when winter approaches has always been explained by the plight of children in the north of Scotland going to school in the dark. Hmmm. How many children walk or even cycle to school, I ask myself? I'll leave you to ponder that one.

Personally, I'd let the birds tell us when spring has begun. Once they start gathering material for their nests, then that's official enough for me. I was going to accompany this shed blog with a photograph of a bluetit feeding on the peanuts I've put out for them. I had a perfect view of one that was clinging on to the feeder, and then another landed. Perfection! But I had to take the photograph through the window, so as not to disturb them, and I'm ashamed to admit that the window was so dirty, the image looked as if it had been shot through gauze.

So, instead, here's a close-up of some blossom in my front garden. 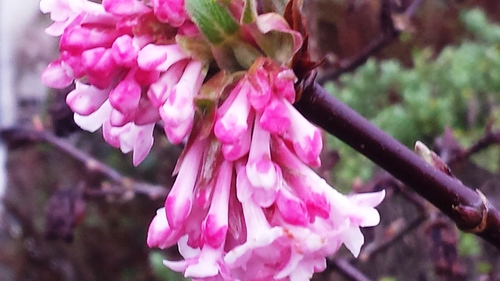 That should give us all heart. And we're approaching St Brigid's feastday. Tomorrow I'll be telling you about the traditions that are associated with St Brigid's Eve. And for those of you not familiar with the saint, I'd hazard to say that she is the female patron saint of Ireland, just as St Patrick is the male.

I'll be back in my shed tomorrow and hope to catch you all then!

Have you noticed too how the birdsong is so wonderful just yesterday and this morning! Love when you can feel that winter is almost gone.

The early morning bird song is very audible these past few mornings...Spring is a wonderful season in Ireland!

What a heartening song from the shed! Thank you, dear Margaret for all those lovely thoughts.