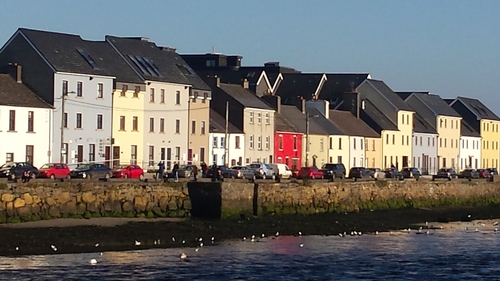 I was down beside the River Corrib on a lovely sunny day. It's one of the shortest rivers in Europe, but very fast flowing. In fact, the river gave its name to the little settlement that grew up on its banks. That became a town, then the city of Galway, so for a short river, it's had a big influence.

And I'll be down beside the Corrib tomorrow, when I'm giving a talk at Galway City Museum. I'll be concentrating on the fish, shellfish and seaweed that belong to the western seas and strands, with Co Galway and the Claddagh being important in the whole history of fishing in Ireland.

Here is a short extract from my talk.  '... Thackeray wrote lyrically of some trout he ate in Ireland on a sporting holiday. ‘…Marcus, the boatman, commenced forthwith to gut the fish, and taking down some charred turf-ashes from the blazing fire, on which about a hundredweight of potatoes were boiling, he – Marcus – proceeded to grill on the floor some of the trout, which afterwards we ate with immeasurable satisfaction. They were such trouts as, when once tasted, remain for ever in the recollection of a commonly grateful mind – rich, flaky, creamy, full of flavour. A Parisian gourmand would have paid ten francs each for the smallest cooleen among them…they were red or salmon trouts – none of your white-fleshed brown-skinned river fellows.’

Here's another snatch. (All of this will be in the appropriate chapter in Ireland's Green Larder.)

Early monks and scholars were familiar with the inland waters of Ireland. A 9th-century Life of St Ciaran of Clonmacnoise describes the Shannon as ‘very rich in different varieties of fish’, and the teeming fisheries of the Corrib in Galway are explained by the miracle of St Enna, who blessed the lake and ‘asked God that there should be a plenitude of fish there’. St Patrick is said to have blessed the Sligo river ‘so that it is the milch cow of the waters of Ireland, for in it fish is caught every quarter of the year’.

And here's a little about oysters.

The first Clarinbridge Oyster Festival took place in 1954 under the sponsorship of local publican Paddy Burke, one of the first to really promote oysters and sell them in the half shell at the counter bar of his pub. The festival was also vigorously taken up by the Moran family, the walls of whose Oyster Bar at Kilcolgan are covered with photographs of visiting film stars, sporting heroes and politicians, including the odd American president or so. The Clarinbridge festival became a great hit so Galway city soon wanted to get in on the action, and the city’s festival is inevitably played out on a much grander scale - these days, one festival follows the other and each has its devotees. This year the Galway festival runs between 22nd and 24th September.           Startling though it may sound, baby oysters develop as males and then slowly become females. Later, they revert back to being male - that makes more than one sex change in one season. (The trigger for these changes is usually the temperature of the water.) And while we are on the subject of sex, the story about oysters being good for your sex drive is actually true – oysters have eight times as much zinc as fillet steak, and zinc is the mineral most scientists claim can improve your sexual health – not just the human libido but also potency and fertility levels. In fact, oysters contain a combination of zinc and selenium - better yet for libido and stamina.

I love the native oysters when there's an R in the month, but if you are eating Gigas, then consider this. In Paris at a restaurant called Chez Julien, they served the oysters on a bed of cooked spinach in the shell, with a blanket of cheese sauce over the top and the whole thing browned in the oven or under a hot grill. Very delicious, too.

I'll be back to you all soon. I'm approaching two thirds of my target by now, but time is running out if I'm to get my book out when I want it, so PLEASE spread the word to anyone you know who might be interested.

Love the photograph... best of luck tomorrow... hope you get loads more pledgers!