Shedding at home and abroad

I've been quiet for a while, but under the surface, the feet have been paddling away. Here's a lovely butterfly to start off with . 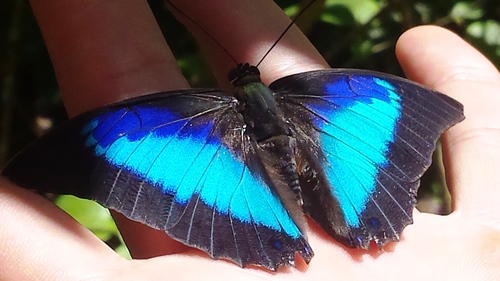 I think it's a Blue Morpho, which is a butterfly we saw a lot of on our tour around a certain Central American country. (Identity to be revealed anon.)  But if it isn't, it's definitely a native, and one we found in a fabulous butterfly farm, where I not only met butterflies galore, including ones which mimic an owl's eye on its wings, so that at night predators avoid it, thinking it's actually an owl. In the introductory talk, our fabulous guide Jordan introduced us to stick insects, to giant beetles and after he'd given us the real low-down on him, we all found Timmy the Cockroach a charming and admirable fellow.

But you want to know about more than this. The food in Costa Rica that we came across is the food of poor people. Rice and black beans, known as gallo pinto, is the staple. Tortillas, made with maize flour, are also very common. Pineapples taste utterly sweet and juicy and are so unlike the greenish, barely sweet fruit we find imported. Not surprising, since pineapples for export are picked unripe. And I wish I'd taken a photograph of the avocados we spotted in the bus station. They were the size of grapefruit.

But I didn't just eat the food. I cooked it! Here's me at our cookery class. 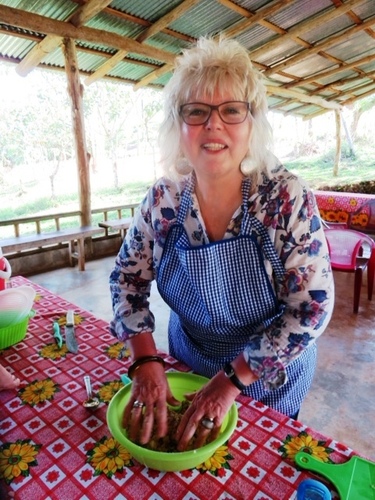 One of the highlights of the trip was our homestay. We arrived in a kind of commune, where several families grow crops, share ideas and work together, with a big communal building as the meeting point. Our group of 11 was farmed out to three different families and we were given the option of doing a cookery course with the wonderful Gisele. Here, I'm mixing shredded chicken, fried onion, a little red chilli and maize flour to make dumplings to go into the chicken soup. And very delicious it was, too. Plus, we learned how to make tortillas. The simplest thing in the world, but it takes skill to do it well. YOu mix maize flour with water. That's it. And you take a dob of dough about the size of an alley (big marble) and flatten it out with your hand on to a disc of plastic. (I suppose leaves were used, pre-plastic.) Think of making something with clay and you'll have the idea. The aim is to have a tortilla that is even, thin and not overworked. And then you make LOADS of them. 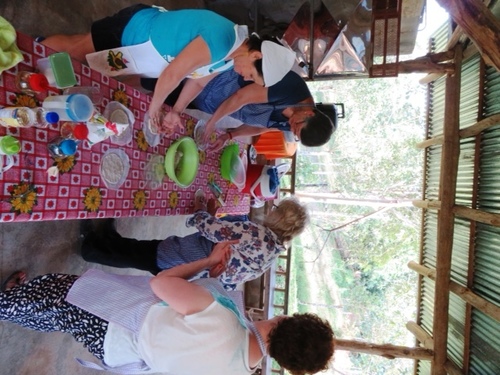 And if you drink too much tequila, you see things at an angle!
I'd better sign off now, but will be back.

I'm looking forward to telling you about my friend Ken's Great Coup!!!