Hello Shedders! I wonder if you're in a fever to know why the shed isn't a shed?As the man said, curb your enthusiasm, as I'll tell you.. 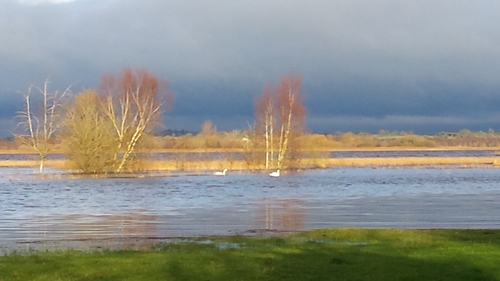 Yes, I know the photograph isn't of a shed. Duh! It was taken almost exactly a year ago when Lough Derg was flooded and the swans are swimming over a piece of land I usually walk over! I just thought you'd like it, unretouched as it is.

The shed was, of course, the original house. I don't know how old it is, but the original roof consisted of tiny little slates, the size of playing cards. My guess is mid-nineteenth-century. The house I live in - the original part - was built around 1949 and an Irishwoman back here on a nostalgia trip from the USA remembers her excitement as a young girl moving the ten yards into the new place. She was thrilled at the large kitchen with its fireplace big enough for a giant. And there were three rooms leading off it for use as bedroooms. Plus a separate square room that was hardly ever entered, as it was for best. Freezing cold, of course.

No bathroom, you'll have noted. That's partly because there was no running water. Nor was there any electricity. The family moved out and their cousins, two brothers and a sister, none of them married, lived here. When the rural electrification scheme was being rolled out in Ireland, they were given the option, but declined to take this new-fangled electricity, as they'd heard it could cause fires. Nevertheless, this place had a reputation locally of being a house where you were made welcome. There was a fire in the hearth and neighbours were invited to drop by when they liked.

The three old people kept clean by bringing back buckets from the shallow well down the lane. And they cooked over a turf fire. To help them, they had a crane, and it was the sight of this ingenious device that enchanted me when I first moved here from the Big Smoke. Mind you, there was a bit of smoke from the chimney, all right, due to a crack higher up. Most of it seeped out into what was at the time an unused room. Eventually, I fixed it.

I'll tell you about cooking over the turf fire next time. And explain what a crane is for those who've never met one. We'll get to food and drink in the end!

Beautiful pic and description of your house, Margaret.