Porridge for grown-ups! (Of all ages.)

At the suggestion of my pal Merrily Harpur, I'm going to give you the porridge lecture! Well, not lecture, so much as enthusiastic encouragement to share in the good times. 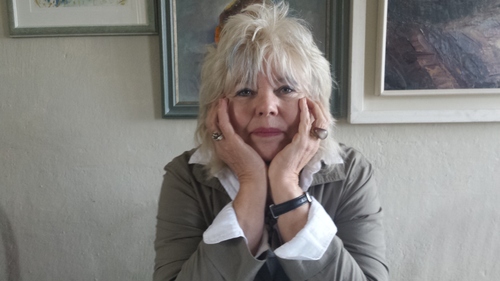 Ronnie Barker was a genius in Porridge, but I'm not on about that. I want to dispel forever any qualms you have about porridge for breakfast and I want to encourage you to offer yourselves the Rolls Royce of porridges for a few bawbees.

Most of the porridge oats you'll find on shop and supermarket shelves will be some variation on the steamed and rolled oat. This type of oatmeal cooks very quickly and can be dressed up (some might say disguised) with cream, whisky, honey, fruits etc. But another kind of oat is available. The husk is removed and then the grain is chopped into three with steel blades, leaving a small, hard bit of oat resembling a pinhead. Guess what it's called?  In Ireland, you can buy pinhead oatmeal very easily (and cheaply) as many bakers use it when making bread. If you don't find it on your supermarket shelf among the packs of oats, then look in the health food section or else a health food shop.

Pinhead oatmeal takes longer to cook, but this process can be speeded up if you soak it overnight. I've been doing it without measuring all these years, but this morning I checked how much I was putting in my big mixing bowl and it turns out to be enough to come up to the 12 fl oz level or 350ml level in my measuring jug. I'd have weighed it for you, but that would have meant digging out the scales. If you don't have a measuring jug, contact me and I'll sort you out.

So you've put a largish amount of oats into your mixing bowl. Now you give it a sprinkle of salt and fill up with water, so you have enough to easily submerge the oats. If you do it at night, when you wake up, you should find the oats have absorbed some of the water, so you might want to pour in a little more, so it doesn't get too dry. Then you cook it! I used to cook my porridge on the hob, stirring it now and again. But these days I bung it in the microwave and cook for 6 minutes. Then I take it out, look to see how much liquid is there, give it a stir and return it for another 2 minutes. After 8 minutes, you should find it's cooked, but microwave ovens differ, so use your skill and judgment!  At this point the porridge should have a resemblance to a good non-sloppy risotto. Here's a photo I took this morning. 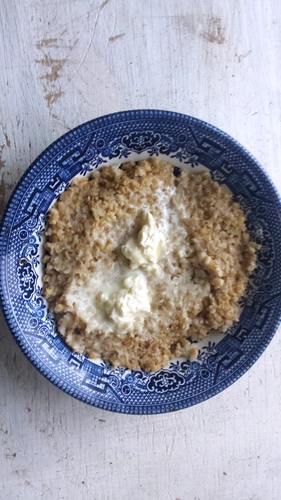 The white substance is natural live yoghurt, but you could eat it plain or with what takes your fancy.

The beauty of this porridge is that it will - I GUARANTEE - keep you satisfied all morning. I make a lot of it at a time so that I don't have to do this every day. I simply spoon a portion out each morning and heat it up, as the quantity I make is enough for 5 or 6 helpings. And I'll let you into a secret - if I've made soup, I find a big dollop at the bottom of the soup adds body.

The flavour is deliciously nutty and there is a satisfying texture to it. If you find yourself crunching the porridge, you need to cook it a little longer. Doh!  This old-fashioned version of porridge has been known under many names - stirabout is the most common. And it's what sustained generations of Irish people going back as far as we can go. No microwave ovens have yet been discovered in prehistoric Ireland, (perhaps they rusted away) but we know the Irish were growing grain as far back as a thousand years before the Pyramids. There's more about this in my chapter called Barley Loaves and Oatcakes.So give it a lash, why don't you? If you're not already one of the cognoscenti, that is.