Hello, my dear pledgers, supporters and - as I still think of you - my shedders.

As you will be pleased to hear, I'm not that far off now. And once I reach the 100% target, the team at Unbound gets cracking and the book is on its way to being published and you are not so very far off getting the book delivered into your deserving hands.

The wonderful Julian Roberts is scheduled to do the book cover and the illustrations inside. Expect style and originality - two of his many qualities. And I shall be continuing to spread the word, even beyond the target being met.

Now, since I spoke to you last, much has happened. I was at the mighty Strokestown International Poetry Festival, which is a fixture in my calendar every year. This year I judged the Percy French competition for humorous verse, and the winner, from Wales, delighted us with a learned paper on Kneeology! Some ingenious rhymes, including Chinese and Thai knees...

And I was also down at Darina Allen's Litfest. Darina, as you'll know, is the dynamo behind the Ballymaloe Cookery School, which is situated just a short hop from Ballymaloe House, where she first met Myrtle Allen, destined to become her mother-in-law.

The Litfest was organised on a huge scale, with talks and demonstrations, with a bookshop and a massive food hall, with garden tours and question and answer sessions, with tasting and dining and all things foodie and literary. I was, alas, not able to attend very much of it, but I met Kyle Cathie, who published my first book, Irish Days, and had a lobster roll with her. And we both went to listen to Sheila Dillon in conversation with Jacob Kennedy, of London's feterd Bocca di Lupo and VICO. I knew Sheila when I worked in London and wrote a piece about her and Derek Cooper, when he was presenting the Food Programme for the BBC and Sheila was producing. After Derek retired, a number of people presented the programme, but the core presenter is Sheila herself. It was great seeing her in action and I hope our paths cross again before too long.

I brought a little case of Dainties home with me. I usually insist on eating native oysters and rather look down my nose at Gigas. But how wrong I was. Here are a couple of pix for you. 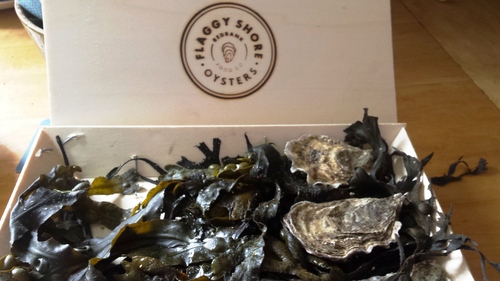 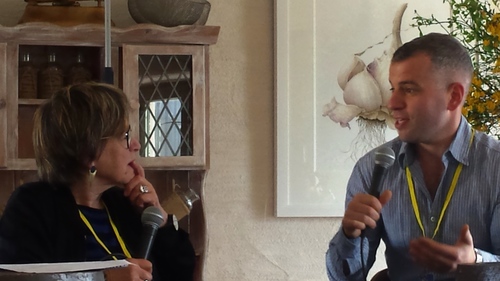 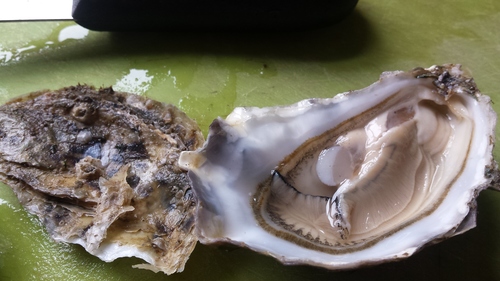 Today I was in Loughrea to catch the brilliant fish van that comes every Thursday morning. An enterprising Frenchman, StephaneGriesbach, set up Gannet fishmongers and all praise to him. Today I bought a massive turbot and some samphire to go with it. The price was reasonable, the fish spanking fresh, the cheerful Irishwoman who was behind the stall was ready to offer advice and, if I'd wanted her to, trim the fish however I wished. And,despite what I say in my book about the Irish not really loving fish, there was a good queue of people buying cod or mullet or sea bream etc. Most of the fish is caught in Irish waters and is waiting for a good home.

I have visitors coming and I'm going to roast the turbot, then serve it with new potatoes from Dermot O'Mara's fabulous farm just up the road, and I'll have to make some Hollandaise to go with it, won't I? The samphire will provide a vivid splash of colour and I reckon it'll be a feast.

Tomorrow is the Country Market morning. (For UK readers, think Women's Institute) I'll be getting my duck eggs from Josephine Lynch and some organic apple juice from the amazing and dedicated women who run An Gairdin according to organic and biodynamic principles. A tea brack might catch my eye, too, or a rhubarb tart.

And then home to look at the peas and broad beans pushing up through the soil. I sowed very late, but Mother Nature is very forgiving. I hope for splendid peas all through the summer. And my rocket is thriving. I need to put in some spinach now, too. I really need eight days a week!