I was down in east Cork this week, having lunch with Darina Allen. If you don't know who she is, I suppose I might say that she has taken the foundations laid by her mother-in-law Myrtle, and has built an entire shining city on them. She is a human dynamo, writing books, broadcasting, advising on food policy and running the phenomenally successful Ballymaloe Cookery School. Her daughter-in-law, Rachel, is carrying on the tradition, having many successful books and television series to her credit. And I hear that she and her husband Isaac are about to open a restaurant in Cork city - Rachel's.

I have known Darina for decades. When I was in London, working as deputy editor and food and drink editor at Country Living, I commissioned Darina to write for the magazine, found her to be a huge attraction at the Country Living Fair cookery demonstration theatre and also wrote about her cookery school for Food Illustrated. We also shared a publisher, Kyle Cathie, who published my first book, Irish Days.

After a tour of the school with Darina's aunt Florence, plus a tour of the grounds and farm builidings with her grandson Joshua, I enjoyed a delicious lunch and was chatting to Rebecca, who is organising the Litfest which is happening in May. Take a look at the programme - it's packed with very enticiing events.

And after lunch, Darina took me in to talk to the students about my book and my campaign to crowd fund its publication.
The next morning, I had an e-mail thanking me for my visit, telling me that Darina had passed on my details to the students, would be mentioning my book in her blog and was happy to pledge in person. Very generously so, I may add.

So that's a gratifying endorsement from such an important and influential figure. 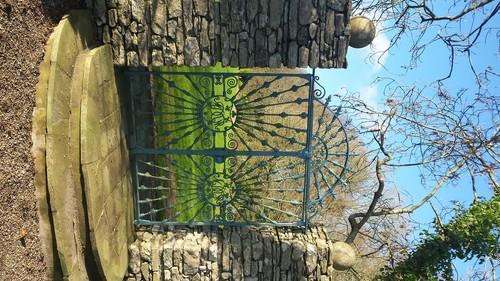 To see these gates from the Ballymaloe School grounds, all you have to do is lie on your side. Only a wimp would care about the picture being landscape instead of portrait. I did rotate it when I selected the photo, but it doesn't seem to want to stay that way!

I'm off to do a radio interview on Tuesday and I'll try, in the meanwhile, to learn how to send you an upright image next time!

By the way, I saw that where I walk my dog Meg every day the grass had grown so high, they had to cut it. In January!

Brilliant stuff, M, and how lovely to have Darina's support. She's a treasure.

Margaret, the best way to correct the photo would be to stay sober when you shoot it! I know from decades of experience.