I'm now in discussions with Unbound about promoting the book when it comes out! So we've come a long way from the early days when I was not even sure I'd reach my target. Well, I always believed I would and I shall ever be grateful to you, my pledgers, for stepping up to the plate, as we seem to be saying these days. An American sporting reference, I think, and even perhaps baseball, which we must NOT think of as rounders!

YOU, my pledgers (my shedders as I think of you) will be getting your super-duper copies in March, all being well. I'll be giving a talk at Galway City Museum on the Saturday before Easter Sunday (31st March) on the subject of the EGG. That weekend also sees Galway Food Festival under way and I may be giving a talk/reading there, too. The first time I'll have a book in my hands when I'm talking about it.

In the coming weeks I'll be thinking about festivals and radio interviews and television slots and discussion programmes and newspaper reviews and mentions in magazines and all the other hoop-la that promoting something entails. In the meanwhile, I'm trying to eat well. A recent lunch consisted of kale from my brilliant farming neighbour Dermot O'Mara (picked that morning) and some squid that I'd bought from the Gannet fish stall that arrives on Thursday mornings in nearby Loughrea. If you've ever cleaned out a squid, you'll know what I mean by the quill. It's an extraordinary substance that runs the length of the squid's body and, at first glance, appears to be made out of plastic. I wanted to take a photograph of it for you, but it didn't come up too well on the camera. But I can show you the before and after photos of that part of my lunch. 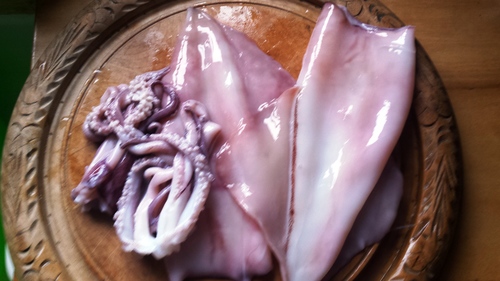 I simply cut up the squid, dusted lightly with seasoned flour and fried in butter. 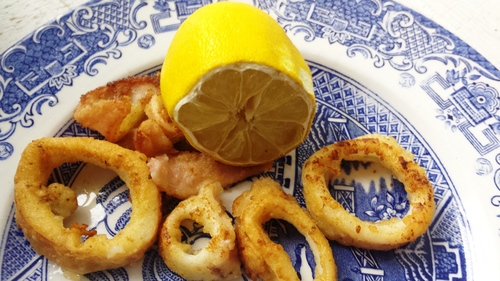 Did the Irish ever eat squid? Not that I'm aware of, but other kinds of seafood would respond to the same idea of frying in butter. Tomas O Crohan writes of his mother dipping limpets into oatmeal and frying them before tossing them to her hungry brood, out on the Great Blasket a long, long time ago.