An adventure story set in a prison for children, where the characters are busy fighting their emotional demons when a real one turns up

If you're keeping up, I've been working on the book since the Structural Edit came back. I thought it might be nice for you lovely patrons of the arts to know a bit more about what that involved.

The editor, a lady called Gill Harvey, did me a detailed note about the book overall telling me what she liked about it - which was thankfully the voice and my writing style and the characters and the setting and the basic plot - which is good, because those are the things which are really really hard to fix if they don't work.  And what she didn't like - which was that the first half of the book was too slow with too much setting up and back story and not enough action, and there was something quite significant that needed fixing with the last third, to make it more in keeping with a Young Adult story.  (Don't have adults be drivers of the story in a YA story, essentially, and I'd mistakenly done that). And too much telling, and that needed to be converted to showing.

It would be quite easy to bristle and get defensive at that, but I actually agreed with her - I just needed that fresh pair of eyes to help me see it.

Gill then did me a little summary of the main plot points of each chapter, and what she liked, and again what she thought would need to be changed.

And then the manuscript itself, which got annotated up, making it all much tighter and punchier and immediate, with notes and comments for the things she felt would benefit from new scenes or sequences. Some of that is just what seems like simple stuff, like changing my bolds to italics where I was emphasising, but others were showing me how to get the effect I was after quickly and crisply and not dwelling on a point once I've made it.  Downside of being a lawyer, we always want to make the same point three times and pretend that we've made three points.

So anyway, my rewrite is done now, and it is back with Unbound. I really enjoyed doing this - there was a lot to do, and it has ended up being around 3-4 hours of writing in the evenings and weekends every day for a fortnight. I cut a lot of backstory (including some that I really wish was in there, but it helped me to understand the characters better, so it was worth it) and wrote some entirely new chapters.

A good illustration of how much editing and cutting went into it - I think there are about 11 new scenes, but the book overall is 15,000 words shorter than the one I originally submitted. So now a lot more stuff happes in the book, but it happens in far fewer words, and as a result it is more pacey and more balanced. (The first half was slow before and the second half was like a drop down a lift shaft, and now it is more picking up pace throughout but isn't leaving the reader behind in the last few pages)

Here's a concrete example for you, and this is one of the new scenes.  In the original manuscript, I had one line, where one of the characters has a tattoo on his arm, a daisy chain. He adds a new daisy every time he cuts someone. That character Tony, tells another (Robin) that he's got a new tattoo, because he has cut someone else, a friend of Robin's, and that a girl within the unit has given him a homemade tattoo.  And the editors comment just said 'Let's see this happening'

So here's the homemade tattoo sequence - a brand new chapter in the book. You're the first to see it.  Oh, and don't try this at home. I'm not kidding about how much it hurts. 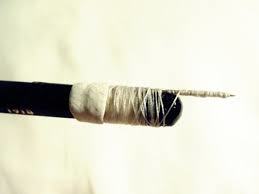 Casey was sketching, trying to replicate the poster of the sports-car she had on her wall, but it wasn’t going well.  The gullwing doors looked stupid on her drawing. She was actually pleased when Tony did his special knock at her door. She let him in.

“Suppose you’ve heard?” he said to her, face triumphant.

She nodded. Big fight with Brick, knife taken away from Tony again. He was trouble.

He rolled up his left sleeve. “I need another one. Gotta keep score.”

Casey went to her secret stash, got out her tattoo equipment.  No tattoo gun in a place like this, it would be Stick and Poke, homemade style. She washed her hands, soaped them up, dried them carefully.  Sharp sat himself down on her chair. He pulled a spare pair of socks out of his jeans.

He gave her a small flat bottle of vodka, shook it happily. She took a cloth and swabbed the end of it in the vodka, rubbed the cloth over the skin where the new tattoo would go.

She tapped her watch. They had to let it dry.

“Shame it was such a small nick,” Sharp said, “I’d really like to have carved him properly.”

Casey rolled her eyes at him, dramatically.

They sat in silence for a while until the alcohol dried on his arm.

She could see him look at all of her posters.

She nodded. She absolutely did. There was nothing better in life than being behind the wheel of a car and driving it as hard as she possibly could. That’s what had gotten her in here.

Casey took a black pen and sketched out the next daisy image, frowning with concentration. She showed him it in the mirror.  She had made it a big one, because Brick was big. And it was a big deal, cutting him. There would be consequences.

In her little box, Casey had a needle that was jabbed into the eraser of a pencil, lashed in place with cotton and held down with Scotch tape.  She picked the pencil up, checked the needle was firmly in place. Sharp looked at the needle, studying it. Casey smiled. Most people didn’t want to see the needle, shied away from it. Sharp always wanted to show he wasn’t afraid.

Casey sparked up her lighter and let the flames lick over the needle.

Sharp unballed the socks and put one into his mouth, nodding to let her know that he was ready. Casey dipped the tip of the needle into her bottle of India ink, and began.

She pushed the needle into his skin, at the start of the design. The room was quiet and there was a popping noise as the needle went through the skin, taking it into the second layer of skin. She paused, then pulled it out. Moved along the design slightly, and did the same again. Again, the pop, like bacon fat in a hot pan.

The blood didn’t come up until the fifth insertion, when she pulled the needle out, a bit of blood bubbled up. Casey thought that she could see Sharp grin, but with a sock in his mouth, she couldn’t be sure.  You couldn’t tell with this method which insertion was going to hurt a lot and which would make the subject scream in pain, but she knew that Sharp wouldn’t flinch or quit, no matter what.

"Like bacon fat in a hot pan" - really? As a nurse who's stuck many a needle into various individuals over the years (not with ink I admit), I don't think I've ever heard a noise when you put the needle in. Okay, there's the occasional screech, or howl from a little one, but no pops! But otherwise good reading.