An adventure story set in a prison for children, where the characters are busy fighting their emotional demons when a real one turns up

I thought I'd write a little about the setting for In Secure, my book that you can pledge for here

It is set in a Secure Accommodation Centre, called Saffron Park, which is located on Dartmoor. Secure Centres are a special sort of children's home where children can be locked up - they aren't the same as a juvenile prison or Borstal, in that a lot of the children there won't have committed any crime - they are there because they run away from home generally. Sometimes their own home, sometimes foster homes or other children's homes. And because when they run away they put themselves in danger, they hurt themselves or other people hurt them, or sometimes they hurt other people.

These places really exist, and there are children much like the ten children that I write about in them.

I was interested in writing a book where, well, if you imagine the Harry Potter series but now imagine that Draco Malfoy would be considered the goody-two-shoes of the book. A lot of fiction for young people, the characters are heroic - sometimes with flaws, but nonetheless straight heroes. You know Katniss is going to stand up for the weak, you know Harry is going to fight evil, you know Cyril and Robert and Anthea are going to try to pay for the ginger beer they drank when they were stuck in the Church after their wings wore off.

I thought it would be more interesting to read about characters where you weren't sure, perhaps could never be sure which way they might react in a given circumstance - because their circumstances mean that they aren't heroic or noble. They might be capable of those things, but they each might be capable of out Voldermorting Voldemort, if the opportunity arose.

So, a set of children all with problems and worries and flaws and secrets, all locked up together seemed like a good starting point.

And then I was thinking about two memories I had.

The first was being seven years old. My bathroom had a lock on it. A chubby silver lozenge of a lock that you would turn to the left and it would lock the door. I was always told not to lock the door - the lock was for grown-ups and I wasn't to use it. I don't really remember what was in my mind when I did lock it. I remember how scared I was when I tried to unlock it and the lozenge was too stiff and heavy to move back. I remember panic that went up through my feet, made my chest pound and gave me the taste in my mouth I'd only ever got from accidentally eating a bit of Kit-Kat that had a shard of tinfoil still stuck to it.  (Michael Stipe was right - aluminium really does taste like fear).

I waited and waited. I tried the lock again. And again. I wrapped a towel round my hands, hoping that I'd get more leverage and the dampness of my hands would be counteracted. It didn't work. I took off my shoes - trainers that were yellow and black and had pictures of jungle cats around the outside just above the sole (cheetah, lynx, puma, leopard), and hit the lock with those. What I didn't do was shout for help, or bang on the door.

Because as scared as I was of being locked in that room, of never getting out, of being in there, I was just as scared as having to tell my parents that I'd turned the lock. Broken the rule, and not only that, been too weak to get away with it.

Eventually, it emerged that I was trapped in there. I think someone came to try to use the bathroom, found it locked and asked a series of questions that didn't take away that tinfoil taste on my tongue one bit. None of the suggestions for how to get out worked.

And then my dad got his window-cleaning ladders and climbed up to the bathroom window, which I had to open. I was too scared to climb down the ladder so he had to climb in and open the lock.

I left that house 12 years later, and I still never wanted to look directly at the lock the whole time.

THEN the second memory. I was about 26, and starting out as a care lawyer. One of the things I had to do from time to time was advise on Secures - should such and such a child be locked up for their own good, were the tests met, was it the right thing to do. And my boss decided it would be a good thing for us all to visit a Secure home, to see what it was like. I really didn't want to go. I knew I wouldn't like it. Like I know without having to do it that I wouldn't enjoy sword-swallowing.

And I thought, "I can't get out of here. I can only get out if that person wants me to get out."

Obviously I crushed that down with "She's going to open the door now, you're not really locked in, she's opening it right now with two different keys"

But really I was just that seven year old stuck in the bathroom again.

There are all sorts of fears to write about or think about - you can scare people with snakes, or falling, or men with hooks for hands hiding in the back seat of your car - my friend Matt is so afraid of sharks he can't take a shower without putting the plug in (yes, because sharks can obviously come up through the plug hole, that's exactly how sharks work). But I knew that I understood the fear of being locked in, and I think most other people can react to it too.

So, that's why the book is set in something like a prison. 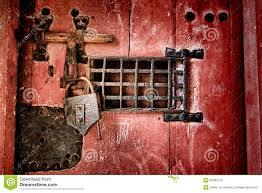