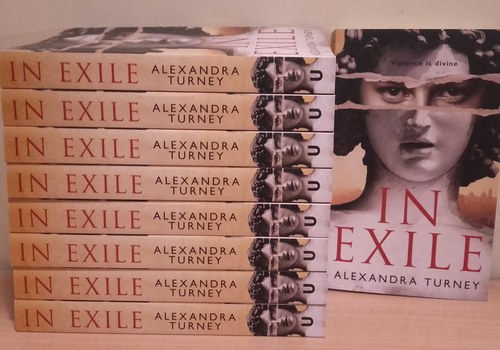 It's here! My copies of In Exile arrived this week, and pledger copies should be on your doorstep or in your inbox very soon...

Opening the box and seeing the book for the first time was exciting, but the most surreal moment came on the metro. I was sitting on the train on the way to work, somewhere between Bologna and Conca d'Oro, looking at the book. Then it occurred me to that it was exactly there - on the metro between Bologa and Conca d'Oro - that I first had the idea for In Exile, more than five years ago. "What would happen if Dionysus were reborn in modern Rome?" I wondered. This book is the answer.

I'm still in the process of organising the details, but I have a date for the book launch in Rome - Sunday 24 February. The event will be at a bookshop in central Rome (either Otherwise or Altroquando, which are located opposite each other on Via del Governo Vecchio), most likely late afternoon and followed by drinks somewhere. I'm doing the event with fellow Rome author Tiffany Parks, whose book Midnight in the Piazza was published by Harper Collins last year, as part of Otherwise's "Women Under the Influence" series.

No news yet on a UK event, but hopefully something in the summer.

Thank you to those of you who have liked my Facebook page (this will be the place for updates post-publication) or added In Exile on Goodreads. These may seem like small, insignificant things, but authors appreciate them! And thanks again to all of you for pledging - you turned a metro daydream into a real book, with pages and everything!

I hot an email saying the ebook is available to download but the links don’t seem to work. I think it’s been sent out too early, the download page says “Nothing to download yet”.