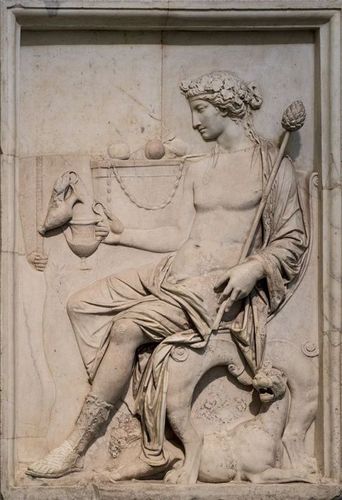 (Dionysus in a Neo-Attic relief, Museum of Naples)

Dionysus - the Greek god of wine, fertility, theatre, religious ecstasy and ritual madness - is one of the protagonists of In Exile.

I discovered Dionysus when I was a teenager, doing an A-Level in Classical Civilisation. One of the set texts was Euripides' The Bacchae, a Greek tragedy about Dionysus taking revenge in spectacularly bloody fashion when the king Pentheus tries to suppress the worship of this effeminate foreign god (who also happens to be his cousin). Spoiler: the play ends with Dionysus sending the women of the town into a violent frenzy; Pentheus gets literally torn to pieces by his own mother. Dionysus: "this is what happens when you don't respect me".

I gave Grace (the other protagonist of In Exile) my fascination with The Bacchae. In the first chapter she reads the play in the bath:

Horrible, thought Grace, eagerly turning the page. It was the most horrible thing she’d ever read. Then came the lamentation, the god returning to announce the family’s exile, black-eyed and imperious. Grace was transfixed until the very end, when the perfunctory chorus broke the spell.

Gods manifest themselves in many forms,

Bring many matters to surprising ends;

The things we thought would happen do not happen;

And that is what has happened here today.

She sighed and flung the book over the side of the bath, where it fell on the floor beside her towel. It was too soon to make sense of it, to know what it meant or what the message was, but perhaps it wouldn’t matter even if she never knew. She didn’t really want to understand. The imagery was enough. It had given her a vision of another world, a vision of mystery and violence unlike anything she had ever known.

I loved The Bacchae for the same reason as Grace - the compelling combination of religious mysteries and extreme violence - but I was also drawn to the character of Dionysus himself. A great part of his appeal was how effeminate and camp he was, flirtatiously rearranging Pentheus's hair and clothing, and uttering remarks dripping with sarcasm and dramatic irony. At the age of 16, obsessed with androgyny and glamour (see also: David Bowie), the figure of a beautiful, effeminate, vengeful deity was irresistible. 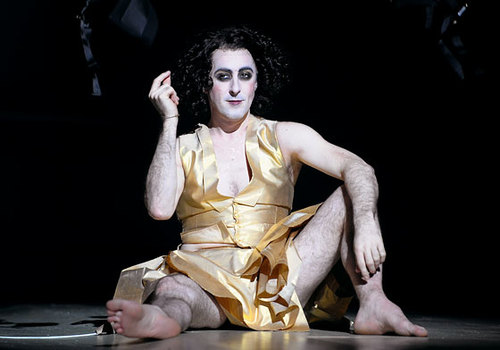 I decided to do my coursework on representations of Dionysus in art, and took myself off to the British Museum one morning, to look at Greek vases. I somehow ended up being given a a private tour of some galleries that were closed to the public, so it was just me and a member of staff, peering through the glass at vases featuring Dionysus - usually identifiable by his wine, ivy leaves, animal skins or thyrsus (a spear topped with a pine cone). The man at the British Museum seemed to approve of my dedication to Dionysus; he called me "assiduous" and said he hoped to see me on the front of The Times when my A-Level results came out.

My teacher didn't let me do my project on Dionysus in the end, and I never appeared in The Times, but the fascination with Dionysus endured.  When I discovered the genre of "gods in exile" writing and decided to bring a Greek god back to life in my novel, it had to be him.

Just as there was no question of the god being anyone other than Dionysus, I always knew that his followers would be teenagers. Grace is 15, just a year younger than I was when I first read The Bacchae. Dionysus is the outsider god - the foreigner born to mortal mother. He's beautiful, rebellious and sexually ambiguous. He offers his followers sexual freedom and alcoholic ecstasy. To a teenager, what character could be more appealing? It's no wonder he's been re-discovered by the Tumblr generation - teenage girls who create fan art and share suggestions for small acts of devotion ("wear fruity scents";"find ways to add more ivy into your life").

But whether you're 16 or 60, I believe the appeal of Dionysus is eternal. He's the ultimate temptation. The idea that even the most stiff and straight-laced of us could, under his influence, let loose and indulge in the most extreme forms of hedonism. The cult of Dionysus is not about prosaic drunkeness, but transcendence.

The Dionysus of In Exile offers unbridled hedonism and transcendence, but at a cost. As Euripides and hangovers teach us, every pleasure has its price...