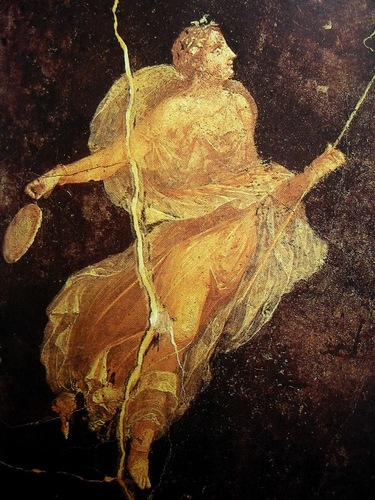 (A maenad - from a fresco at Pompeii)

If you're wondering where the book is, the answer is that technically, it still doesn't exist - at least not in printed form. But as I've discovered over the last few months, producing a book is a lengthy process, involving lots of people over the various stages, working to different deadlines.

As it's been a few months since In Exile was funded, I thought it was time for a quick update.

Over the summer I worked with my amazing editor, Eleanor, on the structural edit. This is the main edit, covering things like character development, style, narrative flow and so on. I thought that the structural edit might involve cutting things out; as a reader, whenever I think "This book needed a better edit", it's generally because it's much too long. But In Exile actually ended up growing by several thousand words, as new scenes were added and characters were fleshed out. It's now 87,000 words - about the same length as Nineteen Eighty-Four, or a sixth of War and Peace (which I will read...one day)

Things I learned from doing the structural edit:

The feedback of a good editor is invaluable, and as a result of the structural edit, In Exile is now a much better book. Thank you Eleanor!

The next stage is the copy edit (a round of editing that focuses on spotting mistakes, such as misused punctuation). We're moving slowly towards publication, and now have a provisional publication date at the end of January.