2 months to go till publication.... 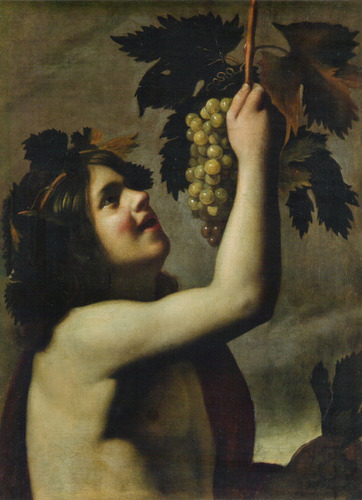 (The Young Bacchus by Tommaso Salini)

If you haven't already bought In Exile, here's where you can pre-order the book:

If you want to order online but think Amazon are evil, consider Hive - with the pre-order offer, it's the cheapest deal, and they also support local bookshops. When you buy from Hive, a percentage of the sale goes to a bookshop on the high street.

You can also ask at your local independent bookshop.

(Mysteriously, on some websites In Exile is labelled as "romance". I often have a hard time trying to explain exactly what genre it is, but it's certainly not romance!)

The end of the editing

Over the past couple of months I've been busy with the editing and proofreading process. Reading your own work again and again is a strange experience, especially once the formatting and layout changes and you suddenly get the disorientating sensation that you're reading someone else's book. Also, frustratingly, sometimes you don't want to change something until you've already read it 439 times. All of a sudden you start getting indecisive about a word choice. Paving stones or flagstones? Flagstones somehow sounds nicer and makes me think of Gormenghast and the Cocteau Twins, so I went with that. But it's tough when you get to the final stages, and you know that you won't have the opportunity to make any more changes. After endless scribbled out words and annotations, your story transforms from an idea into something fixed - words printed on a page. No more changes.

Of the course the next stage - people actually reading the book and coming up with their own ideas and interpretations - is in many ways more exciting, but part of me will be sad to let In Exile take its final form.

Dean Martin is dead, but not dead enough

When you're in the middle of writing a book, you don't think about copyright laws. As you're wondering whether a character should live or die, potential legal issues are the furthest thing from your mind. But as you get closer to publication, you discover that a quote can get you in trouble.

If the writer you're quoting from is long dead, you're probably okay. Any work published before 1923 is considered "in the public domain", which meant I was free to quote from Shakespeare and Swinburne. Using a line from Dean Martin song, however, was not so straightforward. Copyright laws mean that song lyrics are basically protected for the songwriter's lifetime, and for 50-100 years after his/her death. If you quote lyrics without seeking permission, even if it's literally just a line, you risk legal trouble.

The extract of the song I wanted to use was so short that I probably could have got away with it, but Unbound advised me that it was better not to take the risk, so I cut it. Unlike Shakespeare, Dean Martin and the songwriters of Everybody Loves Somebody are not dead enough (yet).

One of the most awkward things I've had to do so far is ask authors if they would consider providing a blurb (also known as an endorsement). You know when you see a book cover plastered with recommendations from other authors? Usually Stephen King or Hilary Mantel? (They seem to be particularly generous.) It's up to the publisher or the author to politely ask Famous Author to read the book, often within quite a short timeframe, and provide a short quotation about how thrilling and unputdownable the book is.

Unfortunately, if you're an unknown debut author with no contacts, and you're asking busy authors to read your book during the run-up to Christmas, it's tough. So far I've been getting "nos". Very polite "nos", but "nos" nonetheless. The longest of long shots, I even asked Donna Tartt (via her agent's assistant), and was told that "she doesn't given endorsements".

However, if I don't succeed in getting a Famous Author to endorse my book, I can console myself with the thought that it could be worse. A book recently had to be pulped because it was published with the endorsement "Never fails to disappoint" on the cover, instead of "Never fails to deliver".

I'll be back with another update in a month or so, when I have a cover to show you and news on the book launch. If you're looking for something to read in the meantime, I highly recommend The Mere Wife by Maria Dahvana Headley (fantastic feminist re-telling of Beowulf in suburban America) and Everything Under by Daisy Johnson (haunting exploration of mother-daughter relationship based on the Oedipus myth). Also, take a look at the Unbound catalogue, and see if there are any other books you can help bring to life...