Why IMMORTAL? Why fiction? Why now? 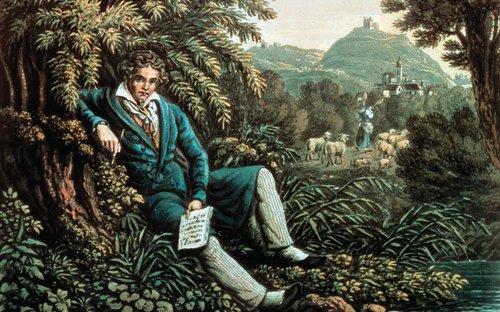 The other day I was in a London music library, trawling the Beethoven shelf. My goodness, but there's a lot of writing about him. Some of the books were published in the early part of the 20th century - topics such as, to paraphrase, "Beethoven is all about strength" (disconcerting in view of what was happening in the late 20s to 30s); others involve up-to-the-minute scholarship with tables of symbols that analyse the workings of, for instance, his late string quartets.

I enjoy browsing: you never know quite what you're going to find. The most useful publications, for my needs, were a small volume of personal reminiscences of Beethoven by those he knew, and a book of academic papers, Beethoven Studies 3, which contained a meticulously translated and annotated version of Beethoven's diary, prepared by the leading Beethoven scholar Maynard Solomon.

The books on that particular shelf had certain things in common. First, they are squirrelled away in the music library, where a lover of general 19th-century history, society, literature, painting or fiction is never going to see them - unlike "biography", which is in the main library and comprises accounts of the lives of people who have done interesting work in any field other than classical music. Then: what of their function? In the old books, the writing is dated. In the academic ones, the writing is sometimes like chewing dry muesli. There are a few, good, newish ones, but they are fairly polarised in tone and length. John Suchet's is highly readable, and I wish it were longer. Jan Swafford's, by contrast, runs to 1077 pages and you do not want it to fall on your toes.

Intriguingly, I can think, offhand, of only 3 female writers who have published widely distributed work on Beethoven. One is Emily Anderson, whose translation of the letters is absolutely invaluable and dates back to 1960. Another is the academic Rita Steblin, whose splendid articles I have been running to earth in various journals whenever and wherever possible. And in the 1980s the German scholar Marie-Elisabeth Tellenbach wrote a book about Beethoven and the Immortal Beloved, which is full of fascinating material, but has been translated only into excruciatingly awful English. Tellenbach and Solomon have had heated exchanges on the Immortal Beloved topic in various articles, as have Solomon and the translator, and Swafford and the translator. Tellenbach and Steblin share a theory about the Immortal Beloved which to me is the only interpretation that makes emotional sense.

I am certainly not saying that only a woman can make emotional sense of this situation - the theory they present is shared by some of the men, notably Suchet. But gosh, a few of the other men have missed the point. Some suggest that the letter itself is a fictional construct and the Immortal Beloved a non-existent idealised vision of the Perfect Woman. If you look at the text, though, she gave him an actual pencil. Muses do not generally carry pencils. Nor do you write to them complaining about slow post or transport delays.

One thing is certain. We will never know the whole truth: not least, because Beethoven himself was extremely good at hiding it. It seems that a lot of papers either vanished, were stolen or were perhaps destroyed by...someone with a personal reason for getting rid of them. Unless those turn up one day, we will stay in the dark.

We can infer. We can go by what little there is, which is all we can go on - but even that depends on how you interpret the material. Most theories make assumptions about phrases in Beethoven's letters that could, in fact, mean something completely different. Here's an example: much has rested on the interpretation of an initial in Beethoven's Tagebuch that is thought to be an A, in a phrase that has been interpreted as relating directly to the Immortal Beloved individual. Looking at a photograph of this manuscript, I was convinced it does not look like an A: it appears as if either the ink has been smudged, or the letter has been tampered with - or, as Steblin has suggested, it is not an A at all but a messily-written "St", which is the most plausible of all, while the context of the sentence is open to many different views. That doesn't mean it is definitely not an A. It could be. It just means that the issue is not as clear-cut as some would like.

This could - and does - go on and on and on. I've been reading about it for years. But there are a few contextual issues that are clear to me that do not seem to have been opened up to general music-lovers. One is the societal structures at work against Beethoven and the mysterious woman. Another is her likely fate. Another is that there are certain things in the music that relate directly to this matter. And we can pooh-pooh the notion as much as we like, but that doesn't mean they are not there.

New interpretations arise all the time. This applies even to something as famous as the 'Moonlight' Sonata. I have just bought Murray Perahia's new edition of it, which has a fascinating preface. Next time, I will tell you what it says. It's a revelation (though, spoiler alert, not about the Immortal Beloved).

In the meantime, I haven't answered the 'why fiction?' question. OK: because it can show the context, the characters and the fallibility of our assessments in a new, vivid, necessary way. It is one interpretation of a situation that is, by its very nature, unknowable - and being fiction, it acknowledges in its very form that unknowability.

We can't be sure. What we can do, though, is have an unreliable narrator...

I am about halfway through writing the first draft, and loving the process. The first draft is the fun bit. The transformation of that into a proper book is the headache. I have that to look forward to... Meanwhile, the crowdfunding has reached a wonderful 76 per cent.

I'm delighted that Universal Classics has provided a bundle of four stunning CDs to offer as a NEW pledge reward - recordings on Deutsche Grammophon and Decca by the Takács Quartet, Maurizio Pollini and the Vienna Philharmonic - and you can find this by scrolling down the pledge level list. They gave me two lots, and one has already been snapped up, but you can still get the other one - you could upgrade your existing pitch for this if you've already signed up.

My profound and heartfelt thanks to everyone who has pledged so far - your moral support is absolutely invaluable to me and your generosity has left me awestruck! I will do my best to give you a really good book to read.