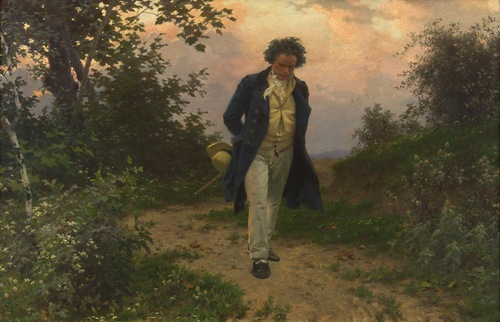 In these weird times, it's good to try to maintain business as usual as far as humanly possible, so here is a Friday update.

I spent a splendid afternoon yesterday talking to the academic and writer Leah Broad about IMMORTAL and other matters musical, an interview that will go out on her podcast series. Among a range of interesting questions that she put forward was: how we find out who Beethoven really was, under layer after layer of mythologising that has built up over two and a half centuries (don't imagine that the myths only began after his death - even his father was at it). I've been thinking this over... Here are some of the bigger myths, and a few suggested solutions.

1. Beethoven was mad. (See also: portraits over the years)

No. He did have a heck of a temper, but that is different. He was one of the strongest, sanest and most intelligent people you'd have been likely to meet around Vienna.

Some evidence has come to light in his conversation books that he may have retained a little bit of hearing in his left ear. He gives advice to others about the importance of not straining the ears and mentions that this has done him some good. In the Vienna museums you can see some of the aids he used at various points: ear trumpets designed by Mälzel (who developed the metronome too), a hood that sat on the piano to concentrate the sound within, and a thin piece of wood that he could place against his teeth, jaw or behind the ear to convey the vibrations from the piano to the bones.

If you ask any person who has a bit of hearing loss or tinnitus what it is like to attend a noisy party, they will often agree that it is hellish. The distortion of sound, the assault on the ears, can be painful and it is generally impossible to hear what anyone is saying to you. It's not surprising if he didn't want to put himself through this. And living alone? This wasn't out of choice, at least not at first.

4. But people thought he was rude, horrid and nasty.

He would have shouted because he couldn't hear well enough to judge the volume (see also: many other people who are also deaf). He didn't suffer fools gladly, but I can't say I blame him. Nevertheless, look at the way young people adored him. Take, for instance, Fanny Giatassino, the teenaged daughter of the head of the school to which Beethoven sent his nephew, Karl, for a while. She had a crush on the composer and would have loved to develop a relationship - but he told her gently that he loved someone else, even there was no prospect of him ever being able to marry that person. Then there was the young musician Karl Holz, who was second violin in Ignaz Schuppanzigh's quartet after the great man came back to Vienna from a spell working in Russia and reformed his ensemble; Holz was devoted to Beethoven and was one of the three people who after his death discovered the Heiligenstadt Testament and the Immortal Beloved letter in the apartment. The kindest gesture of all is one that he sent to a little girl named Emilie in 1812 - probably the nicest response a fan letter has ever had.

5. There are three periods of Beethoven works: early, middle and late.

At the time of the "Eroica", Beethoven deliberately jettisoned his old methods in order to seek a "new path"; this was the start of his "heroic" period, which produced such masterpieces as the central six symphonies, the "Waldstein" and "Appassionata" sonatas, the "Razumovsky" Quartets Op. 59 and much more. It is also true that the late works occupy a space all their own. But the risk with the term "early" is that works falling into this category, i.e. before about 1802, are too easily dismissed as juvenilia. If he had never changed the way he wrote, he would still be among the greatest composers of his time for pieces that include the first 14 piano sonatas, the first two symphonies and piano concertos, the Op. 18 string quartets...the list could go on. If in doubt, just listen to this lecture by András Schiff about the Piano Sonata Op. 10 No. 3: https://www.youtube.com/watch?v=V50x4VDgTYg

6. Beethoven was mean about Haydn, saying he learned nothing from him.

To see why, consider his relationship with his father; then look at his aspirations for musical study; then see what he did later. His father, who was an alcoholic and used to beat up his sons, tried to turn the gifted young Ludwig into a child prodigy performer. Ludwig didn't take kindly to this and it probably accounted for some of his later problems with authority figures - including Haydn. Next, remember that he wanted to study with Mozart, but because of his mother's illness and his subsequent responsibility to look after his younger brothers, the opportunity passed him by. Mozart agreed to accept him, but Ludwig had to go back to Bonn, and by the time he returned Mozart was dead. So Haydn, regrettably, was second best. Later, once he was well established, Beethoven could acknowledge his debt to Haydn with humility. At the last gala performance of The Creation in Haydn's presence, it is said that the crowds parted like the Red Sea to let Beethoven through to kneel at the elderly composer's feet and ask for his blessing.

He did not like various patrons' demands that he serve them as performing monkey, that's for sure, and the virulence with which he rejected such demands is unmistakable (see also: his father's prodigy-coercion attempts). Yet he liked nothing better than improvising for those he was close to, or - particularly - those whom he could help. From time to time he acted almost as a kind of music therapist, using his improvisation to tap into the troubled spirits of listeners such as Antonie Brentano, who was deeply depressed after her father's death, finding the right shade of emotion in the music to move them to tears and enabling them to find this crucial release.

8. Beethoven drank himself to death.

He liked his wine, and as his father and brothers had drink problems, chances are strong that the trait went into him too, to some extent. It is not entirely clear whether he died of liver cancer or of sclerosis - I have seen both theories. BUT personally I think he may have had coeliac disease. It would not have been recognised at the time, of course, but this serious illness that involves gluten intolerance could have accounted for the continual stomach upsets he suffered, the periods of exhaustion and depression, and an early death from cancer of the bowel and liver. This is my personal theory and I've not seen it explored anywhere, but I think it could be worth looking at. Another theory is lead poisoning, and I suppose that is possible too. But I want some clever person to take a look at the coeliac idea. I hear you scoff at the rubbish that you think gluten intolerance is. I promise you, coeliac disease is a serious matter and predisposes you to bowel cancer, only sometimes they don't tell you this until it is too late. This is what happened to my father. Descriptions of Beethoven's ill health look familiar.

9. The Immortal Beloved was his sister-in-law Johanna and the nephew, Karl, was his natural son - must be, cos the movie says so.

Bunkum. He may have had a "natural" child, but it wasn't Karl. He had good reasons for fighting Johanna for custody - he was concerned that she had been convicted for theft, for instance, and he seems to have held great anxiety about keeping the family name squeaky clean, since undoubtedly it would reflect on him and potentially his work. The entire incident did the boy Karl a great deal of harm and rebounded horrifically against Beethoven in the end.

In the grand scheme of things, 250 years is nothing! We don't call Shakespeare "early theatre" when the art form goes all the way back to ancient Greece. Ditto for music. Beethoven speaks to us as strongly now as to any previous generation - perhaps more so than ever. We should never, ever ghettoise him with terminology and restrictive attitudes. I see him as the first Romantic, in many ways; but more than that, he is an eternal voice that speaks across the centuries, showing us the best of all that humanity can be.

Thank you, everyone, for your support and kindness - and remember, if you haven't yet pledged for the book, you still can! Most of the pledge levels are still available (except the LPO concert and the Early Bird) and every little helps. If we can raise some more funds we might be able to get a good historical picture for the cover, which at the moment is looking unlikely (these things can cost a lot).