The real battle: truth versus entertainment 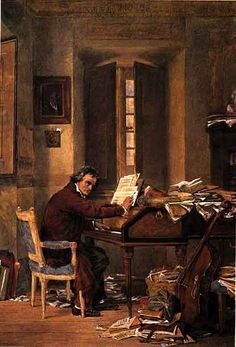 It's the morning after the night before. Happy Friday 13th, everyone. What sort of a place will the UK be three years from now? How the blazes did we get here? (And can Beethoven help?) (Above: I'm glad to see his study was even messier than mine.)

These concerns do have elements in common with IMMORTAL, which is why I'm devoting this week's Friday update to them.

One thing that Donald Trump and Boris Johnson share is that both have been on TV shows - Trump as centre of the US's The Apprentice, Johnson as satirical news quiz host on Have I Got News for You. People are used to being entertained by them. (And they are both blond. People seem to like blonds.)

It's a peculiar quirk of human nature to prefer the utterly monstrous to the vaguely meh, and to prefer the entertainment value of the former to the latter's earnest, well-meaning anxieties. The question is: what constitutes entertainment?

Once upon a time, back in the frivolous Noughties when music features in national newspapers could be 1200 words long and might be actually read, I had a little flirtation with a rising trend of the time: contrarianism. Having heard Handel's Messiah once too often, I penned a semi-satirical piece about how irritating da capo arias are and how we revere Handel just because he lived in England, when actually Bach was a whole heap better. This caused such a rumpus that I ended up being roasted over an open flame by Sarah Montague on Radio 4's Today programme. Which kind of proved the point I was trying to make, of course...but the thing is, it should never have been taken seriously. It simply made a splash by being controversial and therefore entertaining. It got attention. (And I didn't much like it.)

There's been a lot of attention-grabbing contrarianism around us in the decade since. In a world where people want fast-food soundbites instead of meaty material for real-life consideration, a one-second thumbs-up rather than a speech about the fact that the UK is heading for 40% child poverty due to Tory policies, the wrong things get noticed. Entertainment should have no place in politics, but it's a bit late for that now.

Truth versus entertainment is, naturally, a problem in historical fiction. Part of the unwritten contract between novelist and reader is that we have to remember that you want to be entertained. If we did not want to entertain, we would write the sort of musicological tracts that I have often ploughed through in the past year or two for the sake of this book. The dessicated text sometimes needs to be decoded with a musical Enigma machine, and ultimately communicates little to our life experience unless we are music faculty PhD students. I can't even use them for programme notes these days. That writing of course has its place - which is not here.

So - yes - entertainment is required for a novel, even if it is about music. Does that mean not letting the truth stand in the way of a good story?

Here the waters become still muddier, because around the Immortal Beloved, nobody can say with 100 per cent accuracy that they know what the truth is. That's probably because Beethoven on the one hand and the woman's family on the other did an extremely good job of concealing it. This provides a good reason to tell her story as fiction - because essentially, barring a remarkable discovery in someone's attic, it always will be.

As for Beethoven, he too has fallen victim to the entertainment of disinformation: it has always been more popular to think of him as a furious grouch than to look at the many facets of his actual personality. I've found him to be a misunderstood, principled individual whose isolation was the result of his debilitating deafness and the fact that he was always an outsider in Vienna. He was kind and generous; his friends were devoted to him; women and young people loved him, and he loved them. Yes, he had one heck of a temper, bore lifelong grudges and drank too much. I can't say I blame him.

So... there are two contracts to fulfil in IMMORTAL: one with the requirements of a story based on fact, the other with readers wishing for entertainment. This is why I've written, for once, in the first person. I am, dear reader, your classic unreliable narrator. And I have some remarkable stories to tell you...

A quick PS re the Handel grilling. I feel a teensy bit vindicated. Recently BBC Music Magazine ran a feature in which around 100 contemporary composers ranked the composers through history who have influenced them the most, and the staff then crunched the numbers into a top 50. Bach was number 1. Handel was...not there at all. Brahms was high on the list. Bruckner was...absent. And Beethoven was, if I remember correctly, number 3.

If you've enjoyed this post, there's still time to get your name into IMMORTAL as a patron: simply visit the book's page at Unbound and click on the pledge level you want to set it in motion.