Is Beethoven actually trying to kill me? 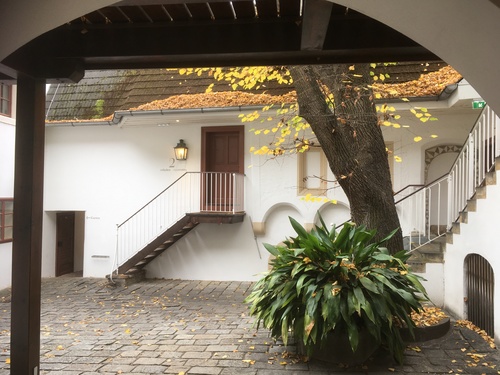 (Above: the house in which Beethoven wrote the Heiligenstadt Testament in 1802. It was behind a bakery at the time.)

This is your Friday update, except it's Monday. I came home from Vienna on Friday evening sick as the proverbial dog and barking like one. I was already unwell when I set off the previous Sunday; charging around the city, trying to see everything, walking about 7 miles a day during a nasty cold snap, did me so little good that I wondered if Beethoven is trying to kill me.

Nevertheless, it was worth every second, because this trip will radically transform the atmosphere of IMMORTAL. Seeing what's available of the pleasant yet very plain apartments that the composer lived in, then visiting the former residences of his princely patrons in a grand city centre where palace piles up next to baroque palace, hammers home the desperately divided nature of that society. Among his chief supporters, Prince Kinsky's extravaganza is phenomenally OTT; Prince Lobkowitz's odd corner block is rather more tasteful (it is now the Theatre Museum, which is handy); and those are just two examples, neither of them the most extreme. 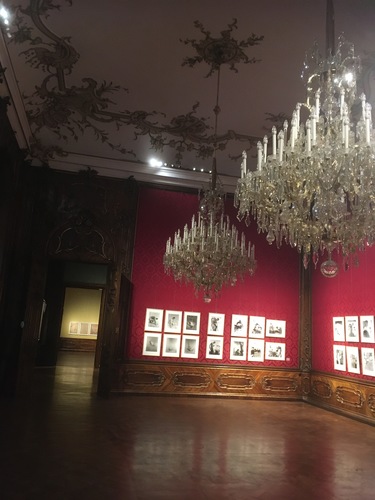 (A palace interior, now hosting a gallery - I can't even remember which one... Get a load of those chandeliers.)

The fascinating thing about research trips is that what you learn is never quite what you were looking for. One of my most startling impressions was that for tourism purposes, Beethoven is nowhere to be heard (seen, yes; heard, no.) Wherever you find a touristy concert in a church or palace, they are playing... Mozart. Occasionally Haydn, sometimes even Schubert. But Beethoven? Dearie dear - you have to go to the Musikverein or the Konzerthaus to listen to his music. You won't stumble upon it in the street. Nobody touting for tourists' business near the Hofburg is going to say to you "Psst, wanna hear some Beethoven?"

So is he too difficult? Too demanding? Too German? Too...foreign? Beethoven was indeed a foreigner in Vienna. He was an immigrant; he arrived as a student and never went back to Bonn. If not exactly a refugee, he was certainly reluctant to go home after Napoleon invaded the Rhineland (even though Napoleon was his hero for a while). The Brunswick sisters were similarly outsiders. Vienna would have been as foreign to them, from Hungary, as it was to Beethoven.

Much is intact; much is not. Beethoven's longest place of residence, the Pasqualati House, is high on a hillock beside what used to be the city walls; he would have gazed out over the Glacis and the Prater towards the Vienna Woods from the top floor flat. Today you see only Vienna University, constructed directly opposite some decades later. Josephine's house, the Palais that her first husband built and where she lived on and off for the rest of her life, is long gone, demolished in the late 19th century. On its site you can now find a McDonald's.

But if you walk through the back streets, you come across lanes little changed since the 18th century; straight, well-proportioned channels lined with elegant buildings and occasionally opening onto a cobbled square beside an ancient church. In one such location you discover what used to be the university, run by the Jesuits in Beethoven's time; today it is the Austrian Academy of Sciences. "Beethoven? Oh, you'll want the first floor," says a remarkably relaxed gatekeeper. "It's open, just go in." And there, in what's now a ballroom and lecture theatre, equipped with state of the art AV equipment, is the room in which Beethoven premiered his Symphony No.7 - and in which a gala performance of The Creation was held in the presence of the elderly Haydn himself. There Beethoven broke through the crowds to kneel at his old professor's feet (and not before time).

One could not help noticing that these are some massively significant occasions in the history of music - yet there was nobody else around. I didn't even know, previously, that this place existed.

Vienna is a layer cake of a city, its historical strata spreading one on top of the other. Century piles after century. The reason I haven't seen the Beethoven sites before is that whenever I've been there I've been looking for Korngold or Mahler or Johann Strauss, or celebrating new year waltzing round the Rathausplatz. My souvenir this time? A Klimt umbrella. Beethoven is subsumed, in a way, beneath everyone he influenced. 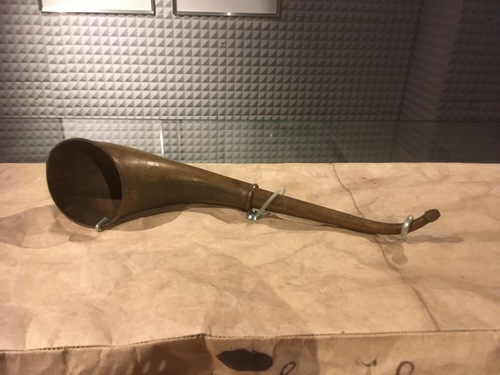 The place has its advantages - including a fantastic, easy-to-use public transport system and two of the world's best concert halls - but also its drawbacks. For instance, my specific annoying dietary problem is easier to solve even in Hungary than it is here (honest, guv, in Budapest I found a gluten-free bakery on Andrássy Boulevard). Eventually I came across a vegetarian buffet on the Schottenring that had a good selection, but I've never before eaten so many beans in three days. Otherwise it's tafelspitz or risotto; occasionally a gf cake if you're very lucky.

Now I am back and setting to work not only on my target of finishing the first draft before Christmas, but also the remedial updating necessitated by the insights of this past week. My feet are covered in blisters, I'm coughing something chronic and I need to sleep for a fortnight, but fortunately writing takes place indoors. If Beethoven is trying to kill me, he hasn't succeeded. At least, not yet.

Onwards and upwards! Thank you again for all your fantastic support, both moral and financial, and see you soon.