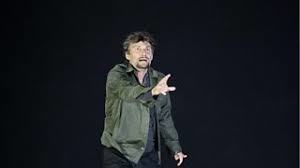 With the Beethoven 250th anniversary coming up next year, just about every opera company I can think of is preparing to stage Fidelio, and plentiful orchestras are planning concert performances. It is the only opera Beethoven wrote - or at least, the only one he completed.

He started another, earlier, entitled Vestas Feuer, set in ancient Rome. The libretto was by Schikaneder (of The Magic Flute fame) who was employing him as composer quite literally in residence at the Theater an der Wieden - Schikaneder was artistic director there and Beethoven moved into an apartment in the theatre to set to work on the piece. The libretto did not inspire him, to put it mildly. He said it was "only fit for washerwomen". Fidelio followed - with a long history of fits and starts, invasions and censorship; after flopping in the midst of the first occupation of Vienna by Napoleon, it did not reach its final form until 1814.

I'm puzzled - exceedingly so - by the complaint I always hear about Fidelio: people almost invariably say they admire the music, but find it unsatisfying as a drama. I simply do not understand this. What is there to be unsatisfying? It sometimes strikes me that this is one of the few operas that features a strong, brave heroine who wins against all the odds. Can it be that most opera fans like the wilting 19th-century flowers who die of consumption, go warbling mad or meet a violent end at the hands of the men in their lives? Or is it that Florestan, being jailed, never has the chance to do very much except long for Leonore to rescue him? You'd think this aria (sung in this extract from the Salzburg Festival by Jonas Kaufmann) would be enough of a challenge to keep him busy and his listeners happy, though:

The story is based on a French play that itself was apparently taken from a real incident during the French Revolution. Because of the official censors - every artistic product of words, music or images in Vienna had to be assessed by censors at the time - Beethoven and his librettist elected to set the piece in Spain instead of France, which did not help very much; it also accounts for the lack of specificity about the political background of the story. We never find out what Florestan did to make Pizarro hate him so much, other than - one infers - being some kind of freedom fighter. That doesn't help either.

Or does it? It opens the door for directors to take a view on the story and bring out its power in new ways of their own. Sometimes, of course, it's flunked. I've seen a ridiculous number of daft productions over the years, perhaps the nadir being the time Covent Garden had little Blakeian red and green demons strutting around the final scene on stilts, honest guv. The audience laughed aloud. You might want Blake, but you don't want that. I suspect that next year will bring up some better takes, and that many will be interesting, provocative and, if you'll excuse the term, "relevant".

I love Fidelio with a passion for its idealism: its extolling of liberty and love, its message of resistance to tyranny and its iron core of devoted love. Its dignity. Its humanity. And, yes, its drama.

And Leonore...who is the devoted wife Florestan longs for? Is she inspired in some way by the 'Immortal Beloved'? No prizes for guessing...but you'll have to read IMMORTAL to find out.

Again, thank you all for your support for IMMORTAL, which is halfway towards its funding target and now just needs the other half! If you haven't pledged yet, please feel free to do so.