Here's a little truism for a Friday lunchtime. Our sheer reverence towards the great composers of the past sometimes interferes with our understanding of their work. Occasionally it even affects performances of them. Do you agree?

Last year I undertook a project for BBC Music Magazine, comparing recordings of Beethoven's "Hammerklavier" Sonata and choosing the "best" (I use inverted commas with reason - it could only ever be my choice, rather than something provably empirical). It served me right for once naming this piece as the greatest piano work ever composed; I had to bite the bullet and do it. (You can read it here.)

I listened to around 50 recordings. It shouldn't have been easy to choose a winner. But it was. Peter Serkin's recording from the mid 1980s on a piano of Beethoven's time stood out by miles to my ears: the music rocketed out of the instrument as if heading for outer space, not merely fresh and startling, but utterly volcanic. You might feel you were sitting next to Beethoven himself as he played it. There were many other versions I'd describe as good, or very good. But there were also some in which nice, middle-class performers played reverent, kow-tow accounts: desperately correct and totally missing the point. This is radical, elemental, furious, passionate, despairing music and if it doesn't sound that way, why bother learning all those notes?

It's slightly the same with musicology. Sometimes there are deep, dark questions to ask, ones that challenge our preconceptions of people, creators, whom we have transformed into a pantheon of Apollonic gods. Beethoven is one of the first among them. We know he had a temper, that he drank too much, that he was deaf and impossible and angry. But we still treat him with kid gloves. Yes, he was a mensch: a man of great ideals, both political and personal, and a touchstone for the resilience and spiritual strength that we all respond to in his music. But can we ever be certain of what he was thinking? Did he tell the truth, the whole truth and nothing but the truth, on every occasion? And did his associates do so too? Caution!

Take this one incident, which I've touched on recently in the first draft of IMMORTAL. And have a listen to the work in question: the Piano Sonata in D minor, Op.31 No.2 - here is a video of Barenboim playing it.

It's often called "The Tempest" - because Anton Schindler, Beethoven's sometime secretary and early biographer, told the story that he once asked the maestro for the "key" to the work and was told "Read Shakespeare's 'The Tempest'". As a consequence we try to find in it Shakespearean soliloquies, deep meditations on power and magic, and the storminess of the seascapes from Prospero's island.

It's possible none of that is there at all.

Schindler was notoriously unreliable. He told porkies by the pile, destroyed material including some of Beethoven's conversation books (his visitors wrote their questions and responses down for Beethoven after he could no longer hear them), and essentially he can't be wholly relied on at any time. Yet for a while he knew the composer as well as anybody ever did. Everything has to be weighed up.

What would Beethoven have said to him? He wouldn't have said "The Tempest" in English. He'd have said "Der Sturm" in German. And "Sturm" could mean a multitude of other things. How can we be sure he really said "Shakespeare's" Sturm? How can we be certain that that was not simply Schindler's misinterpretation of "Read Der Sturm"? 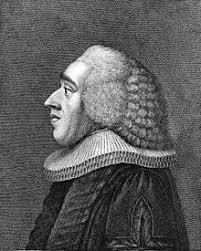 One of Beethoven's favourite poets was called Christian Christoph Sturm (1740-1786) (pictured above), a German preacher and author best known for a tract called Reflections on the Works of God in Nature which we know definitely did have a profound influence on Beethoven - because among the composer's possessions was a highly annotated copy of the book. Having played the sonata (in my final recital at university) and read a bit of CC Sturm, I would be happy to place a bet that the reference to Shakespeare might have been a little bit of poetic licence from Herr Schindler.

Unfortunately most of us do not read obscure German religious poets today. Therefore it's a lot easier to stick with the famous Shakespeare and not ask the question: did he really say that? Did he really?

Because of the nature of musicology - that we can only go by what is down on paper and must never add two and two together in case we make five - even if we do actually make four - it is easier by far to ask these questions in the course of a readable, accessible novel in which Therese and Josephine, playing the work themselves, can do all the adding we need. So the question is asked. It doesn't matter if it is answered or not. It doesn't matter if their interpretation is wrong. The question has to be asked: did he really?

Also want to ask how to get a copy of your “Hammerklavier” article. As soon as you mentioned it in your blog last year I tried many times, many ways, to contact the magazine to buy a copy, but never got a reply. I’m in the US, but don’t see why that should be a problem. I would appreciate any suggestions. Thanks. ........Barbara Urban (New York)

Hi Barbara,
I've updated the article with a link through to the Barenboim video - for some reason the page told me that the video had attached successfully, but it evidently had not. I'm sorry about that.
Meanwhile, thanks to your query I have discovered that my Hammerklavier article is actually available online! I didn't know it was. Here you go: http://www.classical-music.com/article/best-recordings-beethovens-hammerklavier-sonata (you might need to copy and paste this link - but I'll try and add it to the blogpost too).
Many thanks for your interest and your support.
All the best,
Jessica