Today is the 200th anniversary of Clara Schumann's birth. I was looking for a portrait of her to put on my blog, JDCMB, and found that she had been painted as a young woman by the same artist who created the portrait of Beethoven that we use in the IMMORTAL introductory video: a gentleman named Granger. 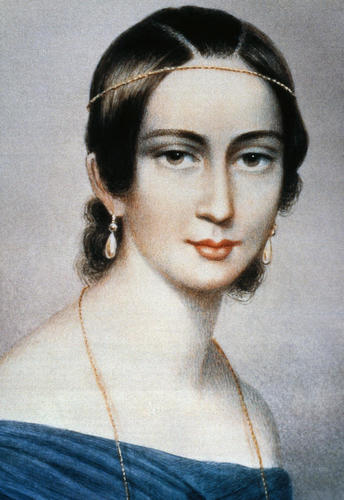 When Beethoven died, Clara was eight years old, and Robert Schumann sixteen. Robert was devoted to and inspired by Beethoven to a great degree - indeed, he offered his Fantasie Op. 17 to the publisher who was trying to raise money for the Beethoven memorial in Bonn, but they turned it down. (Publishers do sometimes get things wrong...)

This extraordinary work bears some hallmarks of Beethoven's influence, including the heroic central march with its continual dotted rhythm, which feels akin to the second movement of Beethoven's Sonata in A major Op. 101; but there is a still more direct connection, namely that Robert quotes a theme from Beethoven's song cycle An die ferne Geliebte - the final song with its words, "Take them, then, these songs that I have sung for you...". The pair of lovers, though separated, are united by the music. When they sing the same song, they are together, however great the distance between them.

Robert appropriated this theme as his message to Clara, whose father was fiercely opposed to their marriage and had forbidden contact between them. And yet the impassioned composer probably had not the slightest idea that Beethoven himself was using the theme and the cycle from which it's drawn for a very similar purpose.

The melody is significant, and especially the melody of the first song in the cycle. It is closely related to that of the final song, which is the one Schumann quoted directly.

Here's the Beethoven cycle, sung by the incomparable Fritz Wunderlich with the pianist Heinrich Schmidt. https://www.youtube.com/watch?v=rUdpQJB-b2A

Here's Schumann's Fantasy in C major, played by the great Hungarian pianist Annie Fischer (I was very pleased to find this, since Fischer is not nearly as well remembered as she deserves to be!): https://www.youtube.com/watch?v=Cq1XTh2U4pc

It is not rocket science to spot the theme. But in the Beethoven, pay special attention also to the first line of the first song. Its second phrase, with the repeated rhythm on descending harmonies. Then listen to this:

Sound familiar? It's the Andante Favori, a piano piece that Beethoven wrote supposedly for the Waldstein Sonata's slow movement, in which it gels not at all. It exists instead a stand-alone andante, and he sent it to a woman...with the words "here is your - your - andante".

That rhythmic cell that it shares with the song cycle is what sparked off IMMORTAL...

I am moved by the idea that Schumann tapped into the same wellspring as Beethoven for his own immortal beloved, Clara Wieck, and the notion that only about 10-12 years after Beethoven's death, that message of love was renewed like a phoenix by another composer of genius - one who eventually died just a short drive away from where Beethoven was born. Endenich, the site of the mental asylum in which Schumann breathed his last in 1856, is today a suburb of Bonn. Beethoven had never seen Bonn again after he moved to Vienna, but he was often homesick for his much-loved Rhine. The Fantasy might have been known, and played, by people connected to the Beethoven history - but how much did they know about it?

If you would like to read more about Clara Schumann's musical influences, there's some more - in similar vein to this, but about a very different piece - on my blog, JDCMB, today at this link: https://jessicamusic.blogspot.com/2019/09/clara-at-200.html

I hope you've enjoyed this little musical excursion for our Friday update. Thank you again for all your support for IMMORTAL, both moral and financial! And if you haven't yet pledged, please think about doing so... you can simply pick your preferred level from the list. (NB, the Early Bird discount paperbacks are not unlimited, so if you want to grab one, best do it sooner rather than later!)

With love and best wishes as always,