A composer for our testing times 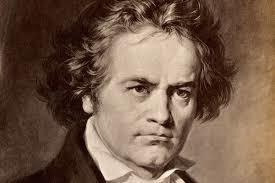 At the moment, watching the heinous goings-on that pass for running our country, it would be easy to despair and to think that writing a novel about a 19th-century composer is a futile distraction. Fortunately, though, our composer is Beethoven - and there is no better music to bolster idealism, determination and resilience than he.

Have a listen to his Egmont Overture, played at the Proms the other week by the West-Eastern Divan Orchestra conducted by Daniel Barenboim. It was their encore, so if you go to this link you'll find it at about 2:08:00 https://www.bbc.co.uk/sounds/play/m0007lj7
Egmont is a play by Goethe: a great tragedy about a freedom fighter who makes the ultimate sacrifice, but never gives up.

It is worth remembering a few things that proved Beethoven's resilience. He dealt with:
An alcoholic father
The death of his mother
An awkward social persona
Deafness
The collapse, because of that, of his career as a pianist
Falling in love with a woman he could never marry
Suicidal impulses, which he conquered through devotion to his art
Violent disillusionment with his former hero, Napoleon
The shelling of Vienna in 1809 (he had to shelter in his brother's cellar)
The collapse of the currency in 1811-12
The ignominy of being financially dependent on aristocratic support
Frequent ill health, including chronic stomach condition
Innumerable fallouts with friends and supporters
Increasing isolation
The disaster of trying to adopt his nephew
The possibility that he had a child. And knew it. And could not be part of his child's life.
Alcoholism, it seems
Liver disease (which defeated him in the end).

A little anecdote for you. A few months ago I went to a dinner party and found myself in a vipers' nest of hardline Brexiters - many of whom I had known for years, indeed decades, and used to like and respect before the ill-planned referendum plunged this particular dagger into our country's innards. Experiencing a sudden insight into how deeply the rot has set in, and into what it must have been like to be Jewish in the Weimar Republic shortly before Hitler came to power, I considered walking out. First, I paid a visit to the downstairs loo. In the cloakroom there was a small statue of Beethoven.

I stayed in there for a while, meditating on this image, trying to 'hear' what Beethoven would advise. He had no time for politeness when none was deserved, one knew that much, but he stood his ground. He would stay. He would be resilient. He would hold his head high and never give up. (That's what I thought on the day, at least. Now I suspect he would probably say exactly what he thought, pulling no punches, then crash out into the night, walking home for many miles in the pouring rain - which is what happened when Prince Lichnowsky tried to force him to perform at a soirée in his country palace... ) Either way, he would be true to himself, his ideals and his inner strength.

You can hear that integrity, determination and noble spirit in every one of his works. If that isn't "relevant" now, I don't know what is.

Huge thanks and great hugs to everyone who has supported IMMORTAL already. I'm delighted to report that after one month the book has reached an amazing 72 per cent of the fundraising target - thanks to your extraordinary generosity and enthusiasm for the idea. The writing is progressing well. I am around halfway through and loving every minute of it - except those moments when I realise I must leave out something I would like to include if I were writing a book that could run to a thousand pages, which unfortunately I'm not. If you haven't already pledged for the book and your appetite is whetted, please take your pick from the numerous different levels and rewards that you'll see to the right of the page (NB if you only see two levels when reading this update, please click on the word IMMORTAL at the top of the page and it will take you to the main project where you can see them all).

This has helped me so much, thank you. I have loved Beethoven's works all my life - literally as my mother played them constantly and the Emperor and Pastoral are my first musical memories. So looking forward to the book.