It's been a long journey (not physically as it just involved three trips to London) to create The Hush-Kit Book of Warplanes –and fingers crossed my input and part in volume 1 will soon be over, meaning the book is nearing completion. It has been a long time since my first meeting with Rowland 'Vulcan' White metres from the first RAF headquarters on the Strand in London, where he suggested this project. The end is in sight.

The week before last, I worked through editorial feedback on 194 pages from the eagle-eyed team at Unbound. Working through this involved a great deal of coffee, wine and debate, but it was back with them in a timely manner. I've also approved the final design style and it looks fabulous (and I don't throw around the f-bomb willy-nilly). Updates to diagrams to reflect the latest developments have also been made.

The next stage will involve captioning (once the designers have made the final selections from the photographic options I've given to them) and approving the final designs. I will also have the pleasure of selecting the aircraft types to go into the trumps card game sets and furnishing their specs: Do not be surprised if I slip the Edgley Optica into an inappropriate pack. I will be sure to make sure a few more obscure types get in the trumps packs, at the expense of the usual A-listers. I'm not sure exactly when we will freeze the design from featuring the name of supporters, but it will be soon. I would encourage you to tell anyone who might want their name to be included in the book who has yet to pre-order to get a move on.

I'm delighted to announce that The Hush-Kit Book of Warplanes Vol 2 has reached 35% funding, huge thanks for this. I have fought for a tighter release schedule for volume 2 but this will require it to reach 100% funding soon, if you wish to (and it will be a remarkable book) you may pre-order your copy here.

In these terrible times, we see the power of warplanes both to destroy and to defend. Sadly the subject of military aviation remains as relevant and vital as ever.

Thanks again to all our kind supporters, wishing peace and safety to you and your loved ones, 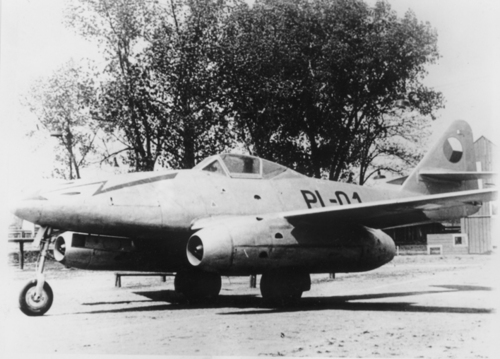 On liberation, Soviet forces seized all the German tools, jigs and components for Me 262 production they found in Czechoslovakia. These extremely useful scavenged parts were gifted to the new Czechoslovakian government. Avia had enough parts to build 19 aircraft. There is some debate as to whether this small force was active in 1949 (some sources say 1950). But it is interesting to note that four years after the War, what was essentially a Me 262A was still an effective fighter. With a top speed of 560mph it could decide when to fight, even against the most potent piston-engined fighters in service such as the Sea Fury, Twin Mustang, Bearcat and Sea Hornet. The inclusion of the S-92 above the finest piston-engined is debatable, it could be said to depend on whether you want greater speed performance with shitty BMW 003s which nobody would trust to keep running for very long or better range and utterly reliable engines. In general, it is probably fair to say a pilot would have been safer in peacetime in the final piston aircraft, and safer in a dogfight in one of the early jets, with his superior speed enabling him to dictate whether to engage. It is on these grounds that the questionable S-92 and lamentable MiG-9 are chosen over the wonderful final aircraft of a dying generation.

The S-92 had the advantage of a swept wing, still a relatively novel feature for fighter aircraft of 1949. Yugoslavia expressed an interest, but with the arrival on the scene of new Soviet designs, this did not happen.