How to Have an Almost Perfect Marriage

Mrs Stephen Fry's guide to an almost perfect marriage, just like hers...

(with deep gratitude and sincere apologies to dear Dr. Seuss) 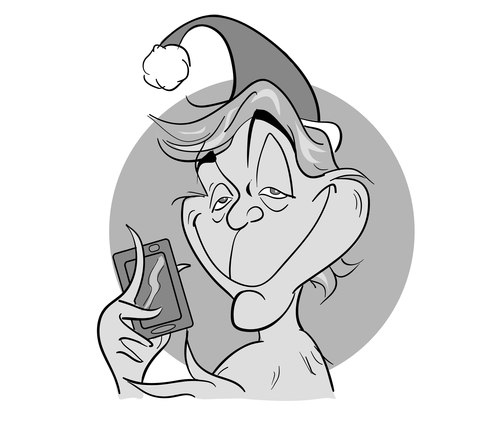 Every Twit down in Twitville

Who lived just North of London,

No-one quite knows the reason.

It could be his laptop

Wasn’t plugged in quite right,

It could be perhaps

That his pants were too tight.

But I think the most likely reason of all,

May have been that his dongle was two sizes too small.

His dongle or pants,

He stared at the screen,

Having one of his rants.

He started to shake.

This is too much to take!’

Then he growled, with his Frynch fingers nervously drumming,

'I MUST find a way to keep Twitmas from coming!’

For tomorrow he knew all those twittering nerds,

Would wake bright and early, like little blue birds

For the Twits young and old would sit down on their seats,

And the more the Frynch thought of this whole Twitmas row,

The more the Frynch thought, 'I must stop Twitter now!

Why for more than three years, I’ve put up with this crap.

Then he got an idea!

More devilish than anything got in Ikea!

And he grabbed some bin bags

And some old empty cases,

To see all their Twit faces!)

And off, with a smirk, that naughty Frynch crept,

To the place where he knew all those silly Twits slept.

Then he slithered and slunk, with a smile like a snadget,

Around the whole town, and he took every gadget!

He took all the mobiles, he took the PCs,

He took all the internet-ready TVs.

He took the iPhones, the iPads and iPlops.

And when he had grabbed all the items above,

He started to take other things the Twits love,

He took all their LOLs and their LMAOs,

He stole their hash tags from their little hash toes.

He snatched their Retweets and their mentions and then

He kidnapped their followers, erased their Dms.

All went in his sack, which he threw in the Thames.

Then he sat on the bank and he nervously waited,

With his lip fully bit and his breath fully bated

Until the sun rose. But then the Frynch frowned,

All the Twits down in Twitville, the princes and bums

Were talking - without a device near their thumbs!

They chatted, they laughed, they guffawed and they chortled,

They sang and they shouted, they sniffed and snortled.

The butchers, the bakers, the students and tourists,

The housewives, the bankers, the fish pedicurists,

The teachers, the stalkers, the geeks and the druids,

And the Frynch heard this sound, this unheard-of kerfuffle,

And he frowned and he blinked and he started to snuffle.

He HADN’T stopped Twitmas from coming!

Somehow or other, it came just the same!

The Frynch groped for hours, 'till his dongle was sore.

Then the Frynch thought of something he hadn’t before!

'Maybe Twitter,’ he thought, 'doesn’t come from a phone.

Well, in court they did say

That the Frynch’s small dongle

And the minute his dongle had started to swell,

He looked at the gadgets and cried 'Bloody Hell,

What a silly old git!’ and he fell to the floor,

'What a nitwit-tit-git I have been, that’s for sure!’

And ashamed and aroused, he went back to the town,

Dongle proudly erect but his head hanging down.

Bear to forgive me, this silly old Frynch?’

And the Twits took one look at this figure forlorn,

With his chin on his chest and his confidence torn,

'Well, it’s true’ they replied, 'that we do need some closure.‘

So they jailed him for theft and indecent exposure.

Very naughty frynch, did it grow more than an inch?

Is the Frynch available for parties???

After 45 years it is amazing how the voice in my head while reading this turned into Boris Karloff....BRILLIANT!

Hillllarious! Thanks for a great start to my Christmas Eve!

Cant stop giggling at this! So brilliant and funny! :D Made my twitmas! @cartoonsbyRic

Oh Edna, you are full of wittiness and brilliance! You are the most perfect wifey a hubby could have. Happy Holidays! x x x

Seriously such a fantastic poem this has REALLY made my Christmas :) Merry Christmas y'all :) Thank you so much Mrs Fry :)

fantastic - you are an amazing wordsmith.

Oh my absolute goodness! Very cheeky and very funny. Thank you for the share and your clever assembly of words! ~.^