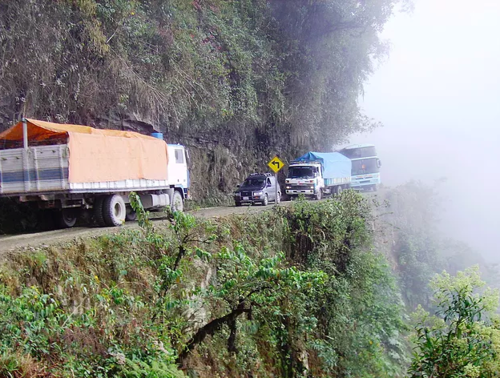 In order to do this post I have to go back a bit. At this moment I am in India, having arrived here from China this morning. But for now I have to go back to Rwanda. Back to a sleepless night in Kigali soon after having returned there from Gisenyi close to the DRC border with Rwanda. I had been working in the remote rural area around Lake Kivu for days and was relieved to be back at the hotel which had begun to feel like a home from home. It was around midnight when I suddenly realised that I had, at dawn of the same day, breezily wished my son (via Skype) a fun time on his excursion along Bolivia’s infamous Death Road. It began to dawn on me that I had been so preoccupied with my own work that I had failed to do much research on where my son was headed. The little I had done, had shown some kid riding through a forest on a mountain bike. But now I had some time, it was late, I was having difficulty sleeping so I clicked onto my laptop and no sooner had I entered Death Road into google, my heart began to beat a little faster. Apart from the alarming images brought swiftly to my attention, I raced through scary statistics and then read about racketeering tour guides who made trail blazing, gung-ho, death defying young tourists sign insurance documents that took their money and alleviated them of any responsibility lest they arrive back in a coffin. The info sent shivers down my spine as I concurrently went into panic mode. I had chirpily said ‘darling just send me a message that you’re alive’.

At 1am I checked the time difference and by my reckoning Gabriel had either fallen off a long edged cliff or he had miraculously finished ‘la ruta’. I frantically began to try and reach him – email, viber, Skype, Facebook. By 2am I was in full meltdown mode,  hyperventilating under my mosquito net and berating myself for being a wholly irresponsible mother. At 3am I sat bolt upright as I heard the gentle ping of some cyberspace communication. “Alive” read the Skype message. Feeling a flood of relief, I dialled through. “You shouldn’t believe everything you read on the internet”, Gabriel said, an audible hint of irritation in his voice, “to be fair, it’s not that dangerous – mainly Israelis die there – it’s something to do with them and their state of mind when they come out of the army. I think they just love the edgy nature/cheap everything after years in the military.”

When I could finally and gratefully allow myself to sink into the arms of Morpheus, my last wakeful thought was a half conscious one about why I had not tried to stop him in this tracks. “Aren’t we such globetrotters”, we had joked some days ago, reminding ourselves how exotic it was that we were both on the equator in far flung destinations. 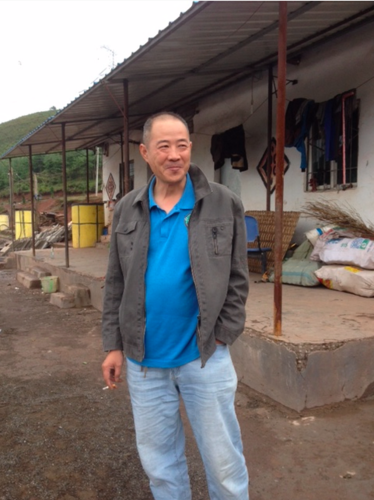 What I didn’t know at that point was that I had, only days previously, been on the first of my many ‘Death Road’ experiences myself. In the high mountains above Northern Rwanda overlooking Congo we had traversed dirt roads that twisted round the peaks, avoiding large and smaller pot holes and creeping close to the edge devoid of balustrades. I dared not look down as the jeep arched at a crazy angle. I tried to hide my anxiety as I joked with the driver about precious cargo on board, my subtle hint at safeguarding my survival. I had the statistic in my head about Suzuki 4×4 jeeps being the make of car most likely to overturn. On one lunch break in Musanze Pierre ordered a Guiness and coke. “At lunchtime?” I enquired judgementally given that we still had an afternoon’s hard graft ahead. “Yes”, he replied “if you’re gonna have a car accident it’s better to be drunk and loose – apparently drunk people have less serious injuries because they’re relaxed….better order another one.”

In China our FXB host, Bruce Lee met us at Xi Chang airport in a pick up truck. The sky was grey and a drizzle of rain persisted. Mr. Hu was our driver. A chain smoking social worker turned driver. Or it might have been the other way around. Driver turned social worker. Anyhow, that day he was our driver. Mr. Hu and Bruce Lee had constructed a tarpaulin across all the bags on the back of the truck. We knew we had a three hour drive ahead of us that would get us to Bu Tuo. But there was no way of anticipating the state of the road. What followed eclipsed any road experience ever experienced or undertaken. Three hours of dirt road, a genuine pot hole madness. Three hours of banging, jarring movement in a machine that threw you from side to side, up and down, side to side and up and down again, repeatedly. At one point the car handle came off in Pierre’s hand. He had been holding on so tightly in some vain attempt to hold stasis, that he had managed to dislodge it. Mr. Hu bombed the pick up truck over the endlessly uneven dirt road surface at an impressive speed as we climbed the cloudy mountain peaks taking us to levels of higher altitude. The temperature dropped. We left the humidity of Cheng Du far behind. The most terrifying moment came on the return trip back down to Xi Chang from Bu Tuo when we were about to turn a corner. A giant sized lorry was attempting to do the same thing, as was another truck. The margins were tiny and the drop immense. I am not sure how I held my nerve. Many many sharp intakes of breath as vehicles  overtook on hairpin bends, and blind corners. No barriers. No seat belts. Steep drops. Potholes. Dirt roads. Beeping horns. Speed.

Here in India and it is an all too familiar story. India comes a close second to Afghanistan in the car fatality table. There are no rules of the road. The honk of a horn is meant to alert you to the fact that you are about to be overtaken, or plain run over. I leave Puducherry (latterly known as Pondocherry), which means New Town, and is part of Tamil Nadu, later this morning. I will travel the wild  and famous East Coast road along the Bay of Bengal back to Chennai. Tomorrow I will board a flight to Calcutta and then one to Imphal, capital of the state of Manipur, close to Bangladesh. Vuyaraj (which means Prince) who is my superb FXB colleague here, has informed me that along the East Coast Road around ten to fifteen people perish per day in accidents – not surprising with the speed, the overtaking, the amount of scooters, bicycles, motorbike riders sans helmets, and cattle carts- all jostling for space on the road. Also, he tells me, “you will have another testing road experience while in Imphal”.

Life in the fast lane ain’t for the faint hearted.

My addendum to this post is this – these are the lengths that  FXB takes to get to the people that it supports and that is why it is such an amazing organisation and if any of you readers want to support it, I would urge you to do so.