Given Half a Chance: Ten Ways to Save the World

How to address the world’s environmental challenges and make life better and more peaceful for people, nature, and the planet 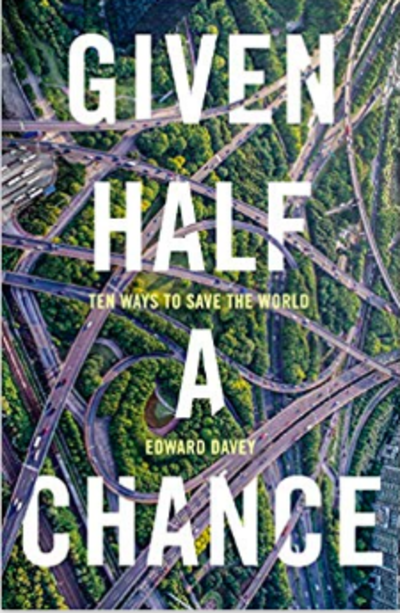 Nature
You made Given Half a Chance: Ten Ways to Save the World a reality. It's available in all good book stores now.
$15
53 pledges

Signed first edition paperback book, e‐book edition and your name in the back of the book.
$150  + shipping
16 pledges

Talk for your book club, reading group or charity/public organisations about the issues from the book, plus five signed first edition paperback books, e‐book edition and five names in the back of the book.
$750  + shipping
2 pledges

Ed will come and give a talk to your company about the issues in the book and discuss how you can adjust your practices to help save the planet. Plus ten signed first edition paperback books, e‐book edition and your name in the back of the book.
$1,500  + shipping
5 pledges

Become the patron of the book with a special page dedicated to you in the front of the book, plus 20 signed first edition paperback books, and the ebook edition.

‘A Restored Earth: Ten Paths to a Hopeful Future’ is an optimistic book about how to address the world’s environmental challenges and make life better and more peaceful for people, nature, and the planet.

The world has woken up in recent years to the scale of the environmental predicament it faces. 2015 was a turning point, in which the international community agreed an inspirational new set of ‘sustainable development goals’ and a far-sighted climate change agreement. What is needed now is to move from these commitments to action: A Restored Earth shows how.

Whether in addressing climate change, forest loss, soil erosion, fresh water pollution, the biodiversity crisis, ocean acidification, polluted cities, or the world’s waste, the solutions are at hand, and nor do they cost very much. What is needed is for us all to care – and then to make a difference, through personal action and a global response.

From the fields of solar panels in Nevada, to the indigenous peoples in the forests of Colombia; from flourishing restored agricultural landscapes in Ethiopia to the traditional water harvesters of northern Rajasthan; from the savannas of Northern Kenya teeming with elephants to the dazzling marine environment of the Seychelles; from the clear skies of the cities of Scandinavia to the inspiring waste campaigners in Britain: amazing things are happening right now, across the world, and so many are acting with great hope and great courage, against all the odds, to make things better.

The challenge before us is to go to scale and to replicate these successful approaches elsewhere, fast: this book shows how.

Humanity has in abundance the intelligence, the science and the foresight to know what needs to be done. Faith leaders are speaking up, inspired by Pope Francis’ encyclical in 2015; company CEOs, such as Paul Polman of Unilever, are also leading by example. Millions of people around the world are concerned about the global issues and also committed to acting locally. Political leaders are stepping up to the plate. We can, truly, make the difference and turn the situation on its head.

A Restored Earth shows how, in ten chapters, focusing on climate change; the world’s forests; soil; fresh water; the natural environment; the ocean; cities; waste; what one can do individually to make a difference; and by setting out a global plan. It draws on firsthand experience, interviews with many of the world’s leading experts, and a vision steeped in years of international engagement. Above all, there is a commitment to hope – it is avowedly not too late for humanity to choose the right path, but we must act now, and fast.