An anthology of short stories to aid PTSD related needs of survivors of the Grenfell tower fire and Trauma Response Network. 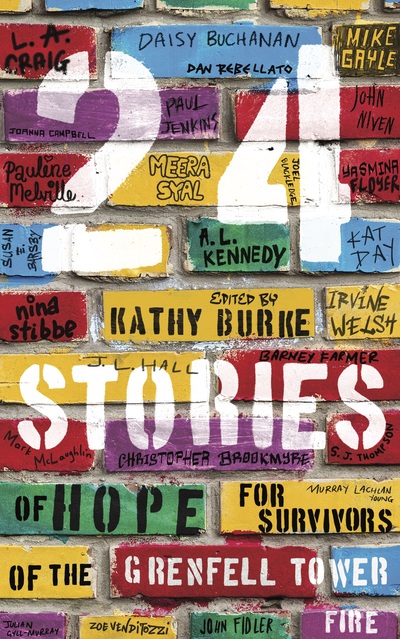 Campaigns | Fiction
You made 24 Stories a reality. It's available in all good book stores now.
$15
111 pledges

An A4 fine art print of the book's cover artwork, plus signed 1st edition paperback (by as many contributors as possible) and ebook edition
$225  + shipping
3 pledges

Two tickets to the London launch party (travel and accommodation not included), plus two signed 1st edition paperback (by as many contributors as possible), and ebook edition
$1,500  + shipping
1 pledge

A special thanks printed in the front of the book, two tickets to the launch party, plus ten signed 1st edition paperbacks (by as many contributors as possible) and 10 ebook editions
$7,500  + shipping
1 pledge

Contribute a significant amount to make this book happen, plus a special thanks printed in the front of the book, two tickets to the launch party, twenty-five signed 1st edition paperbacks (by as many contributors as possible) and 25 ebook editions

In the early hours of 14 June 2017, a fire engulfed the 24-storey Grenfell Tower in west London, killing at least 72 people and injuring many more. An entire community was destroyed. For many people affected by this tragedy, the psychological scars may never heal.

Post-Traumatic Stress Disorder is a condition that affects many people who have endured traumatic events, leaving them unable to move on from life-changing tragedies. In the immediate aftermath of the fire, the focus was rightly placed on providing food, shelter and health care for those left homeless – but it is important that we don’t lose sight of the psychological impact this fire will have had on its survivors.

24 Stories is an anthology of short stories, written on themes of community and hope, by a mix of the UK’s best established writers and previously unpublished authors, whose pieces were chosen by Kathy Burke from over 250 entries.